Ramūnas Bogdanas
In the ideological part of his annual address, Vladimir Putin explained how spiritual Russia was and that it would never succumb to the West that has been trying to ruin it for centuries. In the economic part of the speech, he gave the recipe of what should be done to maintain prosperity. 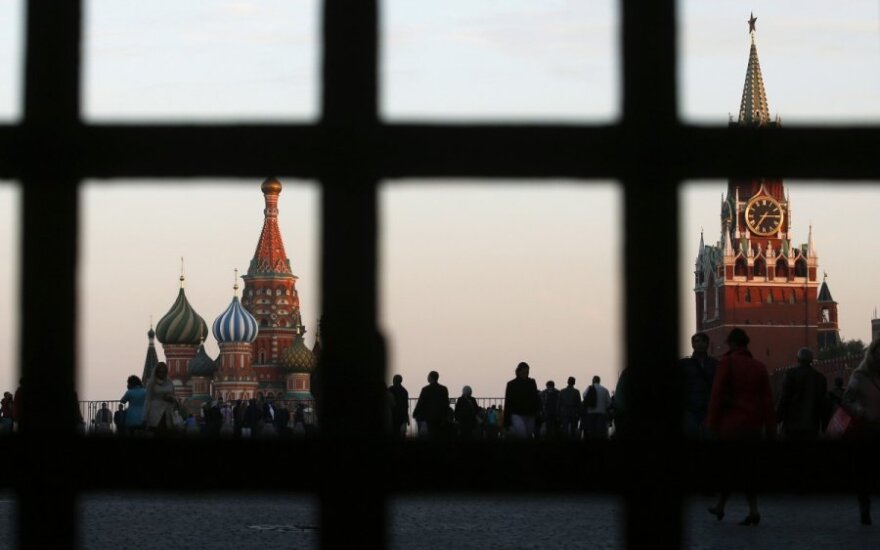 Putin has been historically lucky: it is a mere coincidence that oil prices started to soar when he took over the presidency from Boris Yeltsin, providing Russia with growing cash flow. There was a dip in 2008, but it was absorbed by an accumulated wealth fund and soon oil prices were back on the upward growth curve. Due to oil and gas exports, the rouble was stable and all this good luck was directly linked to Putin's name.

Calls to modernize the country's economy remained just words. The main job of those in power was to erect a vertical of power to accommodate the interests of various economic clans. Now, when oil prices started to fall for objective reasons, time has come to show how effective this vertical of power can be and live up to the current economic challenges with an action plan that could work.

Related articles
Brezhnevizing: henceforth and forever
Putin’s Russia. Why it is worth to reconsider links between Kremlin and international terrorism

During the times Leonid Brezhnev's mature socialism, the view of empty shop shelves began to clash with lofty slogans of how powerful the USSR was and how it was bringing peace and prosperity to the world oppressed by capitalism, leading eventually to the collapse of the soviet regime. Now, in the times of mature Putinism, slogans about the nation's power and enemies in the West are back, this time sprinkled with talks of the purity of the Slavic soul rather than communism building.

What's at play now is the same factor that contributed to the collapse of the Soviet Union - dependence on crude oil has turned sour when, following fifteen years of price growth, blobal prices started to fall. Although Vladimir Putin promised economic growth in his annual address, the Central Bank of Russia forecasts recession for next year.

We saw the end of one system in 1990, and the end of another one has started.

No one has dared to call the speech by the man at the top of the power vertical a rescue programme. Wordless reaction of the business community was expressed by the exchange rate of the rouble: on the day of Putin's address, before afternoon, it fell six percent, compared to the rate on the eve. Over the last year, November 2013 through November 2014, the rouble fell 48 percent against the US dollar. Back in November 2013, the Duma raised the minimum salary to 5,995 roubles. Today it would be equivalent to 300 Lithuanian litas.

People found themselves hit by a double-edged calamity: from one side, their income is shrinking every day, from the other, prices are sky-rocketing. For example, when US imports were banned, chicken price immediately went up by 40 percent. Growing panic is illustrated by the fact that people are massive stocking up on buckwheat. It is twice expensive now.

Putin found explanation for all this in Stalin‘s resource book: The enemies of Russia are to blame. Maybe people are pleased to hear it, but it does not solve economic problems. From the tribune of the St. Andrew Hall, in his annual address, Putin was proclaiming liberalism for business, but members of the elite must have been thinking about loyal oligarch Vladimir Yevtushenko who is currently under home arrest. His company Bashneft is in the process of nationalization. 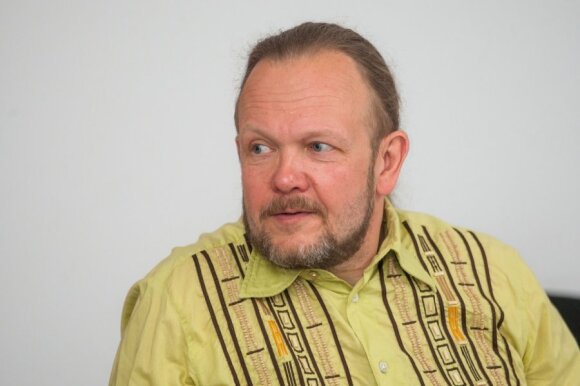 When discussing the catastrophic devaluation of the rouble, Putin pointed his finger at "speculators" who, he said, must be stamped out and everything would come back to order. According to data of the Central Bank of Russia, about 30 percent of currency now is purchased by citizens who have no trust for tomorrow. Did Mr. President have them in mind when he spoke about economic freedom?

Russian and foreign economists have pointed out that the devaluation of the rouble was triggered by dwindling oil revenues and amplified by sanctions over Ukraine. One can judge from Putin's speech that such explanations are of no interest to the president who has got his own ideas. So far the Russian economy has been able to withstand the blow, thanks to its currency reserve of USD 420 billion. But this may last only two years. A huge burden, made even worse by the financial sanctions, is Russia's foreign debt amounting to USD 650 billion.

Since the start of the adventure in Ukraine capital has been fleeing the country on a massive scale – the loss is estimated at approximately USD 130 billion. No reforms in economy are possible without capital: how to implement the proposal to be self-sufficient in everything, if import accounts for 50 percent of consumer goods and 90 percent for industrial equipment, installations? Putin proposed to replace structural solutions with, for example, improvement of roads. It reminds me of a famous highway for the Olympic Games in Sochi which cost as much as if you pave it with black caviare.

The inner circle is taking care of itself

It is impossible to improve anything in the country where state governance simply does not work, and Putin simply cannot talk about it because if the pyramid falls, he is the one to suffer. Though in his speech he declared that "relationship between business and the state has to be grounded on the common cause philosophy", quite recently Gennady Timtchenka, a billionaire from the inner circle of oligarchs, publicly refused to build a bridge from Kerch to Crimea, which had to provide Russia with a connection to the annexed territory bypassing Ukraine.

Nor is Putin's beloved Gazprom doing what it is told. Right before the announcement of the South Stream pipeline project termination, a sister company of state-owned „Gazprom“ bought a piece of land on the coast of Bulgaria where the gas pipeline exit had been planned. Though it was already clear that there would be no pipeline, the owner of the property received USD 122 million for the land he had acquired from a Bulgarian bank for 20 million, while the bank had purchased it for 3 million.

Head of Gazprom Alexey Miller publicly announces that the company has not incurred any losses due to the termination of the South Stream project: the money is purportedly spent on works in Russia, while what has to be done now is to move the pipeline extension from Bulgaria to Turkey. In the meantime, the Gas Information Agency announces about expenditures of as much as USD 4.7 billion for South Stream outside Russia.

If Putin is aware of such schemes, he should not be surprised when a state-funded project budget goes up 11 times. It turned out later that the figure was a typing error in the text of the speech, and that it had to be 1.1 times. But the president's personal experience suggested that, in Russia, an increase of a project price 11 times is very realistic. 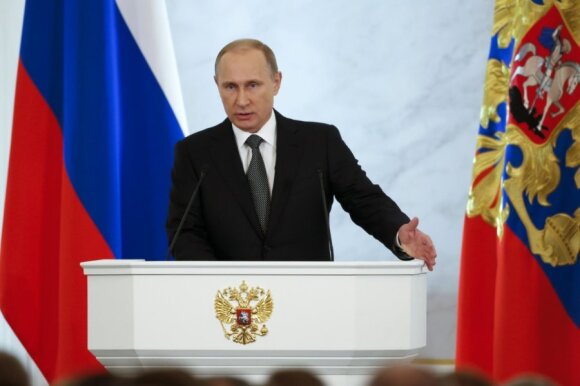 Listening to Putin's speech, I got an impression that the audience applauded most when he announced general amnesty for capital abroad. Both foreign and independent Russian analysts doubt whether it will encourage the capital to return. It represents stolen money which is kept abroad not to escape taxes, but because owners fear that it may be taken away. Why should they bring it on a silver plate?

But members of the elite in the audience enthusiastically applauded and it may be explained by the danger they feel for their money kept in Western banks because of the sanctions. The president threw a lifebuoy to his inner circle – and they applauded him for that.

Back to wearing old Russian jackets?

Since exports of raw materials quite sufficed for those in power to get richer, all talks about developing technologies and rebooting economy remained just words. What arms race with the West can we be talking about, if, according to Russians' own calculations, 80 percent of the country's military economy is dependent on Western technologies?

Russia has turned into a simple supplier of raw materials. In other words, it is just a petrol station for the EU. And things being what they are, the president starts talking not about modernising the country, but about cutting it off from the world. Against the global trends of labour division, he puts forward a challenge to manufacture everything domestically. Everyone knows that the only country that took the challenge is called North Korea.

Only it is doubtful that ordinary Russians will be willing to change back to the old Russian jackets. It was easier for Stalin to opress the people who had just experienced the horrors of civil war and any peace, even in exile, seemed better than famine, massacre and looting.

Today, millions of middle-class Russians have already experienced relatively affluent lives they have seen dramatically improve over the past twenty years. Unlike their homo sovieticus parents, they saw what life abroad is like not only in propaganda TV programs, but with their own eyes and they liked it.

In winter of 2012-2013, they went to the Bolotnaya Square in Moscow to protest against the government forging their will. In 2014, Putin proposed they exchange democracy for the idea of national greatness: "Crimea is ours."

With the economic situation getting from bad to worse, Putin's annual address sent a new message: "Western enemies are all around and they are to be blamed for everything, while I will stand to protect you and will not allow anyone to harm you." We'll see if Russians will swallow this pill, which would only accelerate recession.

This year Vladimir Putin 's annual address received particularly much attention: the leader of an...

Putin’s Russia. Why it is worth to reconsider links between Kremlin and international terrorism

It was all over the world news when Lithuanian president Dalia Grybauskaitė publicly stated that...

Lithuanian foreign minister: Nobody wants Russia's bankruptcy but Moscow must change its course

While nobody wants Russia to go bankrupt, the rouble crisis and the pending economic difficulties...