Seán O’Donnell - the Lithuania Tribune
aA
The British Chamber of Commerce in Lithuania hosted a half day conference last Tuesday (27th September), Brexit and Beyond: Political and Business implications at which the Vice-Minister for Foreign Affairs, Raimundas Karoblis joined Claire Lawrence the British Ambassador, in giving two keynote addresses. 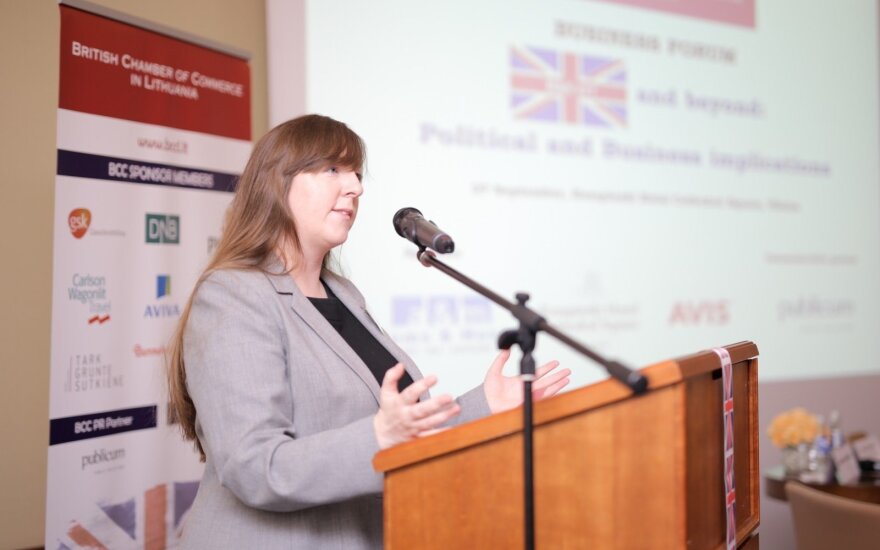 As expected the Ambassador reiterated the British government’s position on Brexit and Article 50 but was clear in her reminder that the United Kingdom is leaving the EU not Europe. Indeed she pointed out that the UK has committed spending of 2% of GDP on defence, which has still to be implemented by many other European nations, and its testament to being part of Europe is the deployment of troops in Estonia through its Framework Nation Role as part of the NATO support to the Baltic States. The ambassador continued by highlighting the ongoing work and development within foreign trade and investment and the increase of British interest in Lithuania since the referendum took place three months ago. She stressed the important role of the Lithuanian community in the UK and that their rights should be protected. (These rights however are open to question, due to Prime Minister, Theresa May’s refusal to guarantee the rights of EU citizens already settled in Britain.)

A strong EU is needed for all of Europe and for the UK despite Brexit was the final point of the Ambassador’s address, something which nobody was going to disagree with.

In his keynote address, Raimundas Karoblis reminded the audience that nobody knew what the status would be or indeed what would the relationship be based on between the EU and the UK. Switzerland, Norway, even something akin to Canada and Ukraine were possibilities. Whilst not criticising the result of the vote, Karoblis pointed out that some important questions required urgent answers by the UK government including the status of EU citizens already resident in the UK and the social impact of Brexit on pensions and benefits, and the health service and its availability to non UK citizens including the validity of the EU Medical Card. The time placed on the negotiations for exiting the EU once Article 50 has been triggered is set at 2 years but as Karoblis wisely pointed out, is 2 years enough? “Perhaps it could be 5, even longer. Who knows?”

The panel discussions developed much of the content of the addresses in more detail and Ramūnas Vilpišauskas, Director of the Institute of International Affairs and Political Science at Vilnius University highlighted the dichotomy between the EU itself and its member states. The national policy and the EU policy. Both were competing against each other and there was a lack of engagement between the two. This lack of engagement was largely responsible for the no vote particularly by those on low incomes who had no real experience of the EU in their own lives, a point borne out by a member of the audience. David Thomas from COBCOE (Council of British Chambers of Commerce in Europe) laid bare the fact that both the UK and EU were devoid of effective leadership. “There is a vacuum of leadership….no vision…no leadership” Thomas stressed the dire consequences of a hard Brexit - that is to say an agreement that does not allow for access to the single market and as a result places tariffs on imports and exports, as being an economic suicide for both the UK and the EU.

Against this backdrop of uncertainty, there are opportunities for development between Lithuania and the UK still to be had. “The UK will still be a reliable and trusted business partner” said Olga Jachimovič of Adams and Moore (UK).

Indeed whilst that may be true, and one hopes that it will continue to be the case, will the UK still welcome its European brothers and sisters with open arms, or will it enact draconian border controls because it cannot reach an amicable settlement with the EU? Will the EU exercise real leadership and effective diplomacy and see the bigger picture and indeed the potential dangers of a hard Brexit on the global economy as David Thomas suggested. Only time will tell.

Hot curry on a hot night

The British Chamber of Commerce in Lithuania (BCCL), ended their 2017-18 season with the 5th Annual...