STRATFOR
aA
In a historic referendum, British citizens voted to leave the European Union on June 23, with 51.9 percent of voters choosing an exit. For the first time since its creation in the mid-1950s, the bloc will soon lose a member. The move is triggering a chain of events that will be felt around the globe, and it pushes both Britain and the European Union into a prolonged period of uncertainty that will fundamentally change the future of Europe. 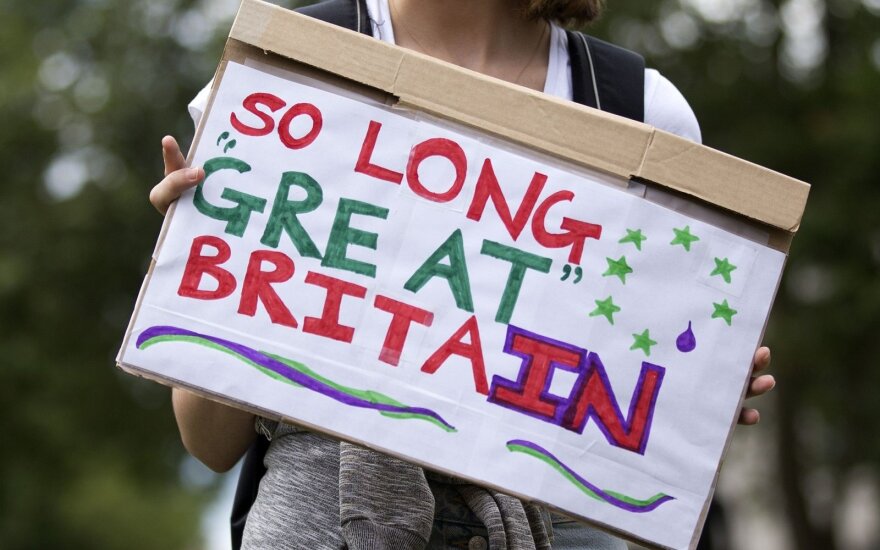 Brexit: A protester in London spells out one of the possible implications of the vote
© AFP/Scanpix

The implications of the referendum will become clear in stages. In the immediate term, markets will react negatively to the results. The pound has already fallen and was on track for its worst single-day decline in 45 years. Outside the United Kingdom, emerging market currencies and oil prices are also dropping, and stock exchanges around the world followed, with money moving into havens such as the Japanese yen and gold. In recent days, markets had reacted optimistically to opinion polls saying the "remain" campaign would prevail. This suggests that their reaction in the coming days could be particularly hard. Japan's Nikkei index, for example, has already suffered its worst single-day fall since the Fukushima incident in 2011.

Depending on the depth of the negative market reactions, the European Central Bank (ECB) and the Bank of England will have to activate emergency agreements (such as a swap operation between pounds and euros to provide liquidity to banks) discussed in recent weeks. The ECB is meeting later on June 24 to discuss its next moves. The United Kingdom has a high chance of plunging into a recession, putting the Bank of England in an incredible bind: Cutting interest rates in an attempt to mitigate the risk of recession would hurt its currency even more, creating inflation concerns. But raising them to support the pound will choke off growth.

Thus, the coming days will be marked by uncertainty, which will affect financial and economic decisions by investors and households around the world. Bond yields in the eurozone periphery are also likely to increase as investors move to havens such as Germany. Depending on the pressure on those countries, the ECB's promise to do "whatever it takes" to protect the eurozone by intervening on debt markets will be tested.

Negotiating the Details of the Divorce

From a political point of view, the referendum lead to the resignation of British Prime Minister David Cameron, who campaigned heavily for his country to remain in the European Union. Considering the frictions among the ruling Conservatives (roughly half the party's lawmakers supported the "leave" camp), new elections before the end of the year in Britain cannot be ruled out. The results will also reignite independence demands in Scotland and, to a lesser degree, Northern Ireland.

The referendum is not legally binding, which means the British Parliament could technically decide not to respect its outcome — though this would mean ignoring a vote in which more than 33 million citizens participated. The evolution of political events in the United Kingdom will determine when negotiations between London and Brussels over the withdrawal begin.

According to EU treaties, countries that want to leave the bloc have to formally notify Brussels of their intentions, but the exact moment of the announcement is decided by the country in question. Members of the "leave" camp have said that there is no need to make such an announcement immediately and that London and Brussels should be allowed some time to negotiate informally.

The formal declaration of the intention to leave will trigger a two-year negotiation period, during which the United Kingdom and the rest of the member states will hammer out the terms of the divorce and the framework of their new relationship. It is worth keeping in mind that, while negotiations are taking place, the United Kingdom will remain a full member of the European Union. The free movement of goods, services, capital and people between Britain and the Continent should remain unchanged until at least mid-2018.

Any agreements between London and Brussels will then have to be ratified by EU member states as well as the EU and British parliaments. This could further delay the exit process. In an event this unprecedented, those with a seat at the negotiating table will decide how to proceed based primarily on their interests, regardless of what the EU treaties say.

The United Kingdom will be intent on preserving its access to the EU common market, since roughly 45% of British exports go to EU countries and 53% of its imports come from the bloc. The United Kingdom's trade access will, however, need to be negotiated. The scope and depth of Britain's access to the common market will determine the extent to which the country will have to comply with EU regulations.

EU leaders will probably strike a hopeful tone about the future of the Continental bloc. In the coming days, member states led by Germany and France will send messages of unity and even portray the vote as an opportunity to continue with the process of Continental integration. But the British vote is the most dramatic event in a long process of political fragmentation in the European Union.

Eurosceptic parties across the Continent will present Britain as an example to follow and, depending on the depth of the economic impact on the United Kingdom, their moderate rivals will be under pressure to make similar proposals. One of the most critical countries to watch in this regard is France, which faces elections in 2017 and whose main Euroskeptic party, the National Front, is already calling for a similar referendum. With Britain preparing its exit, the more France drifts from the core, the quicker the foundation of the European Union crumbles.

Over the longer term, the main effect of the British referendum will be geopolitical. Without Britain, the European Union will be missing a liberal, market-friendly member, potentially shifting the balance of power in the bloc to the more protectionist economies in the south.

This could exacerbate tension between Northern and Southern Europe, which are already at odds over issues such as the Schengen Agreement and the management of the eurozone. A European Union without the United Kingdom will also be less relevant at the international level, as the bloc is about to lose one of its few members that has a true global presence militarily, diplomatically and economically.

By the time London and Brussels end the negotiations over their disconnection, the Continental bloc will look very different from how it looks today.

"What to Expect After the Brexit is republished with permission of Stratfor."