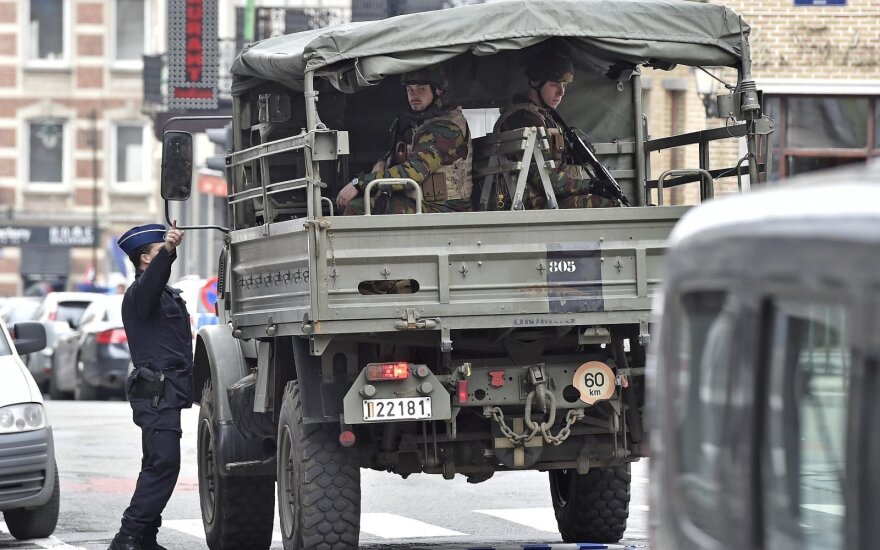 Police have been hunting Najim Laachraoui, one of three suspected bombers caught on CCTV at the airport just before the attacks.

The two other suspected airport attackers have been named in Belgian media as the brothers Khalid and Brahim el-Bakraoui.

Belgium is observing three days of national mourning after the terrorist attacks that yesterday killed at least 34 people and injured over 200 in Brussels.

Three explosions hit Brussels airport and a central city subway station in what appears to have been a coordinated terrorist attack – there is still no information on possible Lithuanian casualties.

The so-called Islamic State has claimed responsibility for the attacks and has warned that more attacks would follow.

The US State Department has issued a warning to US citizens travelling to Europe saying terrorist groups had plans for "near-term attacks throughout Europe, targeting sporting events, tourist sites, restaurants and transportation".

The Lithuanian Ambassador to Belgium told BNS he had no information yet as to whether any Lithuanians were injured or killed in the explosions.

The Lithuanian government and Prime Minister Algirdas Butkevicius are to meet today to call a national day of mourning in sympathy with the victims of the attacks for tomorrow (Thursday).

Reports now indicate that at least 14 people had been killed and over 80 injured in the attacks at the airport.

The Metro operator La Stib later confirmed that 15 people were killed and 55 wounded in another blast at the Maelbeek metro station. Now local media are reporting that 20 people were killed in the metro attack and over 100 injured.

Belgium's federal prosecutor, Fredere Van Leeuw, confirmed that the attack at Zaventem airport was carried out by a suicide bomber, writes Oliver Milne.

Belgian Prime Minister Charles Michel branded the attacks "blind, violent and cowardly" and a "tragic moment in our country's history".

"I would like to call on everyone to show calmness and solidarity", he said.

Lithuania’s President Dalia Grybauskaitė said Lithuania “stood in solidarity with all those affected” and condemned the “terrible acts of terrorism in Brussels”.

US President Barack Obama said: "The thoughts and prayers of the American people are with the people of Belgium."

"An explosion at an airport is always a horrible incident, really extraordinary. And the authorities' reaction will be extraordinary. Brussels, of course, has been through that period of fighting terrorism as one of the Paris attackers was recently detained. So, naturally, there are speculations that both things might be related. But these links will be determined by law enforcement. We are now waiting information from Belgian authorities," Varvuolis said.

Many foreigners travel through Brussels Airport which was rocked by two explosions this morning, and the bombing of the metro occurred at the Maelbeek stop, the key access point for people working in European institutions in Brussels.

Horrible news from #Brussels. If blasts are an act of terrorism, we strongly condemn it as no political aims can be achieved by violence.— Algirdas Butkevičius (@AButkevicius) March 22, 2016

Terrible acts of terrorism in #Brussels. Stand in solidarity with all those affected.— Dalia Grybauskaitė (@Grybauskaite_LT) March 22, 2016

Lithuania's State Security Department (VSD) said the terror threat level in the country is under constant review, adding that a special focus has been put on the transport system since the Paris attacks last November.

"Since the Paris attacks, the VSD and other EU intelligence services have been working on high alert, with particular focus put on the transport sector," Vytautas Makauskas, spokesman for the VSD, told BNS on Tuesday.

In his words, "the VSD is looking into various indicators within its competence. And if there's a real basis, the government would be offered to increase the terror threat level."

Security at the three Lithuanian airports have been raised following Tuesday's explosions in Brussels.

"We have strengthened patrolling and are introducing additional security measures that I cannot specify publicly," Joris Gintilas, chief of the Civil Aviation Auhtority, told BNS.

Meanwhile Gediminas Almantas, director of the company running Lithuanian airports, said that security measures at the airports of Vilnius, Kaunas and Palanga will depend on decisions of state institutions.

"We are monitoring the situation in Brussels and making decisions accordingly. There have not been any additional measures on our part so far. Aviation security organizations can make certain decisions for us, in which case we will react swiftly," Almantas said.

Minister Linkevičius: This will not stop fight against terrorism

"It is a test of our strength, but I have no doubt that this will not make those fighting against terrorism to waver," Linkevičius told BNS.

He also urged Lithuanian nationals in Belgium to follow closely recommendations from Belgian institutions and stay on alert.

Linkevičius says the Foreign Ministry is not yet planning to issue a recommendation against travelling to Belgium.

He believes that Tuesday's attacks could be a response to the capture of Salah Abdeslam, the man behind Paris attacks in November, several days ago.

Our thoughts& prayers with victims of #Brussels terror attacks. We are all affected & will stand #united! No place for #terror.— Linas Linkevicius (@LinkeviciusL) March 22, 2016

No flights between Lithuania and Brussels on Tuesday

There are no scheduled flights from Lithuania to Brussels Zaventem Airport on Tuesday. It is yet to be decided whether flights on Wednesday and Thursday will be cancelled.

Lithuanian Airports spokeswoman Indrė Baltrušaitienė says there is a Brussels Airlines flight from Vilnius to Belgium on Wednesday afternoon. The flight has not been cancelled yet.

AirBaltic has a cheduled flight from Vilnius to Brussels and back on Thursday. Ryanair is operating flights to Charleroi airport about 70km south of Brussels.

"We have stepped up protection of our sites, but without putting additional burden on the public or our officers," Skvernelis told BNS on Tuesday, without elaborating on the measures or sites in question.

He says terror alert level in Lithuania remains low and the government sees no reason to raise it.

Security institutions instructed to be on alert

"The recommendation now is that the institutions should increase their level of alertness, as the step has been taken in all of the countries of the European Union," the State Security Department's chief Darius Jauniškis told Vilnius journalists on Tuesday.

"We are looking more at crowded areas. (…) The developments in Brussels show that such places are the primary targets," he added.