BNS
aA
Belarusian swimmer Alexandra Herasimenia is seeking to pool support in Vilnius for athletes who have been affected by Minsk's repressions, and also attract the international community's attention to the ongoing crackdown on athletes. 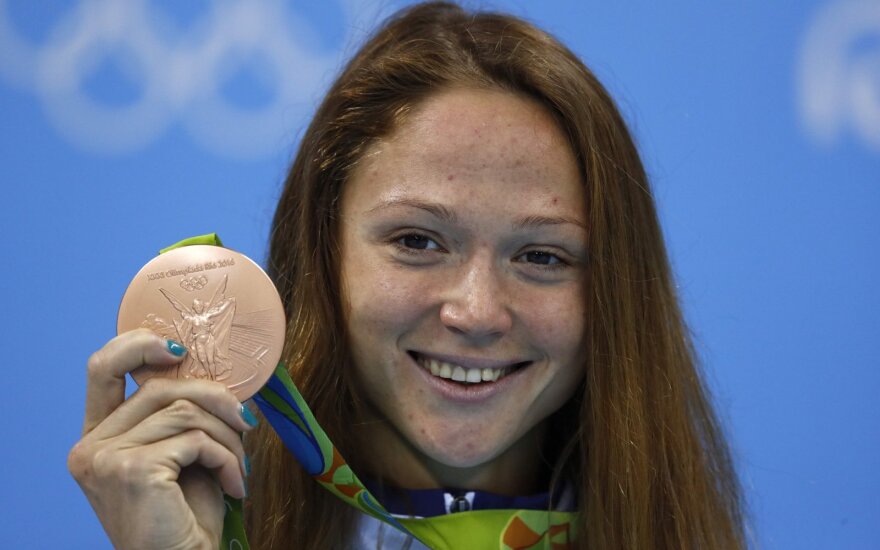 The retired world champion and Olympic silver and bronze medal winner founded the Belarusian Sport Solidarity Foundation in August. The fund's coordinator Alexander Apeikin told BNS Herasimenia arrived in Vilnius last week and has already met with representatives of several sports organizations, as well as the management of the Lithuanian National Olympic Committee.

"Our main task will be to provide financial, psychological, logistical and any other type of help to Belarusian athletes who have suffered at the hands of the regime. We would like to strengthen cooperation with international organizations and sports federations to ensure that the human rights situation in Belarus stays on the European and global agenda," Herasimenia, leading the fund, was quoted as saying in a statement. "My role will be to coordinate all aspects of the fund action, from fundraising to communicating with international organizations."

Apeikin told BNS the sports community is taking an active part in the ongoing protests in Belarus and over 850 retired and active athletes issued an open letter demanding to hold a new election, to end violence and bring those responsible for the events in the country to justice.

"Afterwards they started kicking them out (of organizations – BNS) and putting in jail those who actively participated in peaceful protests. We couldn’t look at this calmly and established the Belarusian Sport Solidarity Foundation," Apeikin said, adding that some 20 athletes have already received assistance.

The fund will also demand liability from the heads of Belarusian sports organizations for backing repressions against athletes.

"The fund's goal is to protect athletes' rights, support those who lost their jobs and cannot fully train but want to act, and, on the other hand, to seek legal liability for Belarus' sports leadership for taking part in the crackdown on athletes," the fund's coordinator said.

"We are grateful to Lithuania for opening the borders and supporting the Belarusian nation. It’s also important for sports as a lot of athletes are taking an active part in protests and then facing problems with law enforcement as they are being put in jail and kicked out. And in Lithuania, we can fairly calmly engage in our activity and openly support Belarusian athletes in cooperation with the International Olympic Committee and other sports organizations," he said.

Herasimenia's husband, who is currently an active member of the national swimming team, Yevgeny Tsurkin, has also faced problems but is still in Belarus.

Lithuania’s Foreign Ministry has decided to recall some of its diplomats from Minsk , although...

Romanian artist who chose Lithuania as his home