aA
With tensions flaring up again in eastern Ukraine after Russian-supported separatists attacked Mariupol, killing 30 civilians, policymakers and observers in Lithuania are particularly touchy when it comes to relations, or lack thereof, with Russia. Their ire can even fall on someone from their own team if he or she is as much as suspected of sympathies for Russia. 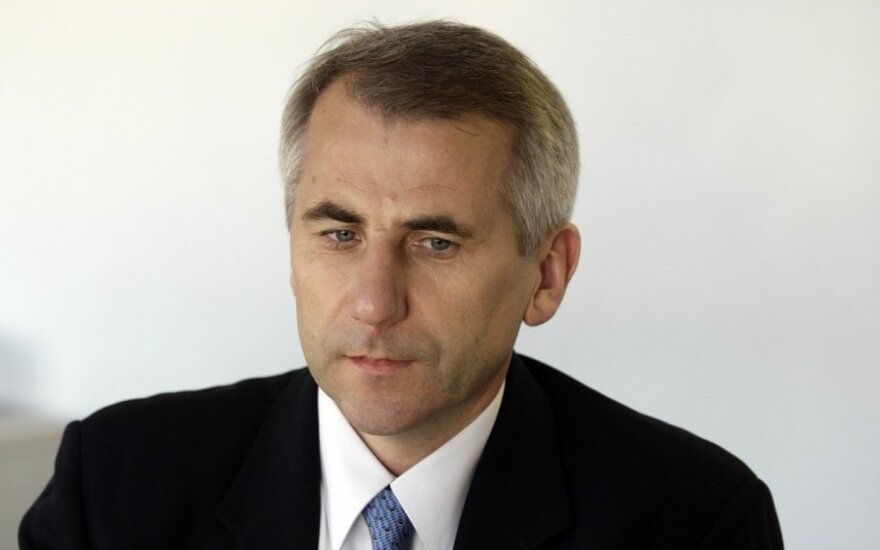 Vygaudas Ušackas is a Lithuanian diplomat, member of the conservative Homeland Union and former foreign minister of the country. He now serves as the European Union's ambassador in Moscow and is therefore responsible for keeping dialogue between Russia and Europe alive in the general atmosphere that has been likened to the Cold War too many times.

Last Sunday, Ušackas took part in an event in Moscow to mark the 260th anniversary of Moscow University. The festivities involved guests from the Russian government, including Sergey Ivanov, chief of staff at President Vladimir Putin's office, and a game of basketball.

Ušackas later posted on his Facebook wall: "Basketball diplomacy in Moscow. Was playing on the team with Ivanov, Novak and others. Wish we understood each other in politics as we did today on the basketball court."

Whether the outrage that ensued is to be termed "ball-gate" or "facebook-gate" remains to be seen, as both Ušackas' choice of occasion to meet Russian officials and his manner of announcing about the encounter came under sharp criticism in Lithuania.

"An official EU representative demonstrates that one can play basketball and behave as if nothing had happened," political observer Laurynas Kasčiūnas commented on the incident to DELFI. "I think the timing is very unsuitable. And I do not believe this could bring any diplomatic use."

"Our EU ambassador in Moscow is playing 'basketball diplomacy' with Putin's administration chief Sergey Ivanov and saying 'that's my job'. I agree with Ušackas, because I believe it is indeed his job to be meeting Russian officials, including the president himself. But the ambassador's diplomacy, when the ambassador himself announces about it, raises some doubts - that it is not diplomacy but Ušackas' personal politics," he wrote in an op-ed piece for DELFI.

By "personal politics" Lopata means rumours that Ušackas has ambitions to one day run for Lithuanian presidency. A fellow member of the Homeland Union, who spoke under the condition of anonymity, told DELFI that he might be considered as the conservative candidate in 2019 election.

"It's no secret that he is considering to return to Lithuania, not as foreign minister but someone higher up. It is a public secret that this is possible," he said.

Ušackas, obviously unprepared for so much ire, responded to criticism by saying he was using all venues available to him to contact Russia's leaders and discuss important issues, including the situation in Ukraine.

"Let me repeat that my job as an ambassadors, as a diplomat, is to express official positions using all available channels: be it formal statements during negotiations or informal occasions, from basketball, football, tennis, golf games to diplomatic receptions," he told LRT radio on Monday.

"This is diplomatic ABC. I am sorry that some politicians, who want to exploit people's understandable emotions over the war in Ukraine, are trying to win some points."

Meanwhile his party, the conservative Homeland Union which has maintained the most consistent Russia-sceptic stance since Lithuania emerged from the ruins of the USSR, has been somewhat reserved in passing judgement on Ušackas activities.

MP Rasa Juknevičienė, former defence minister, commented to DELFI that she did not condone "basketball diplomacy", but understood that serving as EU ambassador in Moscow required flexibility.

"Well, he [Ušackas] is of the opinion that one has to keep in contact under whatever circumstances. I can neither condemn him for that nor applaud. My position is different, but I am not EU representative in Moscow. The post probably forces one into adopting a slightly different stance... I really do not think that Ušackas' take on Russia's actions in Ukraine is any different from ours. I do not agree with some of the 'hotheads' who say Ušackas is leaning towards the other side - it is really not the case."

She added, however, that a diplomat should "find a balance" and "refrain from irritating the public".

It seems, after all, that what drove the critics up the wall most was Ušackas Facebook post with photos of him playing basketball with Putin's chief of staff rather than repeating phrases of outrage.

"Well, for goodness sake, we live in an open world. It's better that people learn from me what I do than from stories on Russian TV and media," Ušackas responded on LRT radio. "In fact, Sunday's event had been very widely discussed. I use social media to show my friends what I do and the wide range of work I engage in." 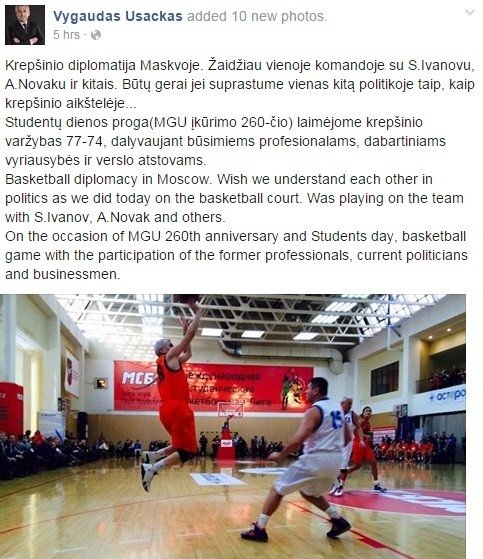 Update 28 January. Lithuania's Foreign Minister Linas Linkevičius also commented on Ušackas Facebook post. Speaking on the Žinių Radijas radio on Wednesday, Linkevičius said it "was definitely in a wrong place and a wrong time", according to BNS.

"The methods are definitely comprehensible in diplomacy, processes do not only take place in rooms of negotiations, however, it was a mistake and I believe that Vygaudas will realize it in the end. He is an experienced politician, not just a diplomat," Linkevičius said.

Lithuanian MEP Petras Auštrevičius has called for stripping Russia of the right to host the 2018...