aA
On 6 November, at a solemn ceremony in Berlin, Lithuanian President Dalia Grybauskaitė accepted the Golden Victoria award given to Lithuania and other Baltic States for the promotion of European ideas. In her speech, the president underlined that this award was the recognition of efforts and determination of all Lithuanian people to build a strong European state, the presidential press service informs. 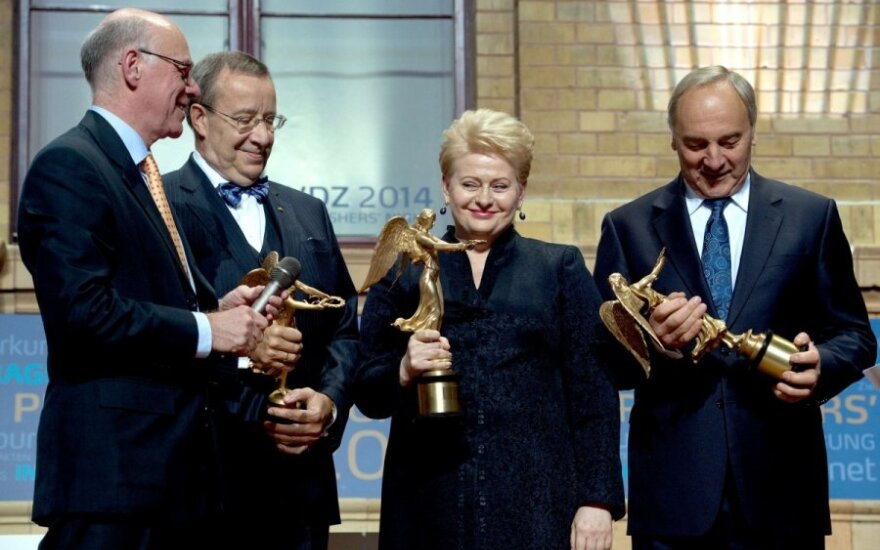 "The people of the Baltic countries have always strongly believed in Europe, never had doubts about the chosen path while understanding perfectly well that it will not be easy. We all knew that freedom is not a given, so we took responsibility for our nations and walked resolutely along the European road. Today, as Europe faces new challenges, it is especially important not to forget the values which encouraged Lithuanians, Latvians and Estonians to come together to form the Baltic Way. The same values tore down the Berlin Wall a quarter of a century ago. Only together, looking for what unites us rather than divides, can we maintain peace in our continent," the president said.

According to the president, this very reputable award signifies the trust the German people have in the Baltic states. Golden Victoria is the acknowledgement of achievements of the Baltic countries over 24 years of independence.

This year, Golden Victoria in the category Promotion of Pro-European Ideas was awarded by representatives of the influential analytical German media to the Baltic states. Lithuania, Latvia and Estonia were acknowledged for the promotion of European ideas, peaceful struggle for freedom, successful handling of the economic crisis, achievements in implementing European reforms, and trust in the future of Europe. The award was given to the Baltic nations on the 25th anniversary of the fall of the Berlin Wall.