BNS
aA
Lithuania's President Dalia Grybauskaitė attended a presentation of the movie Ashes in the Snow at the Capitol Building on Wednesday as part of her visit in the United States. 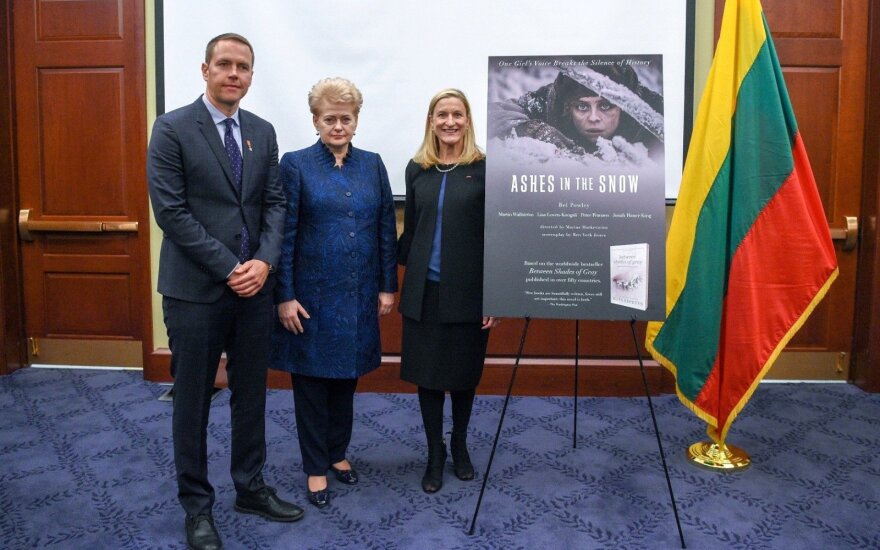 In the president's words, the story about a teenager deported to Siberia will help the world to understand the history and present of Lithuania and other Baltic states.

"The movie that will be shown in the West will mean that we testify our truth about our fate, about how we were destroyed and how we managed to survive, about why we want to defend ourselves today and why freedom is so important to us. This is why we will definitely defend it," Grybauskaitė said after the screening.

"It should have a major impact in the West on the understanding why the Baltic states and Lithuania value their freedom and prepare to defend it," she added.

The movie, which will hit movie theaters in October, has been filmed by a novel Between Shades of Gray by US-born Lithuanian author Rūta Šepetys, which tells about a teenager fighting for survival and humanity in a labor camp above the arctic circle.

At the screening, Grybauskaitė met with Šepetys, who is the executive producer of the movie, and director Marius A. Markevičius. The screening was attended John Shimkus, the head of the Baltic Caucus at the US House of Representatives, and members of the diplomatic corps.

Between Shades of Gray has been translated into 27 languages, becoming a The New York Times bestseller in the United States and included into the list of mandatory reading in schools.

Ruta Sepetys, a US writer of Lithuanian decent, was presented on Monday with the Carnegie Medal, a...

Rūta Šepetys , the critically acclaimed Lithuanian-American author of Between Shades of Gray ,...

You are surrounded by a blizzard and a never-ending snowscape as far as the eye can see. All you can...

Lithuania, Latvia and Estonia are finalizing a governmental agreement in connection to higher...