BNS EN
aA
Vytautas Landsbergis, Lithuania's first post-independence leader, and former President Valdas Adamkus were presented with the Freedom Prizes on Friday as the country marks the 26th anniversary of a bloody 1991 Soviet crackdown on its independence drive. 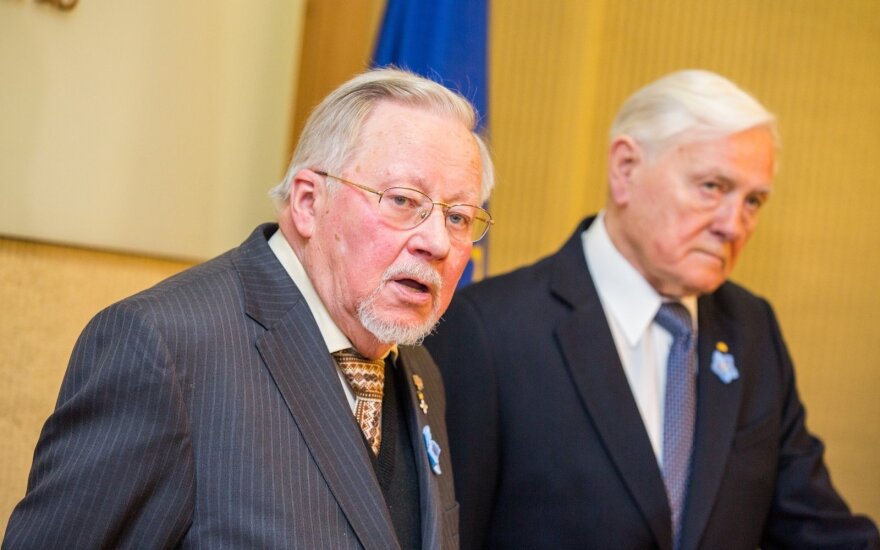 "Vytautas Landsbergis and Valdas Adamkus are the state's architects and builders, the symbols and guarantors of its statehood who substantially contributed not only to the freedom of Lithuania, but also to its security, and who led us into NATO and the European Union," Radvilė Morkūnaitė-Mikulenienė, chairwoman of the Freedom Prize Commission, said during the award ceremony.

The Freedom Prize was established by the Seimas in 2011 to honor individuals and organizations for their role in defending freedom, democracy and human rights and promoting international cooperation for the cause of self-determination and sovereignty of Eastern and Central European nations.

This year marked the first time that two prizes were awarded.

The first Freedom Prize in 2011 was awarded to Sergei Kovalev, a Russian fighter for freedom and democracy and defender of human rights. The 2012 prize was presented to Antanas Terleckas, a political prisoner and founder of the political organization Lithuanian Freedom League.

The 2013 prize was given to Archbishop Sigitas Tamkevicius, the founder and editor of the underground Chronicle of the Catholic Church in Lithuania. The 2014 prize went to Adam Michnik, a Polish dissident and editor-in-chief of the daily Gazeta Wyborcza.

The Freedom Prize, which amounts to 5,000 euros, is awarded every year on January 13, the Day of the Defenders of Freedom.

Fourteen civilians were killed and hundreds more were wounded when Soviet troops stormed the TV Tower and the Radio and Television Committee building in Vilnius on that day 26 years ago.

Adamkus and Landsbergis reflect on the Obama presidency (1)

No difference between Landsbergis’ nationalism and Putin’s, claims Andriukaitis