BNS
aA
Lithuania's law-enforcement have closed a 589-day investigation into political corruption allegations of one of the country's largest business concerns MG Baltic, the Liberal Movement and the Labour Party. 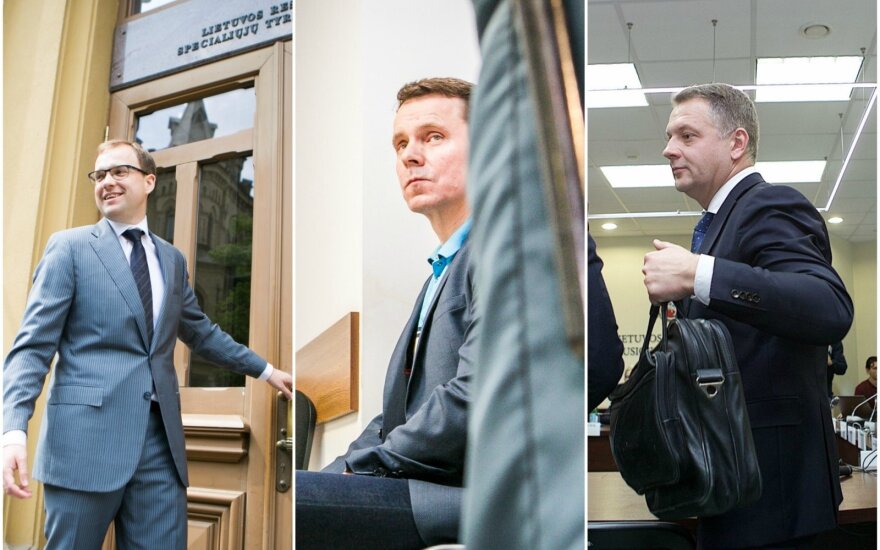 In the framework of the investigation, prosecutors interrogated more than 150 persons, including about 50 former or existing parliamentarians, ex-ministers and MEPs.

The probe involved more than 30 searches, checks of around 50 electronic devices and media, as well as around 50 specialist conclusions.

BNS is listing the main facts of the case.

Eligijus Masiulis: The former leader of the Liberal Movement and former parliamentarian is suspected of taking a bribe of over 100,000 euros from MG Baltic vice-president Raimondas Kurlianskis for the political party's operations in the concern's interest. He is suspected of taking a bribe for influence in the selection of a location in Vilnius for a monument to Jonas Basanavičius, parliamentary discussions of amendments of the Consumer Loan Law and a resolution on the Vilnius-Utena highway. All in all, searches of the former politician's home, office and car revealed around 250,000 euros. Masiulis faces suspicions of bribery, influence peddling and unlawful enrichment. He admits having taken money from Kurlianskis, however, claims it was a loan.

Šarūnas Gustainis: The ex-Liberal and former member of the Vilnius City Council is suspected of taking a bribe of nearly 9,000 euros for parliamentary decisions in MG Baltic benefit. The bribe was disguised as support to the public establishment Institute of Applied Politics. Prosecutors say that Gustainis, in response to Kurlianskis' request, registered amendments to the Consumer Loan Law in parliament and voted in support of their adoption. He is suspected of bribery. Gustainis has dismissed the suspicions as funny, pledging to definitely defend himself in court.

Gintaras Steponavičius: The former member of the Liberal Movement and MP is suspected of discussing unlawful funding of the Liberal Movement with MG Baltic vice-president, Kurlianskis, via a support fund bearing his name and the Freedom Studies Centre he had established. The authorities say Steponavičius finalized an agreement on support to the organizations and consequently voted in support to legal acts in favour of the concern. The law-enforcement has not specified any bills or sums. Steponavičius is suspected of abuse. The MP has admitted having discussed support to the two organizations, however, maintains he committed no crime, as he did not vote in support of decisions in the concern's interest.

Vytautas Gapšys: The law-enforcement suspect Kurlianskis paid the then MP, formerly a member of the Labour Party, around 27,000 euros to influence other members of the party to act in the interest of MG Baltic. Prosecutors say part of the bribe was disguised as discounts for the Labour Party's political advertisement broadcast on the television channel owned by the concern, while the other part of the sum was disguised as support to a public establishment. Gapšys is suspected of having acted for in the concern's interests during the parliamentary ballot on the amendments to the Profit Tax Law and the Consumer Loan Law, as well as on the Vilnius-Utena highway project.

Prosecutors suspect the former MP may have also influenced then Agriculture Minister Virginija Baltraitienė to act in the interest of MG Baltic, attempted to influence a decision on the future of Stasys Dailydka in the post of the state-run railway company Lietuvos Geležinkeliai, as well as influence the results of the public procurement tenders announced by the Ignalina Nuclear Power Plant. Gapšys faces suspicions of bribery and influence peddling. The ex-MP denies having taken a bribe, saying he did not vote in support of the bills in favour of the concern and claiming to have secured discounts for the Labour Party's advertisement campaign by way of negotiations.

Raimondas Kurlianskis: The vice-president of MG Baltic is suspected of bribing Masiulis, Steponavičius, Gapšys, as well as influence peddling. Kurlianskis has said he disagreed with the suspicions but has refrained from further comments. Earlier this week, he announced plans to sell his stake in a company operated by the concern and resign from all positions in MG Baltic after the deal has been finalized.

MG Baltic representatives have dismissed the suspicions against the concern as the prosecutor's abuse of his power and psychological pressure. The two parties disagree with the suspicions, saying that individual persons in charge of certain actions should be held liable, while the organization that had not authorized them should be exempt.