Ludo Segers ⎮ the Lithuania Tribune
aA
On 26 Augustus 1991 the then Minister of Foreign Affairs, Algirdas Saudargas signed a document establishing diplomatic relations between a free Lithuania and Iceland. Soon thereafter, a number of countries followed and on 17 September, the UN General Assembly admitted Lithuania as a member. 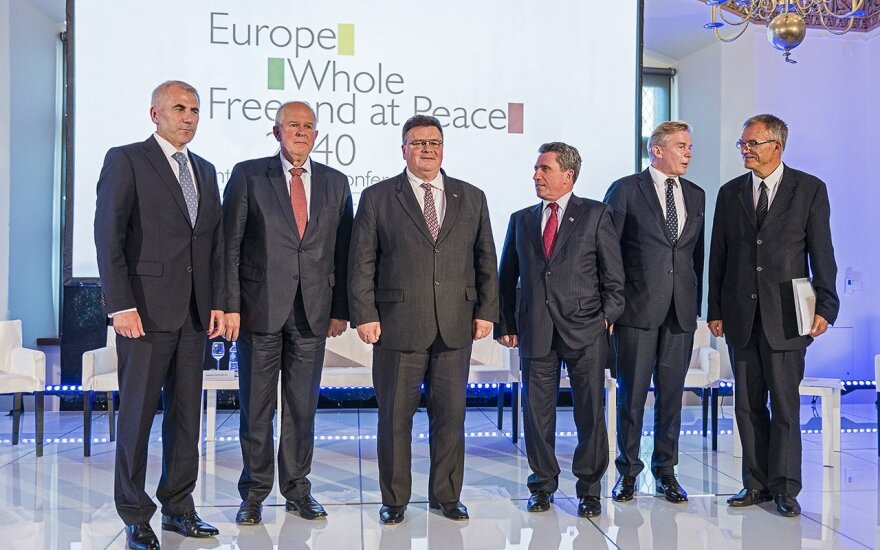 This was cause of a celebration on Thursday, 15 September in Vilnius with a major conference 'Europe Whole Free and at Peace 2040' in the Palace of the Grand Dukes of Lithuania.

President Grybauskaitė reminded the audience of challenges ahead but that it was better to face these with 'Friends who always have been with Lithuania and supported us to reach our goal'. Foreign Minister Linas Linkevičius remarked that Europe is still not whole and free and ending his remarks with: ''it is all about our values and keeping a believe in freedom''.

The Director-General of the United Nations Office in Geneva, Mr. Michael Moeller brought greetings from the Secretary General also reminded of the many challenges ahead and that large numbers of dissatisfied citizens indicate that it can no longer be business as usual.

Professor Vytautas Landsbergis, the first head of State of an independent Lithuania used his poetic words to remind the audience that Europe at peace is still a mere illusion, still uncompleted and not free. He saw the lies being used as revenge (by Russia) as a dangerous weapon of mass destruction.

In a number of sessions, speakers balanced these challenges with doses of pessimism and optimism. NATO and EU membership that followed a good decade after the diplomatic recognition have contributed to Lithuania being more secure and certainly more prosperous.

In an exchange between former President Adamkus and Polish President Kwasniewski, many of the areas of progress during their presidency were highlighted. However, President Adamkus lamented his disappointment with social and educational issues as well as reform of the legal system.

The topic of the irreversibility of an interconnected society and globalisation all brought on by technological progress came often in the debate, particularly in it challenging the social fabric and voiced by populists linking it to the future of the EU. Brexit, populism, migration issues were singled out by many of the speaker as they all threaten the unity of Europe's peace and prosperity.
The unity to face Russian aggression over the illegal annexation of Crimea, the frozen conflicts in Ukraine, Georgia and Moldova are constant reminders that Russia still has a different vision of a Europe at peace.

Closer to home the Astravyets Nuclear Power Plant build with inferior Russian materials in Belarus was addressed by a panel that brought six former Foreign Ministers together debating that and other challenges Lithuania faces. They, also, saw the Brexit negotiation and the ongoing migration debate as dominating the EU agenda in the immediate future. Solidarity and unity were seen as most needed, as there are constant threats to democracy, rule of law and peace.

Rightfully, one of the Foreign Ministers pointed out that this was a high quality exchange of minds of a level rarely seen. Excellent suggestions were made, including Lithuania keeps up a hunt for talent and investment that will needed to keep on transforming the country over the next 25 years.