BNS
aA
Thirteen of 19 members of the Lithuanian Social Democratic Party's (LSDP) political group in the Seimas supported with their signatures a coalition with the group of the ruling Farmers and Greens Union (LFGU), but those who did not back the deal do not plan to leave the LSDP block in the parliament. 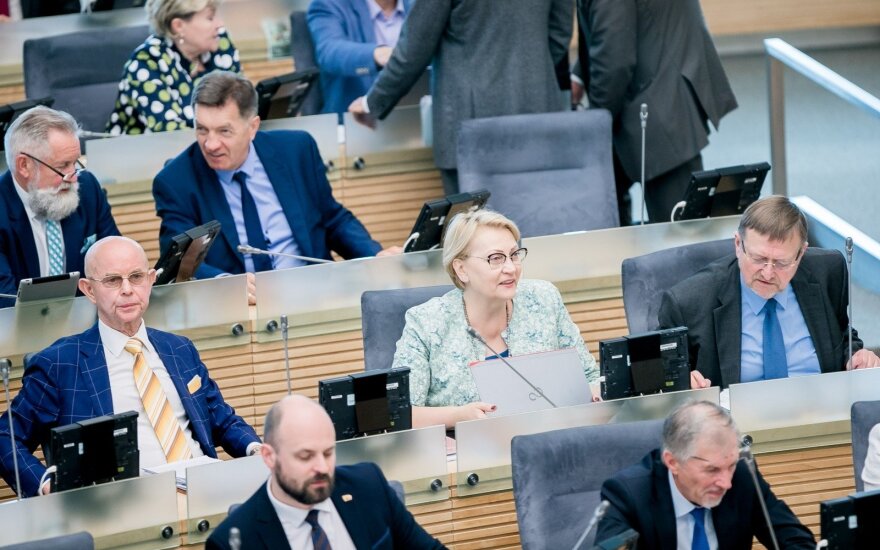 Viktoras Pranckietis, the speaker of the Seimas (parliament), on Tuesday announced a coalition declaration that was signed by the two political groups on Sunday, saying that this means that the ruling majority has 76 seats in the parliament.

Whether or not the ruling coalition has the minimum majority of 71 votes in the 141-member parliament depends on how many Social Democrats support the coalition.

"I believe there are 14 of us, including the Labor Party members," she said.

"I won't sign. I am in the opposition," the lawmaker told BNS.

The LFGU has 56 votes plus the vote of Pranckietis, who is formally not a member of the party's group in the Seimas.

On the other hand, even though some Social Democrats do not support the coalition deal with the LFGU, they do not plan to pull out of the LSDP block.

The LSDP council voted last Saturday to withdraw from the government coalition with the LFGU.

Some SocDem ministerial officials resign, others stay on

In the wake of the Lithuanian Social Democratic Party (LSDP) Council's decision to withdraw from the...

Prime Minister Saulius Skvernelis said on Monday that he was considering joining the Lithuanian...

PM sees no reason for economy minister to step down

Lithuanian Prime Minister Saulius Skvernelis said on Monday that he saw no reason for Social...

The Lithuanian Social Democratic Party's (LSDP) ethics commission and its presidium will discuss the...

Lithuania's Parliamentary Speaker Viktoras Pranckietis has described as a rational step the decision...

The coalition agreement between political groups of the Lithuanian Farmers and Greens Union and the...