DELFI EN
aA
The first day of “Comic Con Baltics 2019” brought together thousands of popular culture fans under the roof of “Litexpo”. During the event, visitors met world-wide known Hollywood actors and creators of web- comics, had a chance to watch the qualification of the first drone racing FAI World Cup in Lithuania, writes organizers of the event.
Sekite svarbiausias naujienas socialiniuose tinkluose! 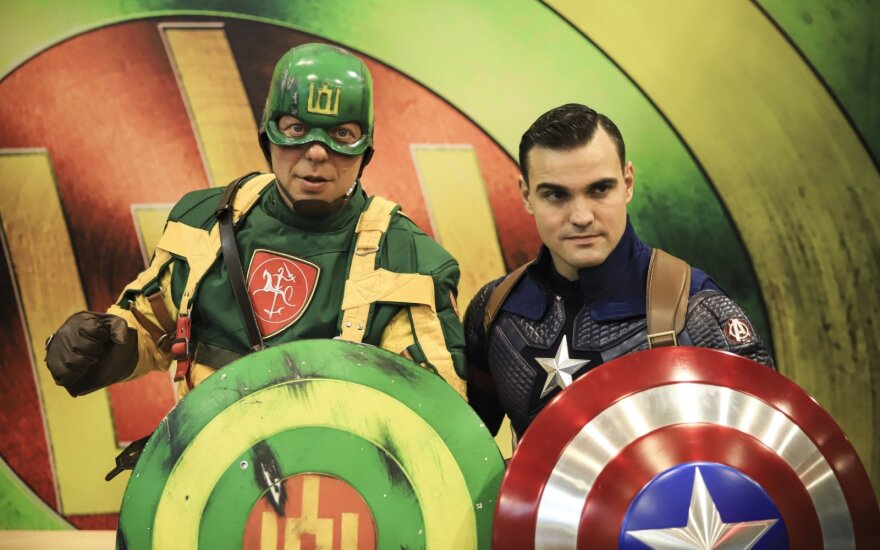 Also, to vote in the cosplay contest, and try out many more pop culture-related types of entertainment. However, one of the most significant parts of the event was the meeting of superheroes – Captain Lithuania and Captain America.

For the third year in a row the Ministry of National Defense of the Republic of Lithuania and the Lithuanian Armed Forces has been a part of Comic Con Baltics. However, this year has become an exceptional one - in 2019 we celebrate the 15th anniversary of Lithuania's membership of the North Atlantic Treaty Organization (NATO) and the 70th anniversary of the organization itself.

Related articles
Star of “Vikings” before her visit to Vilnius: I did not know where to start
Confirmed: Baltics fans will be able to meet “Married… With Children” star David Faustino

“Every year we invite heroes to meet at the “Litexpo” Exhibition Center. With this slogan we are talking not only about the popular culture, but also about the heroes that work among us. For this reason, we are very happy that this symbolic meeting between Captain Lithuania and Captain America, and the one between our National Defense and NATO allies took place during “Comic Con Baltics 2019”,” says Tomas Vievesis, the organizer of the event.

Visitors were welcome to visit the stands of the Lithuanian Defense Forces not only for various educational and recreational activities, but also for the opportunity to interact with our country's allies - soldiers of the NATO Forces from Belgium, the Netherlands and Germany.

“On the first day of the event there were a lot of different NATO entertainments in the stands of the Ministry of Defense of the Republic of Lithuania and Lithuanian Armed Forces, one of them was educational quizzes “15 Years with Heroes”. We can be pleased with the involvement of the participants and their knowledge,” says Tomas Vievesis.
According to the organizer, entertainment and educational activities related to NATO membership will also be available on Sunday at the “Litexpo”.

Those interested in weapons and military equipment will have a chance to look at the weapons and equipment on display at the event on Sunday. Also, visitors will be able to meet, chat and take a picture with Gabrielius Liaudanskas-Svaras on a special Captain Lithuania stand.
On Sunday visitors will also be able to meet world-wide famous actors and creators from famous movies and TV series, hear about the ongoing new Lithuanian movie projects, test video games, learn about the technology news, hear about new comics, see cosplay shows, enjoy family space and experience much more other types of entertainment.