(1)
Alex Tigani | The Lithuania Tribune
aA
Ričardas Berankis was unable to match South African Kevin Anderson in today’s Australian Open, bowing out of his second round affair in straight sets 6-2 6-2 7(7)-6(3). 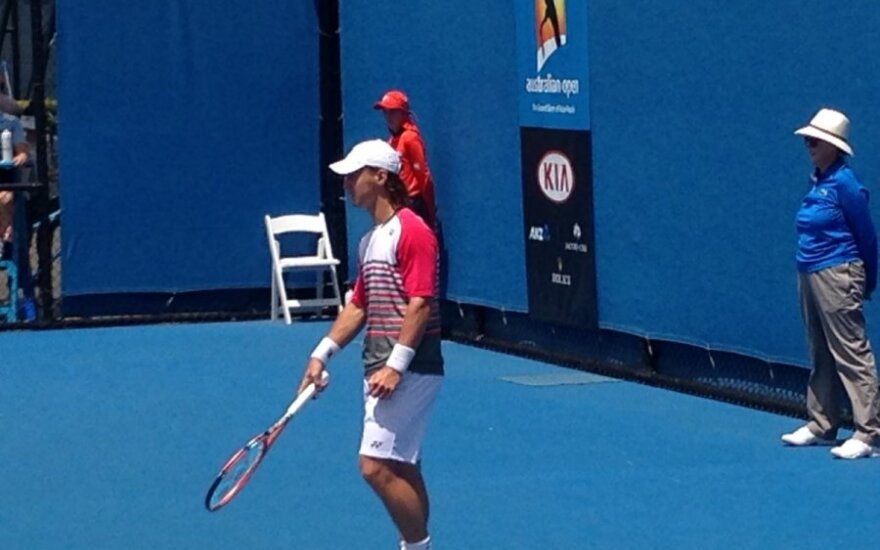 The 24-year-old couldn’t help but smile upon entering court 13 of Melbourne Park as he was greeted by his loyal Australian-Lithuanian fans from Melbourne, Geelong and Ballarat.

Yet by the time the Lithuanian’s sixth Australian Open had come to an end he would depart from the premises immediately, meeting with German coach Dirk Hordoff for a post-match briefing.

However that’s not to say that Berankis did not contribute throughout the affair’s highlights package.

The Lithuanian Davis Cup star surprisingly matched Anderson in the respective second game’s of the opening two sets thanks to precision on his return serve.

This trait was then followed by Berankis’ flare on his volley shots in the third set, a massive improvement compared to his previous match, against one of the world’s fastest servers.

Such was the significance of these displays that the final set resulted in a tie break however a double fault differential of 1:6 would ultimately fall in Anderson’s favour.

Overall, Berankis was able to claim 12 games across the three sets.

If successful he is then expected to play Spaniard Rafael Nadal, a previous Australian Open champion (2009) and duel runner up (2012, 2014)…. I hear Rafa does well at Roland Garros as well!

Meanwhile, Berankis’ supporters are urged to watch on for Lithuania’s 2015 Davis Cup opponents from Poland such as Jerzy Janowicz who plays Gael Monfils (France) Thursday.

Calling on the Berankis Brigade

This is a call to all Australian-Lithuanians who wish to join the Berankis Brigade!