the Lithuania Tribune
aA
Domantas Sabonis may be headed to the legendary Boston Celtics after declaring for the NBA draft according to a draft projection by leading American sports news website, Bleacher Report. 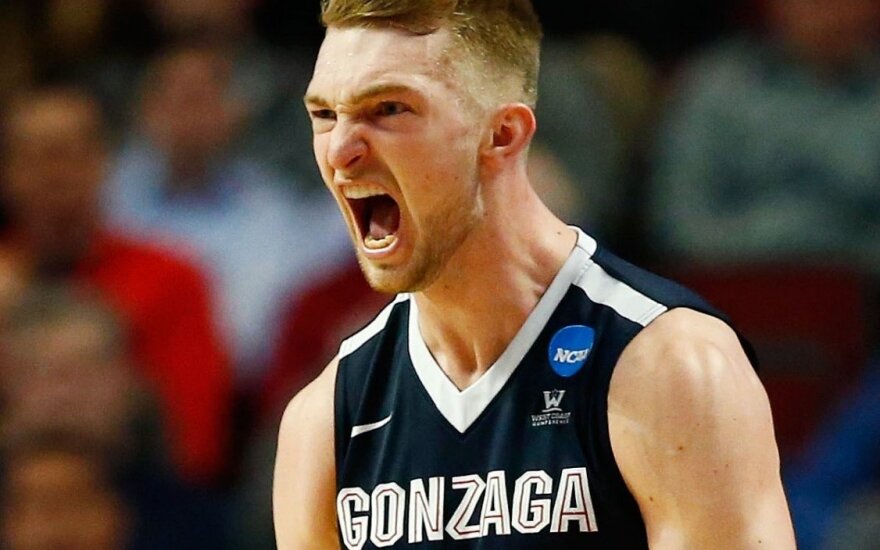 Tipped as one of the biggest movers in the draft after the NCAA tournament, Bleacher Report said the son of Lithuanian NBA legend Aryvdas Sabonis “isn't what the NBA looks for these days in its big men, as in he isn't a guy who will stretch the floor with his shot. Which is fine. A team like the Boston Celtics won't complain that a more traditional guy like Sabonis takes a dip.

“Adding him means reinforcing a core underneath the basket featuring Amir Johnson, Jared Sullinger and others. For a team with a stockpile of draft picks and already a contender in the Eastern Conference, it's nothing short of a major win,” said Bleacher Report.

“At 6'11" and 240 pounds, Sabonis is one of the draft's better enforcers. This wasn't anything new heading into the Big Dance, but it sure doesn't hurt that he scored 21, 19 and 19 points while tallying eight blocks over the three contests.”

The son of Lithuanian NBA legend Aryvdas Sabonis, the sophomore declared for the NBA draft at the end of last week and may be a perfect match for the Celtics. He is currently Gonzaga’s all-time leader in career field goal percentage at .632.

However, CBS Sports’ Gary Parrish has Sabonis going to the Toronto Raptors, No. 26 overall in the draft, to join fellow Lithuanian and NBA star Jonas Valunciunas.

Despite playing only two seasons, he scored 1,002 points to become the 41st player in Gonzaga’s history to score 1,000 points, and posted 694 rebounds.

Bleacher Report have Sabonis Jr being selected at No.28 in the draft but other mock drafts have put him much higher, in the mid-teens.

"This has been a very difficult decision for me because of the amazing two years I have had at Gonzaga," Sabonis said in a statement. "I want to thank the coaching staff, my teammates, and all of our great fans for making this such an incredible experience for me."

"[Domantas] is as impressive of a person and player as I've ever coached," Gonzaga coach Mark Few told ESPN, "he has an insatiable desire to get better".

Now nicknamed the “Lithuanian nightmare” for his demolition of opposing teams, Domantas Sabonis is...

Domantas Sabonis led US college Gonzaga to a stunning 68-52 victory over Seton Hall with a...