Alex Tigani | The Lithuania Tribune
aA
Lithuania’s national rugby team has commenced its European Nations Cup tournament in style thanks to a dominant 34:15 win in Andorra before a small crowd of 500. 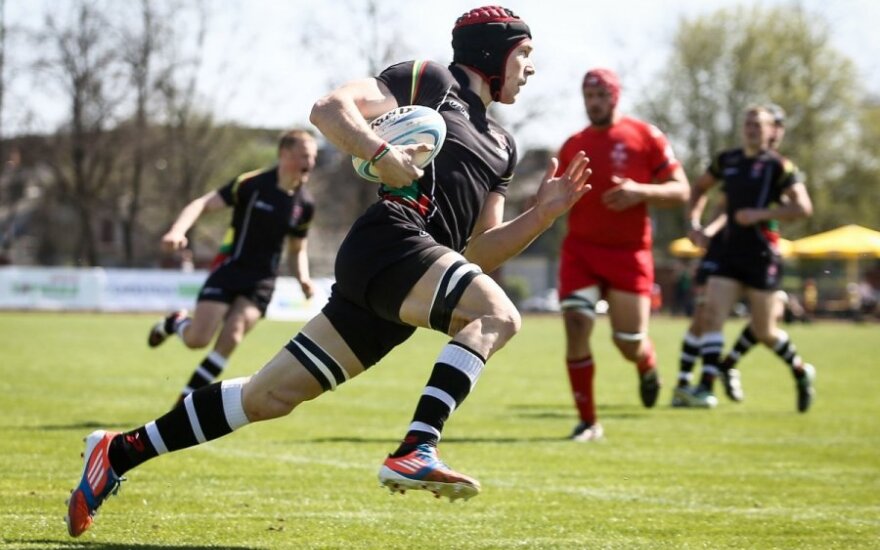 Marc Abello enabled the host nation an early 3-point lead after capitalising on an early penalty at the 19th minute.

Thankfully the Baltic nation launched itself back into the game to capture a dominating 20:8 score line at the main break thanks to back to back efforts by Vytaras Bloškys.

Such was the flow of the Lithuania’s new game plan that they would score 22-points consecutive points before Joan Fité landed his second try for the host nation at the 67th minute.

However Bloškys stood superior as the 23-year-old captured his third try minutes later; bringing the Šiauliai BaltRex star to a game high 15-point tally to single handedly match his opposition.

Tomas Zibolis also contributed to the score sheet however the Lithuanian veteran would be out done by Dovydas Taujanskas; who scored 9-points, including a penalty goal, to add to an already impressive 2014 highlights package.

Arguably the most impressive aspect of this result for Lithuania was the fact that these were the two highest ranked nations in the 2014–16 European Nations Cup 2B tournament.

Lithuania will return to home and play off against Hungary this Saturday in Šiauliai, the undisputed capital city of Lithuanian Rugby.

Cyprus, who surpassed Lithuania’s world record of 18 consecutive wins last year, will then play host to Andorra while that same day Latvia will play Hungary in their first tournament game.

Meanwhile, Australia was unable to end its 9 game losing streak in the Bledisloe Cup against reigning world champions New Zealand in Brisbane.

The All Blacks trailed the host nation for a majority of the night before a final two tries in the dying stages enabled the New Zealanders a 29:28 win and a 12th consecutive trophy before a large 45,186 devastated crowd.

Ewen McKenzie has since resigned as coach of the Wallabies (Australia), less than 12 months before the Rugby World Cup is to be held in England.

On this day in sport: 17 October

On this day in sport Stasys Šaparnis added to Lithuania’s Olympic glory under Soviet occupation.

On this day in sport: 16 October

This week has been an eventful for the Lithuanian national football team, a force which has been no...