Rory Kelleher, the Lithuania Tribune
aA
Lithuania’s Jonas Valančiūnas led the scoring for the Toronto Raptors on Saturday but couldn’t prevent a loss to the Indiana Pacers as Donatas Motiejūnas failed to fire for Houston as the Rockets were blown out by Golden State. 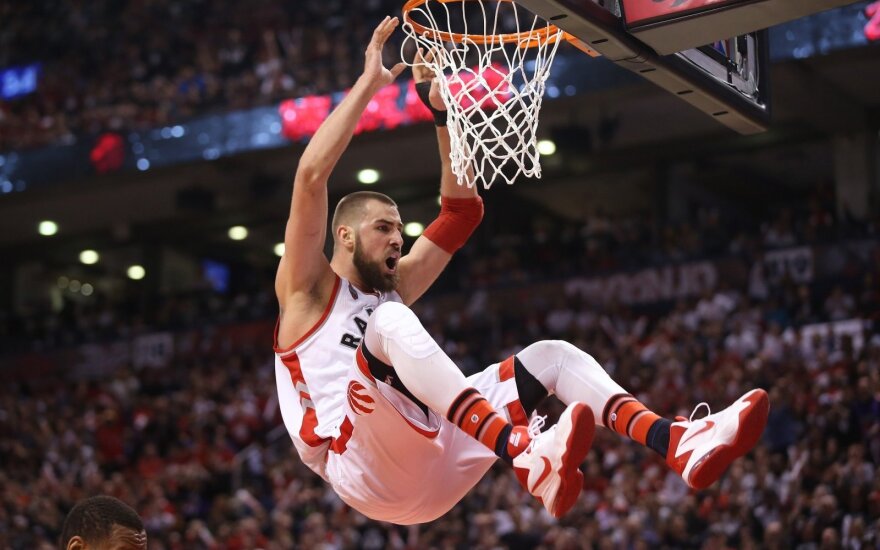 Valunčiūnas physicality in the paint led to a confrontation with Indiana star Paul George but his 16 points, six rebounds and a block were not enough as Toronto’s go-to shooters DeMar DeRozan and Kyle Lowry failed to fire. The Raptors went down 100-83.

For Houston, Donatas Motiejūnas had a quiet game with 8 points, two assists and four rebounds, far from his dominant defensive display for the Rockets in their last outing.

The loss of Stephen Curry to injury seemed to spur NBA champion Warriors on – when Curry exited with a knee injury the game was tied but Golden State embarked on a 41-point run that blew out Houston in the third quarter to give them a 3-1 series lead.

The Warriors hit a NBA playoff record 21 three-pointers in the game to sink Houston.

Meanwhile, there was no love lost between the Raptors and Pacers after a confrontation between the teams erupted in the final quarter when Valančiūnas, DeMarre Carroll and George had to be separated.

The Pacer’s forward Paul George not pleased with Valančiūnas’ physical play. He described one play to ESPN.com where he and Valančiūnas jostled in the paint as Ian Mahinmi attempted a free throw in the fourth quarter and Valančiūnas appeared to strike George on or near the throat before pushing him

“All night, Jonas was throwing his elbows and flinging his elbows and trying to lock arms, and it was almost the play before where he did the same thing and I let it slide and Ian shot a free throw. I crashed in and tried to get the rebound, and next thing you know, his hands once again are coming up toward my throat. I didn't like that,” he told ESPN.

Valančiūnas said: "I wasn't trying to hit him. It just happened," claiming any contact was unintentional.

The Raptors Carroll also got involved after things kicked off between Valančiūnas and George. "That's my big guy. I was just trying to protect him. Jonas, he don't know no better. He plays physical, he plays hard and it's the playoffs. I guess [George] tried to run up on Jonas, but, we don't need none of that."

Valančiūnas rebounding and generally physical play on the boards has the been the key to Toronto’s victories over Indiana averaging 15 points, 13.5 rebounds and 1.3 blocks, but Saturday was the first time the Pacers outrebounded the Raptors in the series, which is now tied at 2-2.

The Raptors meet Indiana again in Game 5 in Toronto on Tuesday while Houston take on Golden State in Oakland on Wednesday. 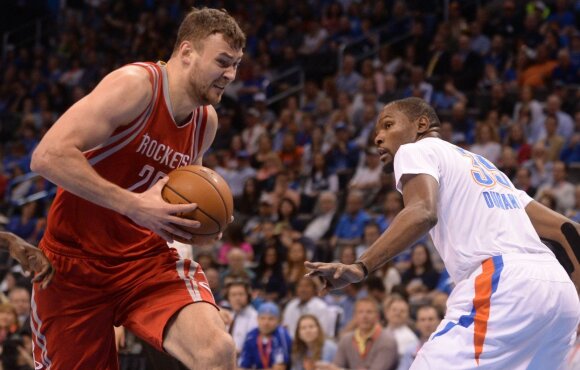 Jonas Valunčiūnas helped the Toronto Raptors pound the Pacers into submission in Toronto on Thursday...

In a strong game for Lithuanian basketballer Jonas Valančiūnas , the Toronto Raptors have broken...

Lithuanian NBA star Donatas Motiejūnas helped the Houston Rockets to make it into this year’s...