On this day in sport: 8 December 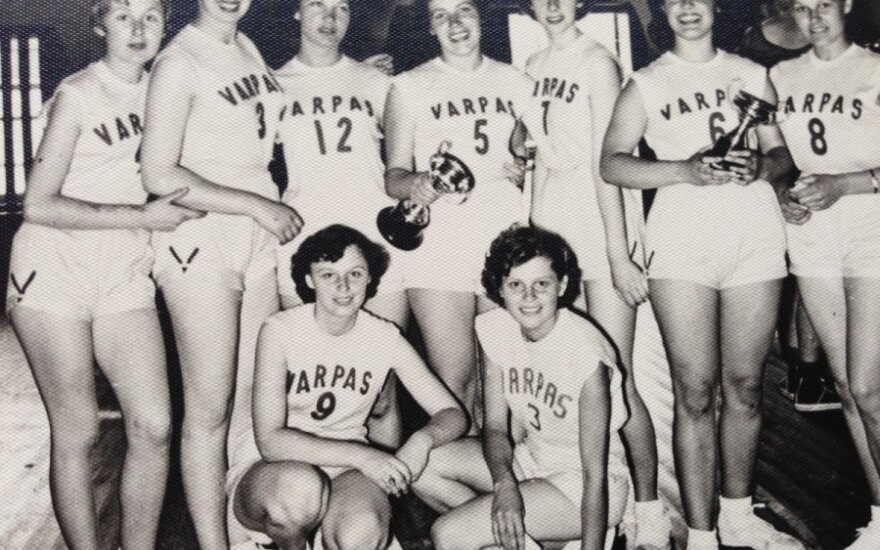 Firstly, we must find a competitive sporting event which featured Lithuanian athletes roughly a fortnight prior to Christmas.

This can be a difficult assignment on Lithuanian soil when you consider the fact that the Baltic nation is usually frosty this time of the season with tracks & fields covered in mist.

International competitions usually take place in the summer months while indoor sports such as basketball and swimming have returned to domestic level at this stage of the year.

Secondly, it would be ideal to conclude these historical flashbacks close to my home (Geelong, Australia) as it would allow me to reflect on the venues which I reflect on with sentiment.

It’s also important to note that I commenced my journey with this publication two years ago with the intent to inject some positivity into our Lithuanian sporting fraternity down under (one which has been divided in recent years).

Therefore it is fitting that we look back on the Lithuanian athletes who marched around the MCG (Melbourne Cricket Ground) with Olympic medals, on this day in sport.

In what would be the second Olympic tournament where Baltic athletes were forced to compete for the USSR (under Soviet Occupation); five Lithuanian men would go on to reach the esteemed podiums of their three respective sports.

You may even patriotically state that the Lithuanians’ 100% winning medal rate sparked the USSR’s march to the top of the medal table claiming a total of 98 (21% of the overall medals).

Arguably Lithuania’s most prominent athlete outside of the basketball court in the 1950s was all-round talent Antanas Mikėnas.

Mikėnas was the only Lithuanian listed in what would be the inaugural Olympic 20km walk race with local form guides predicting the 32-year-old to finish in the top ten.

After commencing the race in the suburb of West Brunswick, the Butkiškiai born superstar went on to reach the finish line at the MCG and claim the event’s inaugural Silver medal.

Two days later another Lithuanian name would exceed the expectations of the local press.

Romualdas Murauskas may not have been a household name in the world’s boxing community nevertheless he secured a Bronze medal in the Men’s Light-Heavyweight tournament.

After automatically qualifying to the Quarter-Final round the 22-year-old proved too strong for Australian Tony Madigan.

Though he was unable to reach the deciding final in Melbourne Murauskas would go on to record six Lithuanian Boxing titles before retiring in 1961 with a 189-16 win loss record.

1952 Olympic Silver medal winning pair Kazimieras Petkevičius and Stasys Stonkus welcomed 24-year-old Algirdas Lauritėnas to the tournament in 1956 and what a journey it would be! 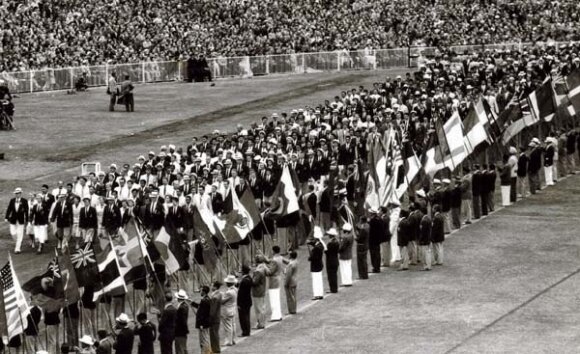 On this day in sport a new Olympic tradition commenced in Melbourne. Photo courtesy of the MCG archives.

Interestingly, Lithuanians had already made a name for themselves in Australia’s basketball community; not only through the establishment of its annual sporting festival but also through the appointment of Leonas Baltrūnas as Australia’s Head Coach two years earlier.

The Baltic contingent helped guide the USSR to early wins over Canada (97:59) and Singapore (91:42) however the side would face defeat to France in arguably the upset of the opening week.

Success would follow in the Quarter-final round with wins over eventual World Champions Brazil (87:68) and Bulgaria (66:56) however the USSR could not hold off the almighty USA.

As expected the two large nations would again face off for the Gold medal following the Soviet team’s redemption claiming win over France (56:49).

It is important to note that basketball was not a mainstream sport in Australia at the time of these games therefore the final took place inside the Royal Exhibition Building to accommodate the event’s large viewing demand.

And though the Americans would continue to remain undefeated in the Olympic Games until 1972, recording a healthy 89:55 victory, both Petkevičius and Stonkus would become the first Lithuanians in history to claim back to back Olympic medals.

Cold War historians may highlight the violent water polo match between the USSR and Hungary (who were engaged in armed conflict at the time) as the Melbourne Olympics’ most famous moment. 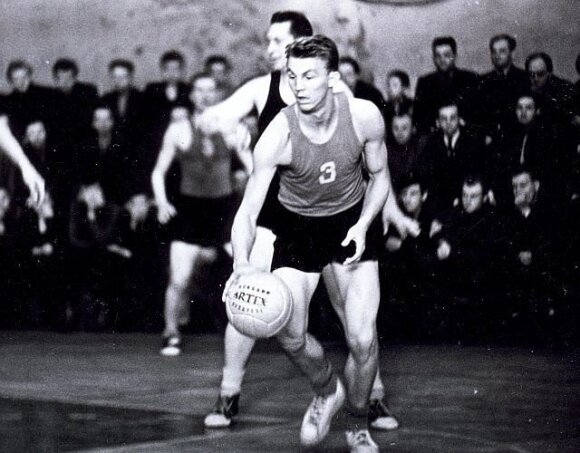 Three Latvians also featured in the USSR team as Valdis Muižnieks is pictured in action. basket.lv

On this day in sport, these five Lithuanians across three different sports were among the 3,314 International athletes who marched together during the closing ceremony.

Instead of marching as teams directly behind their national flags, the athletes mingled with one another as they paraded into and around the arena for a final appearance before the spectators.

This was my favourite story from the Melbourne Olympics as nations pulled down their political curtains to unite as one and enjoy a lap of the MCG.

I’m also proud to state that my grandmother, Danutė Lazutkaitė (Lynikienė), was amongst the thousands cheering on the athletes from the grandstands of Australia’s sporting coliseum.

On this day in sport: 28 November

When looking for a sporting tournament in history filled with political tension yet leveled by its...

As Lithuanian football fans continue to recover from their nation’s 4:0 deficit on Saturday some may...