Alex Tigani | The Lithuania Tribune
aA
As the Chief Sports Writer for Tėviškės Aidai (Australian/Lithuanian newspaper) from September, 2009 until November, 2013, I was blessed to cover a range of Lithuania’s triumphs. 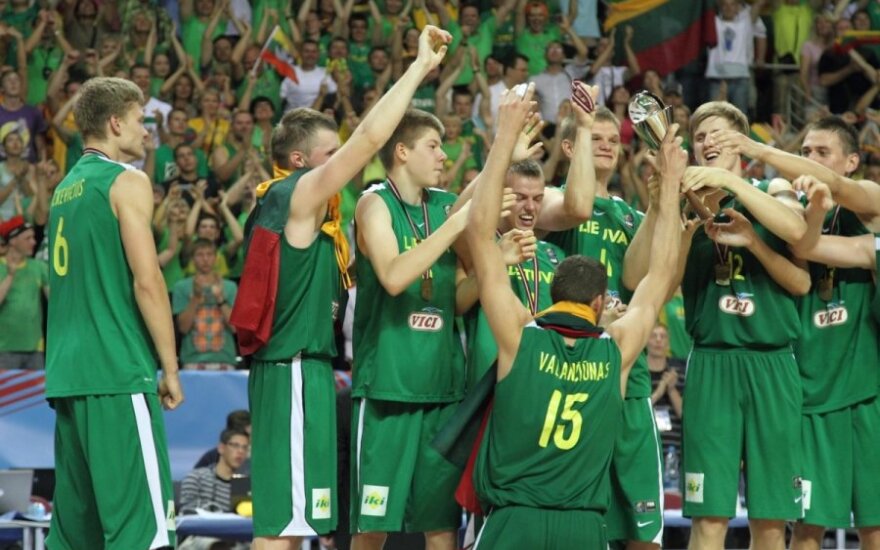 Understandably, the print-only publication may have only had a three figure readership.

Nevertheless, those who did have access rode the bumps as we gasped at an eventful Summer Olympic tournament, shared the hype over a EuroBasket on home soil, brought light to the sport of Rugby and discovered athletes of all abilities during a Universiade.

However if ever there was an event which showcased the unity of Lithuanians in the world of sport during this time, then look no further than the 2011 FIBA U19 World Championships.

Thousands of Lithuanians travelled to Riga on this day in basketball, supporting a team of juniors destined for greatness…..

Here is the story I composed on this day in 2011 for the Australian/Lithuanian community:

Riga recently hosted the FIBA Under-19 World Championship final and, as a result of thousands of supporters making their way across the border to the Latvian capital, Lithuania was able to claim the gold with ease over Serbia.

After loosing their first match to Croatia, Lithuania bounced back into podium contention with a 117:64 win against South Korea, followed by a 111:68 win over Canada.
Deividas Pukis and Edgaras Ulanovas both made fine contributions though Vytenis Čižauskas was the standout scoring 22 points against Canada.

After Lithuania concluded the group stage in coastal city Liepaja, they commenced the Eighth-final round in Riga. Lithuania started with a victory over Serbia, 71:54, followed by a disappointing 105:107 loss to the U.S despite a great effort from Jonas Valančiūnas with 30 points and 15 rebounds. They then finished the round with a 78:59 victory over Egypt, Dovydas Redikas amongst the best.

The quarter finals marked the end of Australia’s journey, defeated by Serbia and also ending the U.S campaign with a defeat by Russia.

Poland may have had confidence leading into their match against Lithuania but what they lacked was a man like Valančiūnas. With 26 points and 24 rebounds the 19 year old from Utena took his side into the semi finals by eliminating Poland 87:75.

The host nation’s neighbours met for the semi final and with a strong start in Lithuania’s favour a third quarter Russian comeback would not be enough to prevent another memorable victory (final scores: 85:68).

It’s estimated that over 9,000 people in attendance at the gold medal match had driven up from Lithuania and after a 43:43 score-line to start the second half the green army of fans influenced an 18:3 scoring run with still a quarter remaining. With six minutes to go the game was all over for the Serbs and the party had begun for Lithuania!

Valančiūnas scored 36 points and Čižauskas finished with 6 assists though, more importantly, Lithuania had won its first gold medal at the championship (final scores 85:67).

In addition to their first gold in the history of the championship, Valančiūnas claimed the tournament’s MVP award. The 213cm tall center also had the highest scoring and rebounding average of the tournament, averaging 23 points and 13.9 rebounds per game.

Valančiūnas was also named in the “All Tournament Team” along with Australia’s Hugh Greenwood. Unlucky not to make the team was Čižauskas who, despite missing two games, had the most assists in his side and the highest average of the tournament with 5.6 per game.

We now congratulate Lithuania in 2011, fingers crossed that they can claim back to back championships in July 2013!