Rory Kelleher, the Lithuania Tribune
aA
Now nicknamed the “Lithuanian nightmare” for his demolition of opposing teams, Domantas Sabonis is ready to fire US college Gonzaga into the NCAA last eight tonight (Friday) in Chicago. 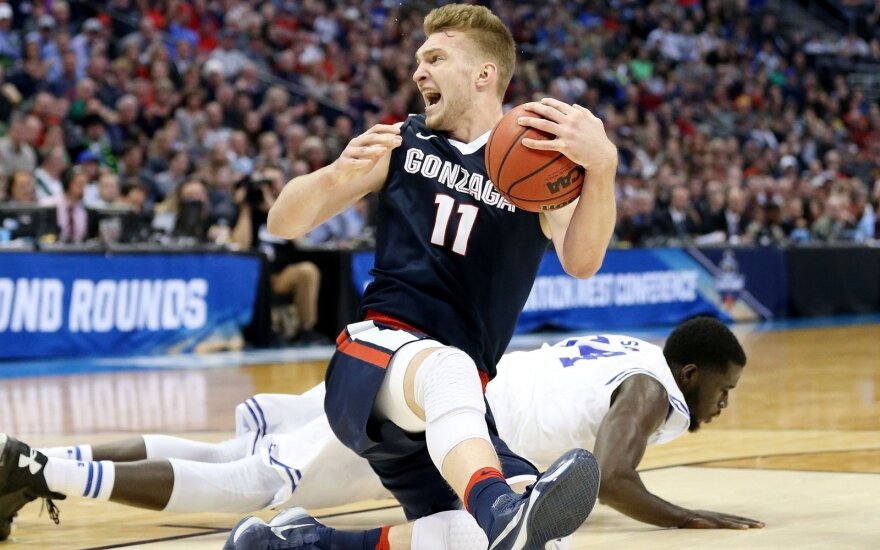 Sabonis, son of Lithuanian NBA legend Arvydas Sabonis, is drawing rave reviews in the US media for his play at centre for the Bulldogs and he is aiming to fire them into the last eight against no. 10 seed Syracuse after disposing of a range of higher ranked teams in the competition already.

“Such feats are all the more impressive when you consider he has been forced to play centre, not his preferred position of power forward, since a season-ending back injury side-lined starting centre Przemek Karnowski earlier in the season,” said the New York Post.

Not surprisingly, Gonzaga coach Mark Few was also raving about him, to ESPN: "He's never off-balance. He just moves so well. I tell my kids that I call him the 'big cat.' He's like a Siberian tiger, a 1,000-pound tiger. He's big but he's agile.

"He's got the best footwork I've ever seen out of a big kid."

NBA teams have been alerted to his talents by his stellar performance during March Madness with Sabonis getting the better of another highly rated young forward in Jakob Poeltl of Utah in their second-round matchup last weekend.

He is quick to credit his father for helping him such heights. "My dad's been a big part of it too," Sabonis told ESPN. "He's helped me with a lot of things, being aggressive and showing me little advantages I can use."

"He just puts so much pressure on you, like foul pressure, because he can drive or post up," said Gonzaga co-star Kyle Wiltjer to ESPN. "And he's very strong down there with pump fakes. You don't know when he's going to shoot. That's a tough matchup for anyone."

Syracuse are laying plans to try and blunt his effectiveness on Friday night but it’s not clear it will have much effect: “He puts so much pressure on your center,” Syracuse assistant Gerry McNamara told the New York Post. “We’ve seen him completely occupy the middle of the paint with his ability to duck a guy in and clear space.

Sabonis’ No. 11 Gonzaga take on Syracuse at the United Centre tonight at 9.40pm US Eastern Time.

Domantas Sabonis led US college Gonzaga to a stunning 68-52 victory over Seton Hall with a...

Sabonis Jr. serious about making his own mark in basketball

I recently had the pleasure of interviewing one of the great young prospects for the future in...