Rory Kelleher, the Lithuania Tribune
aA
The Toronto Raptors pulled off a memorable comeback against the Indiana Pacers in Game 5 of the play-offs despite Lithuanian powerhouse Jonas Valančiūnas being kept shackled by the Pacers. 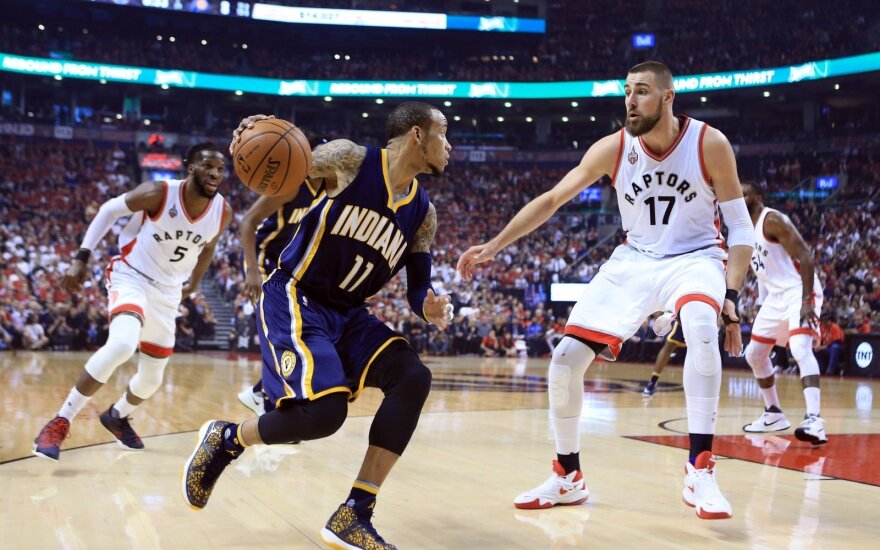 DeMar DeRozen stepped up with a stellar 34 points to help the Raptors overcome a 13-point fourth quarter deficit to win 101-99 on a night when Lithuania’s Valančiūnas had just 5 rebounds and 11 points to go with two blocks as the Pacers succeeded in stopping him by doubling up in defence.

Valančiūnas had been the leading force in the Raptors early victories in the series by dominating the boards offensively and defensively, but DeRozen finally produced the kind of All-Star performance that was expected of him before post-season began, to give Toronto a crucial 3-2 series lead.

The Raptors overcame 39 points from Pacers Star Paul George to stage an improbable comeback and set up the opportunity to clinch the series in Game 6 in Indiana.

If Toronto win on Friday night it will be the first time they have clinched a seven-game playoff series victory in franchise history.

Bismack Biyombo stepped into the breach left by Valančiūnas, grabbing 16 rebounds and 10 points for the Raptors, as Kyle Lowry also finally got going, hitting 14 points.

The Raptors outscored Indiana 25-9 in the fourth, prompting NBA legend Magic Johnson to tweet: "That's why I love the NBA Playoffs because anything can happen, like the Raptors miraculous comeback to beat the Pacers!"

"We were playing free," the Raptors Corey Joseph said. "When you're down like that, you tend to play a little bit more free. There's less on your mind. You just try to lock in and come back, playing fast. We were playing up-tempo. We were playing good defence. ...We were just fighting hard. It's simple."

Lithuania’s Jonas Valančiūnas led the scoring for the Toronto Raptors on Saturday but couldn’t...

Jonas Valunčiūnas helped the Toronto Raptors pound the Pacers into submission in Toronto on Thursday...