Lithuanian chef, while preparing for global challenge: we hold advantages against Western countries

Toma Miknevičienė
Parašyti
autoriui
aA
On the closing night of the best Lithuanian restaurants election, Deivydas Praspaliauskas and his only one-year-old restaurant Armandus once more ranked among the best, taking an honourable seventh place. The chef himself did not appear in the joyous crowd of the event that evening; he was working in the restaurant with his team. He admits that it is pleasant to be appreciated, but it is more important to contribute in promoting Lithuania with his work. 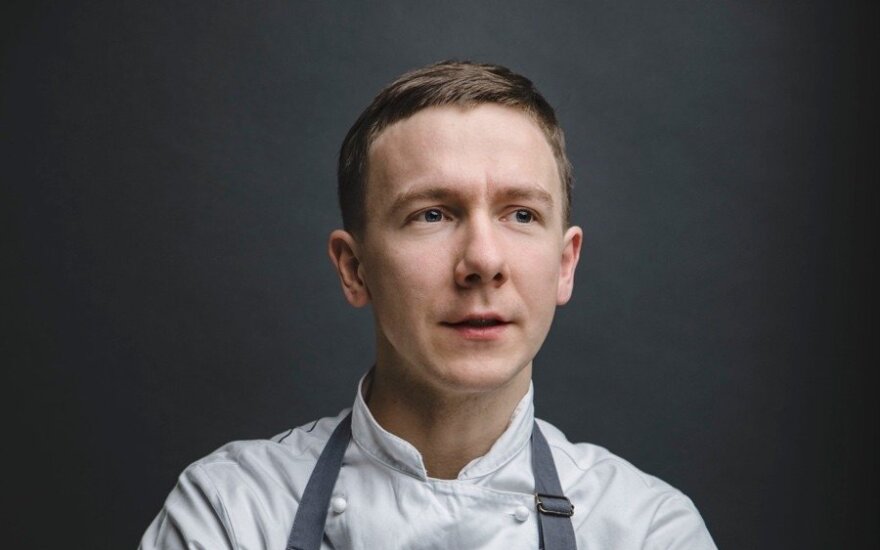 Having become the captain of the National chefs' team, he is actively preparing for the World Culinary Cup 2018 in Luxemburg this November.

This contest, as D. Praspaliauskas believes, is a great opportunity to present Lithuania globally and invite foreigners to come to visit. "The merits of individual chefs are not important for the competition, team work is the key to success. I feel obliged to participate and try to raise the image of Lithuania as a gastronomic country. Along with talking about the beautiful Vilnius Old Town, Gediminas Castle, food should also be mentioned. It is sad, but many still consider that in such a small former Soviet country there can be nothing good. In fact, the food here is wow! We can see that many people visiting become pleasantly surprised after trying the food,'' the kitchen chef proudly adds.

Related articles
The Best Restaurant in Lithuania has been awarded: Martynas Praškevičius triumphed for the second time
Chef Praspaliauskas has opened new restaurant

Comparing to other famous countries of gastronomic achievements, Lithuania has several advantages. First of all, in our country, really high-quality products can be obtained for a relatively small amount of money, says the chef. Another important thing is that we are not yet ready to buy ready-made products. It turns out that in countries where the standard of living is high, for example in Germany, a frequent number of restaurants choose to buy already prepared dishes from suppliers that just need to be warmed up. In order to prove this, D. Praspaliauskas shows a catalogue from suppliers, featuring finished products ranging from meat rolls to desserts. "You see — you do not even need a serious chef. Put everything on a plate, decorate it with a few beetroot leaves and voila!" smiles Mr. Praspaliauskas.

The chef, who just celebrated restaurant's first birthday, says that during this year he became convinced that he does not want to distance himself from the chosen path and strives to maintain his own style of Scandinavian tradition.

Consequently, the global competition will not be easy —the participants will have to comply with strict rules that prevent any improvisations. "I will have to go through myself and do just the way they want to see, not how I would like to do it myself. For example, if I give ice cream with my dessert in the restaurant, I want it to look natural, so I present them in egg-shape. If I were to present some pastries, I would probably break or crumble them on the place. l prefer this way. In the contest, everything must be symmetrical, all 110 portions — identical,'' he says.

7-8 years ago, he was invited to participate in ART competition, which was written by DELFI Food. Lithuania's chef still remembers hilarious misunderstandings that happened there: ''I remember that the teams that we were competing with were very surprised to see that I was trying the food I was cooking. They said: ''You want to say that your food is edible!?'' I was in shock, as in that time I did not understand what they meant by saying such thing. I didn't know that time that in that particular task the taste is sacrificed to the look of the plate,'' the chef smiles and remembers, at that time he even thought that dishes were made of play dough and placed on the tables.

Although initially he was surprised why the task of ART competition required beautifully presented but not necessarily tasty dishes, later he realised that the main task was to surprise. To allow the spectators to immediately notice a dish and take a photo.

The other thing was the hot table task. Here, according to D. Praspaliauskas, the most important thing is teamwork. "The Commission appreciates whether the team is working harmoniously, whether it is able to move around in a clockwise manner, how it interacts, or helps each other. If only one person took the fish and spent three hours cleaning it, it would be a minus. Therefore, our goal will be to help each other to prepare dessert, fish and meat," says the team's captain.

This year D. Praspaliauskas was appointed to prepare a fish dish. So far, it is planned to produce sander fish, but the chef does not rule out the possibility that changes may be some circumstances to make important changes even before the night of competition.

The eight-hour cooking marathon for an experienced kitchen chef does not seem too complicated, since when you get started you forget everything around and simply do what you do best. More excitement brings the last minute, when all the prepared food needs to be beautifully arranged on the plate. That's when, D. Praspaliauskas laughs, the greatest stress and adrenaline begin. Preparation is very important, but if you throw everything on your plate in any way, the result will not be good, and the whole teamwork will go to the ''dog's tail.''

However, it will be hard to predict what tendencies this year will dominate in the minds of judges. "It would be good if we did not stay five years too old five years ahead. As a result, this year we are consulting with one of the judges who has given us some advice. For example, we learned that this year, in agreement of all judges, the greatest attention should be paid to the use of products — to not just place the most beautiful piece of product on the place, and discard everything else," he says about the nuances in the backstage of competition.

The captain of the Lithuanian team believes that the strong side of the team is that they are still newcomers and make it easier for them to shine. For teams that have been involved in this competition for many years, it is a lot more difficult to impress the commission and viewers. "We still have a hurry to come to show that Lithuania is a country that is worthy to come only for food. The team themselves are going to experience, get acquainted with the latest technologies, to see live how they work. There is nothing else than excitement," enthusiastically opposed D. Praspaliauskas.

The Best Restaurant in Lithuania has been awarded: Martynas Praškevičius triumphed for the second time

The best restaurant in Lithuania has been awarded to kitchen chef Martynas Praškevičius'...

Renowned chef Deivydas Praspaliauskas has opened new restaurant in the old town of Vilnius. The...

Hot curry on a hot night

The British Chamber of Commerce in Lithuania (BCCL), ended their 2017-18 season with the 5th Annual...

Lives of Thai people in Vilnius

Vilnius is one of the loveliest cities to visit in Europe. It is also a mini-hub of multi-culturalism,...