Krepsinis.lt
aA
The Lithuanian men’s basketball team will be playing the final pair of matches which they will need to win in order to qualify for the 2019 FIBA basketball World Cup. These games will be played between June 28th and July 1. The first match against Poland will take place on the 28th of June, then they will face Hungary on the 1st of July. 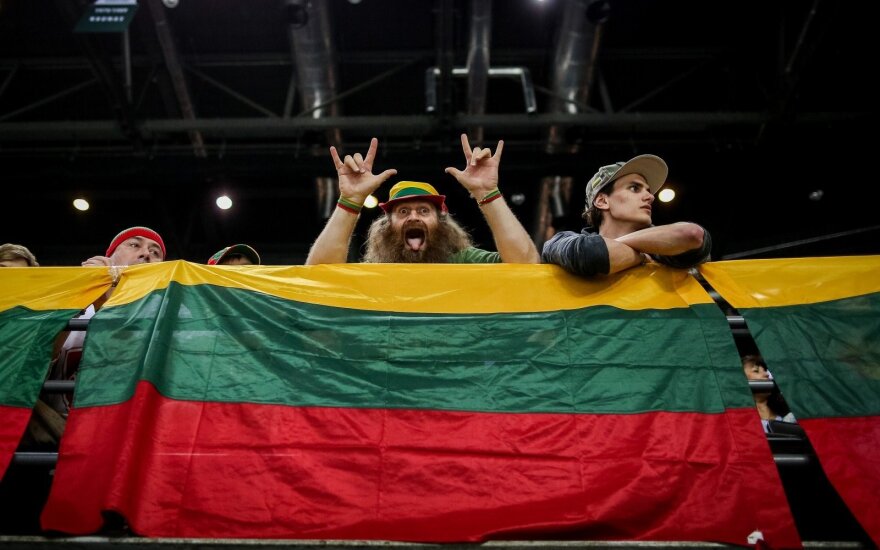 Although both of these games will take place abroad, our Lithuanian fans will still be heard loud and clear throughout both of the opposing teams' arenas!

The organizer and leader of the Lithuanian basketball fans' group 'Mes Už Lietuvą', Tomas Balaišis-Sėkla had this to say about the upcoming games: "It's finally summer again, and finally time for team Lithuania to compete. There will be at least 200 Lithuanian fans headed to Gdańsk. We will also have another 100 fans who will be in Hungary. These fans will travel with the team for this 'third window 'of qualification matches. We must win both to qualify for the FIBA basketball World Cup next year. We are huge fans of Lithuanian basketball, supporting our national team is the way we love spending our summer vacation! Our traveling group will grow larger, especially for the match in nearby Poland. Both of these games are very important. Once we know for sure that we have secured our spot for the FIBA tournament in China next year, we will all breathe a lot easier!"

For those wanting to join this small army of super fans that are ready to go and support our national team at ERGO arena in Gdańsk Poland, tickets can be purchased here.

Unfortunately, at this time there isn't any way for fans to purchase tickets online for the match in Hungary. However, you can buy tickets from the arena ticket office at the time of the event, and the Hungarian basketball federation will set aside an additional block of 100 seats for Lithuanian fans. All members of the "Mes už Lietuvą" fan group can secure these seats by contacting the Lithuanian basketball federation at this website: http://krepsinionamai.lt/fanu-naryste/ , if they wish to go to the game.

The match will take place in Budapest's "Tüskecsarnok" arena. The price per ticket is seven Euros.

"Fans will be heading to the game by practically every means possible. By land, sea and air! "Sėkla said, half-jokingly.

"Fans are organizing buses, arriving in personal vehicles and quite a few will also arrive by plane. Members of Lithuanian emigrant communities will even be swelling our ranks by other means of transportation...for example, Lithuanians might be arriving in Poland by ferry from Denmark."

The airline Air Baltic is now offering special discounts to fans of the Lithuanian national team who will be traveling from Vilnius to either Gdańsk or Budapest. When buying your ticket use the promo code MESUZLIETUVA to get the discounted fare. This discount will expire July 1, right up until the very beginning of the final match in Budapest, Hungary.

Here's a reminder of the 15-candidate roster that was announced June 1st by Dainius Adomaitis for the third window of qualifying matches to make it to the 2019 FIBA World Cup:

As demanded by the International Basketball Federation ( FIBA ), Lithuania will commit itself to...

Executive Committee of the Lithuanian Basketball Federation elected Dainius Adomaitis as the new...