Neal Maloney,
DELFI EN
aA
This was probably the most heartbreaking game I’ve ever had to watch as a lifelong Lithuanian basketball fan. 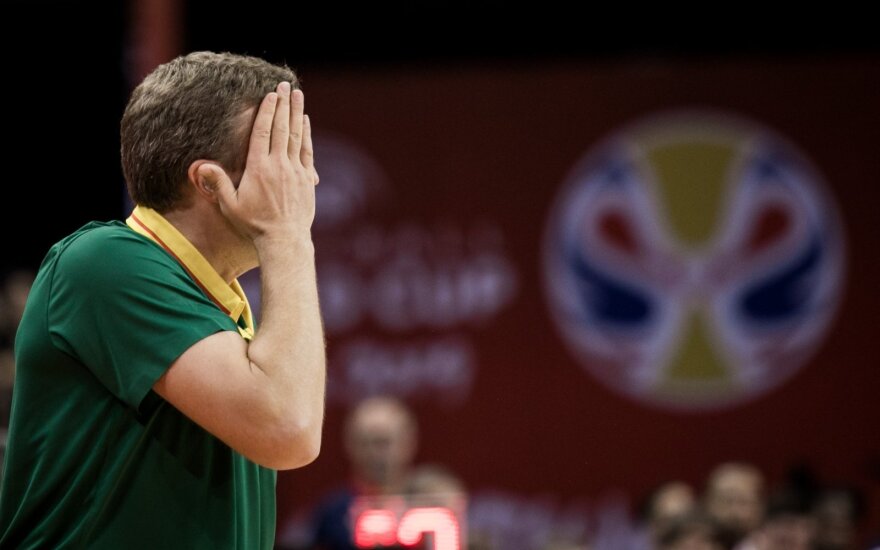 After overcoming a 17 point deficit in the 3rd quarter, the green machine fought all the way back to take the lead late in the game with less than 2 minutes left. Then all of these efforts were in vain because they ended up getting robbed by the officials, who failed to call a crystal clear offensive interference on Rudy Gobert which would have tied the game with under a minute left. Instead, Nando DeColo used the rebound off that missed free throw to spark a fast break which led to a made pull-up jumper and gave France a three point lead that won them the game. Despite having 15 seconds left on the clock, all Lithuania got off was a missed three by Jonas Mačiulis which could have tied the game, but it wasn’t to be. The final score after the controversial finish was 78:75 (14:26, 26:24, 14:15, 21:13), with France moving on to the quarterfinal and Lithuanian fans going home extremely disappointed.

The game started out very badly for Lithuania. Although they came out aggressively, they just couldn’t score or get stops, two things you need to do in basketball. There’s a reason they call Rudy Gobert “the stifle tower” and consider him one of the best rim protectors on planet earth. This was evident early on as he denied Lithuania several times with blocks at the rim. Generally, one of the two NBA bigs for Lithuania has the ability to get going but in this case, Domantas only had a couple of points and JV was also non-impactful in the first. As a team, Lithuania made no threes at all. By the end of the quarter, the score was 26:14 in favor of France, who was definitely hitting their shots early on.

The second quarter saw a mini-comeback for the green machine, their bench mob was playing better than the starting unit had. Lukas Lekavičius hit the first three pointer for team LT at 7:47 left in the half. Marius Grigonis contributed with a three of his own and Jonas Valančiunas finally came out of his shell and was also getting buckets inside. This is definitely due to the floor spacing provided by those made three pointers. By the end of the half, he had 8 points and was even helping to get stops on the defensive end. The team came within 4 points of France before Adomaitis made an ill-fated decision to switch from the red hot JV, to Paulius Jankunas, who didn’t play well at all. France took advantage of the mismatch of 7’1” Gobert on 6’9” Jankunas, increasing their lead to 10 points 50:40 going into the locker room.

In the second half, every Lithuanian basketball fan on planet earth watching this game experienced wild mood swings. They had depression early on, then elation after the amazing comeback from 17 down, to burning anger at the officials for missing the interference call which would have tied the game. Ultimately, disappointment and sadness set in after it became clear they would not be moving on in the tourney this year.

The comeback from 17 down

Midway through the third, it was looking pretty ominous for LT. The second half started out even worse than the first, Adomaitis going with the exact same starting lineup of Kalnietis, Grigonis, Mačiulis, JV and Domas. After France kept scoring and increased the 10 point lead to 17, he went to his bench early. They didn’t disappoint.

Ulanovas, Grigonis, Lekavičius and JV after he was brought back in began a hard slog through hell to get back into the game. Midway through the fourth, on insanely good play from JV, who was playing well together with Domas just like in the Canada game, brought the team back and even took a 2 point lead of their own (72:70) with about 3:14 left on a clutch three from Jonas Mačiulis.

At this point, the coach was making what seemed like unnecessary substitutions, he again continued with his bad gavot of taking out players who were having great games. He would micromanage play switching players every play based on what he perceived was better on offense or defense. Although this is an actual coaching strategy, in this scenario I definitely don’t think it was wise to play this offense/defense type game. He had players in the game who were simply playing well, he should have just let them continue to do that ad not messed around with it in my opinion. France used this inconsistency to take a small lead in the final two minutes.

I personally have met Dainius Adomaitis and he is a mild-mannered gentleman. Not a hothead at all. By the end of this match, he was literally chasing the officials out of the arena and screaming like a maniac. There was however, a very good reason for his behavior. Jonas Valanciunas was fouled with 31 seconds left in the game when the score was 76:74 in favor of France. He made his first free-throw, but missed the second. On the miss the ball was knocked off the rim by Rudy Gobert, which is not legal and should have been called a made free throw by the official to tied the game. Instead, it led to a fast break by Nando DeColo who pulled up for a mid-range shot at the other end, giving France a 78:75 lead,and ultimately the game. Even though Lithuania still had possession with 15 seconds left and they could have tied the game, it ended up being a busted play and desperate three point miss at the buzzer by Jonas Mačiulis.

In the aftermath, Dainius Adomaitis was following the officials out, haranguing them about why they didn’t call the interference. JV can even be seen giving the officials the middle finger as they exited the arena, backing up his coach. The looks in the eyes of the players and fans said a thousand words. Once again in the World Cup it had been a close game, and once again Lithuania had lost. Although they play the Dominican Republic on Monday, it’s over for their chances at a medal this year.

Takeaways from the game and reflections on the future

1) Lithuania is in desperate need to surround their elite NBA bigs with three point shooters. This is an undeniable fact. They hit less than 10 three pointers total in both the Australia and France games...and it was STILL very close both times! Every time Lithuania made a run in both these games, it was always preceded by a burst of consecutive three-pointers, followed by JV or Domas being freed up inside to do damage. Imagine if they could consistently give those guys room to operate by providing a threat from deep all the time. Letting go of Adas Juskevičius in hindsight was a big mistake by the coach. He is the best Lithuanian sniper there is in the world and he might have made a big huge difference in this tournament.

2) Lithuania’s basketball team has the heart of a hungry jaguar as evidenced by the multiple dramatic comebacks in this tournament. They just don’t fold when facing difficult odds. I chalk this up to the Lithuanian national character. The country has had to fight back from the brink throughout their history. The problem is definitely not the players lack of effort, it’s the coaching. Adomaitis is too much of a tinkerer, thinking that he constantly needs to make substitutions even when things are going well. Generally as a coaching rule, if it “ain’t broke, don’t fix it”. The end of the first half JV was getting going and had 8 points. Then he brings in Paulius Jankunas who got utterly abused by Gobert and just like that the French halftime lead went back up to double digits. Late in the game here, he kept taking players out and experimenting with different lineups when we were clearly on a winning trajectory with JV, Domas, Kalnietis, Lekavicius and Butkevicius. Yes, the coach FINALLY played Lekavicius with Kalnietis together and it was working beautifully. Then he started messing with the lineups again to get cute with the offense/defense thing and it fell apart! I don’t think Adomaitis will be the coach of the national team after this year.By his own admission in a post game interview he made it clear that he himself might not want to do it anymore. It is probably for the best in my opinion that they move on from him. We need a coach that is going to have the leadership to win the close games. If Šarunas Jasikevičius is available, he would be a perfect choice considering how many close games he’s led the team to victory.

This has definitely been a sad end to Lithuanian basketball after such high hopes. A massive let down indeed. But no matter how many times the team has let me down, there’s always hope for the future it seems like. This time is no different. Let’s face it, we still have a first-tier NBA front court, good young players like Lekavicius, Grigonis, Butkevicius, Giedraitis, Gebenas and others, there is no doubt in my mind that we will continue to earn our respect in international basketball going forward. Don’t hang your head, just go about the business of your daily life knowing you are a supporter of one of the most storied international basketball franchises in human history. A team that could be down 17 points late in a critical game, but still has the will to fight back to within one controversial call away from glory!