Lithuania no match for Poland in Davis Cup

Aleksejus Podpruginas | the Lithuania Tribune
In their first appearance in the Europe / Africa group zone I, Lithuania played in Poland against the hosting team. In the end, Poland was too big a challenge for Lithuanian tennis players. The score after the three days of playing was 3-2. 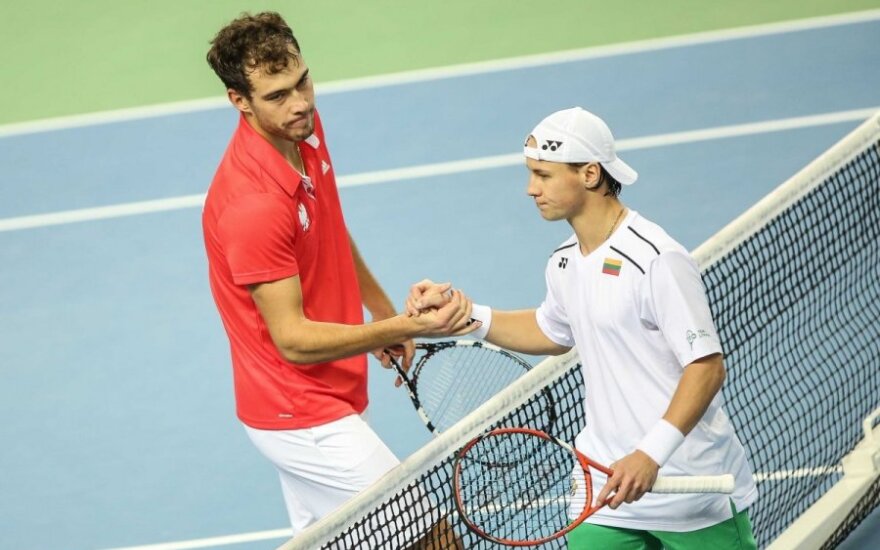 During the first day of the match, the Lithuania’s number-one player Ričardas Berankis, who is currently ranked at the 76th place in the world, did his job with 6-2, 6-4, 6-3 against the world’s number 163 Lukasz Kubot. The second best Lithuanian player, Laurynas Grigelis whose rank is 361, hoped to make a sensation against the best Polish tennis player Jerzy Janowicz who is ranked as the 51st best in the world, but surrendered 7-6 (3), 6-3, 6-4. The score after the first day was 1-1.

According to Davis Cup traditions, the second day of the meetings is the doubles match. Berankis and Grigelis teamed up against Lukasz Kubot and Marcin Matkowsi who is one of the best double players in the world and currently taking the 27th place in doubles ranking. The match was tough, but the Polish team was the better one and won in the end in clear three sets 6-4, 6-4, 7-6 (1), and gave an advantage to Poland before the last and the decisive day.

On the third day, when the scoreboard showed 2-1 to the hosting team, Berankis came to the court to play against Janowicz in all top 100 match. Berankis was the one who was under the pressure. He had to bring the victory in order to even out the score, but unfortunately Janowicz was better this time and secured victory for Poland after 6-3, 6-4, 6-2, and sent Lithuania back to fight to stay in the zone group.

The fifth and the last match was not decisive, therefore it was the best of three sets and not five as the usual matches in the Davis Cup. Laurynas Grigelis won in straight sets 6-4, 6-3 against Kamil Majchrzak who is ranked in the 351st place in the world and claimed the final score of the meeting 3-2 to Poland.

Lithuania will appear for the first time in the Europe / Africa group zone I to face Poland . The...

This Monday, the new world ranking was published. All five Lithuanian tennis players that were ranked...

Tennis: Ričardas Berankis back in Top 100

One week before the end of the 2014 season in tennis, Lithuania’s number-one player Ričardas...