Neal Maloney,
DELFI EN
aA
This game started out pretty bad for team Lithuania. The experienced Czech squad came out swinging, playing like it was a medal game. Lithuania, on the other hand, was coming off two relatively easy victories and it seemed like they were mailing it in early in the contest, not really trying very hard.
Sekite svarbiausias naujienas socialiniuose tinkluose! 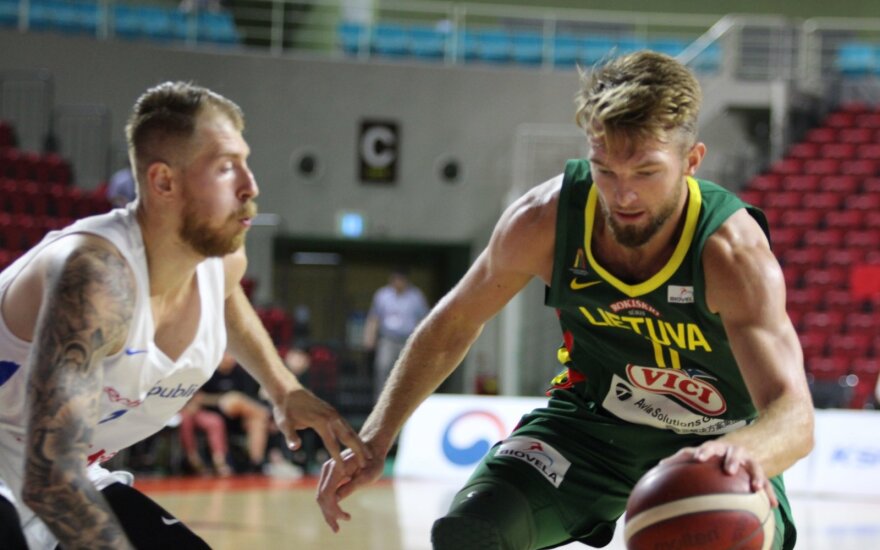 For the Czech team, it was about their pride, having lost to Lithuania many times in the past. They made it known they had something to prove today. The Lithuanians, also a proud basketball nation, once they saw the Czech squad pulling ahead early on, had a gut check and found their inner strength as well! This game was definitely a “knife fight” type of game, with multiple lead changes right up to the very end. Someone who paid to watch this one definitely got their money’s worth. The final result was decided by free throws, which Mantas Kalnietis and Domantas Sabonis obliged the team by making. When the smoke cleared, Lithuania was on top of their Eastern European rival, 82:79 (14:22, 28:17, 23:25, 17:15).

Coach Dainius Adomaitis re-inserted Marius Grigonis into the starting lineup after a case of food poisoning had him laid-up in the hospital for the first two games. Predictably, the young Lithuanian guard was sluggish, especially when having to guard Tomas Satoransky, the Czech team’s NBA point guard who came out scoring at will. The Lithuanians really didn’t have a consistent answer, trying on multiple occasions to get Domas and Jonas going but both studs just couldn’t seem to find a rhythm. The Czech squad had a solid 22:14 advantage after one quarter.

The second quarter brought personnel changes and defensive energy as Arnas Butkevičius once again was a “super-sub” for the green machine. Along with Lekavičius, Ulanovas and Seibutis, who was playing off the bench today, Lithuania went on a run for most of the period that ultimately gave them the lead. They went into the locker room at halftime up 42:39 on a Seibutis steal and a Sabonis dunk at the last second.

The second half war

To start out the second Adomaitis, in his usual routine, decided to change the starting 5. Instead of playing with JV and Domas together, he decided to go smaller with JV and Rokas Giedraitis along with Mantas Kalnietis, Jonas Mačiulis, and Marius Grigonis. This change started out well for Lithuania, and they went on an early run. They ended up taking their largest lead of the game 52:43 off of a classic Mantas Kalnietis pull-up three pointer. Just like that however, the lead evaporated and they saw themselves hanging on by 1 point 57:56 after the Czech team made a run of their own. Dainius kept the second half starters in far longer than usual, it was only with about thirty seconds left to play in the period that Lukas Lekavicius came into the game . Mindaugas Kuzminskas and Domas also came in to the game later than they normally would have. Kuzminskas got several baskets for the team when he finally did play, including backing down Czech veteran, Blake Schlib from almost 20 feet out and making a nice jump hook over him.

The final period saw the lead see-saw back and forth with Dainius trying to throw everything but the kitchen sink in the game to see what worked. Overall, it wasn’t the big men for Lithuania that did the most damage. The Czech team had a 7-footer of their own who played good defense. Both of Lithuania’s NBA studs were close to a double-double on their stat sheets but nothing spectacular. The shining moment for Domas came on the defensive end at the very end of the game by getting the final stop and securing the rebound. Then after he was fouled he calmly drained his two free throws to give Lithuania the 82:79 which they ended the game with. It was not an easy task with only 3.8 seconds left for the Czech team to tie the game. Despite a perfect cross-court pass from Blake Schlib, who inbounded the ball, Tomas Satoransky couldn’t make the game tying three and LT came away with the dramatic victory!

1) It cannot be emphasized enough how crucial Jonas Mačiulis was to this victory. Lithuania was down by four 78:74 with time running out in the last minute and he calmly drained a corner three pointer to put Lithuania back to within a point 78:77. In my opinion, this clutch shot made by Lithuania’s elite veteran was the catalyst that won them the game. After that, LT got a key stop on defense and then Mantas Kalnietis attacked at the other end and was fouled. At the free-throw line, Mantas took care of business, making both his shots and putting Lithuania ahead for the duration of the contest.

There are many Lithuanian fans who are of the opinion Jonas Mačiulis should be the final cut for team Lithuania. I strongly disagree. While Ulanovas played better today than we had seen from him during these preparation matches, he should still be the one to go home. Mačiulis making crucial shots like this on a consistent basis is an important reason why he should remain with the squad. Arnas had another solid game, so I have my doubts he will be the one to go, but with Dainius Adomaitis anything is possible. In my opinion, Arnas has earned a spot on the final roster. If this is the case and Arnas makes it, then it will be between Ulanovas and Mačiulis for the final cut. You definitely want to keep your veteran leader over a mediocre forward if you are Dainius Adomaitis. The final decision should come within the next 24 hours and all of Lithuania is waiting to find out what it will be.

2) Lithuania’s depth was a huge factor yet again in this win today. Being able to bring in Arnas, Lukas, Mindas, Renaldas, Rokas, and Paulius as back-ups is just a huge luxury for the green team. Lekavicius was outstanding today, having him at the ready to give Kalnietis needed rest is huge. He is proving more and more in these preparation matches that he also has the clutch gene in his blood. Although he came in literally for only one play in the third period, he made a beautiful bank shot on the run with the clock winding down that gave LT a one point lead going into the final stanza. Lithuania’s three point shooting was good today too, mostly from made shots beyond the arc by the bench mob of Seibutis, Arnas, Lukas, and Rokas. They needed these points badly today because the bigs were struggling.

3) Overall, the dramatic win today was the best possible outcome for team LT. Had they dominated the Czech team from start to finish, it is doubtful they would practice very hard in the coming days before the tournament. Sometimes winning too easily creates a sense of complacency and false confidence. In this case, they got the win and the earned confidence that goes along with it, but they also got a scare too. A close win that could have gone the other way is often good at “lighting fires under butts” so they practice hard and prepare. This outcome was the best of both worlds. After the two close losses to Serbia, it was definitely a big question mark whether Lithuania could handle business in “crunch time”. They answered that question today for sure, proving they have what it takes to get the win in close matches.

After nine preparation matches, Lithuania heads into the tournament with a very respectable 6-3 record. Their 3 losses came at the hands of elite teams like Serbia and Spain so that isn’t really that bad. In all three of those losses, Lithuania was right there most of the way, not a pushover at all. They’ve also proven that they can destroy teams that make a lot of mistakes or that they can win in close games like today’s win over the Czech Republic. All in all, the squad is healthy and ready to go, which is truly the most important thing. Now it’s time to once again go into battle and let the rest of the world know why Lithuania is a basketball superpower with a storied history!