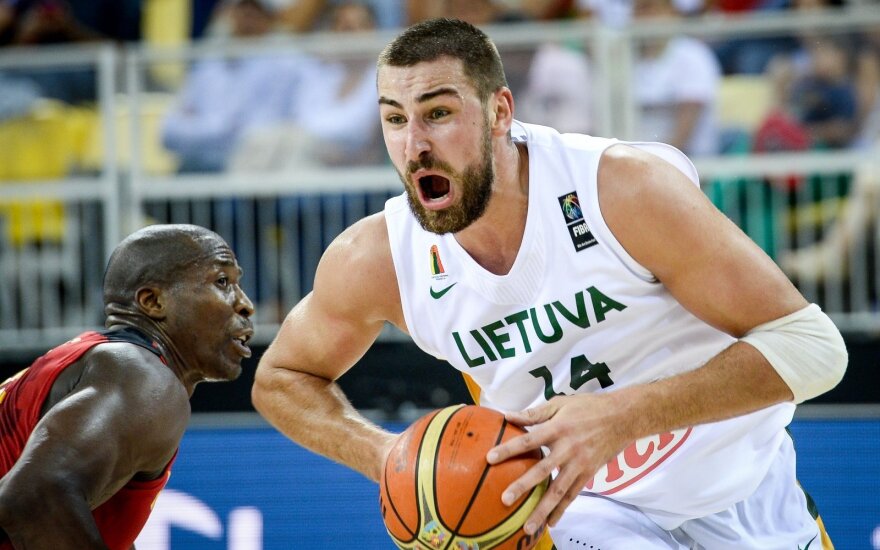 National coach Jonas Kazlauskas kicked off the national team's first training camp with 11 of the 20 players from the country's preliminary squad for the upcoming Olympics including veterans Robertas Javtokas,

Mindaugas Kuzminskas, a key player in the Lithuania side that reached the EuroBasket 2015 Final to qualify for the Olympics, joined the national team midweek.

Mindaugas Kuzminskas, a key player in the Lithuania side that reached the EuroBasket 2015 Final to qualify for the Olympics, joined the national team in midweek.

Related articles
‘My goal is to be the first Lithuanian NBA champion’
Outdoing Dad: Sabonis headed to Oklahoma City after going 11th in NBA draft

Lithuania are not at full strength but will stay play two friendly games in Klaipeda against New Zealand on June 29 and against Tunisia on July 1 giving fringe players hoping to boost their chances of making the Olympic squad an opportunity to prove they are worthy of a place in the finals squad.

Lithuania hope to be closer to full strength when they host an international tournament including Venezuela (10 July) in Vilnius, the Netherlands (12 July) in Alytus and Belarus (14 July) in Kedainiai followed up by a match-up against their arch-rivals Spain, who beat them in last year’s EuroBasket final, on July 18 in Kaunas with a return match in Malaga on July 20.

Lithuania will leave Europe and continue their preparations in Buenos Aires where they will meet Australia on July 25 and then Argentina on July 27, with a return game against Australia in Sao Paolo on July 30 and then a match-up with either Olympic hosts Brazil or China the following day.

Lithuania will compete in Group B at the Rio Olympics with Argentina, Brazil, Spain, Nigeria and a team that wins one of the three qualifiers.

Domantas Sabonis is headed to the Oklahoma City Thunder after being taken as the 11th pick by the...

FIBA has published an expanded list of Lithuanian basketball player candidates for the Olympics -...