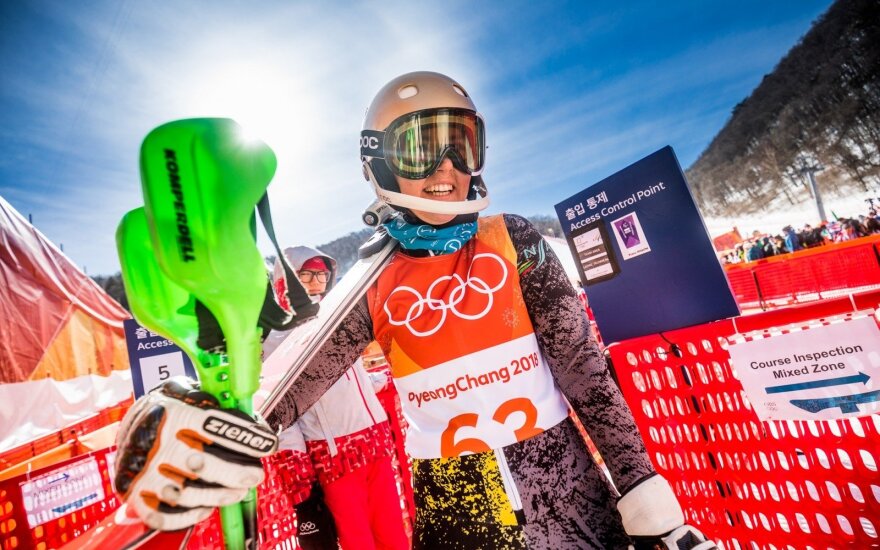 The sunshine continued today in Pyeongchang, South Korea, for the women’s slalom race, postponed from Valentine’s Day. Ieva Januškevičiūtė, 47th after the first run, finished 43rd overall to post her first Olympic slalom result. The race was won by Sweden’s Frida Hansdotter, while the heavy favorite American Mikaela Shiffrin finished just off the podium in fourth.

“The first thing I told the other journalists was congratulations Lithuania for this beautiful day,” she laughed after the first run. “I was trying to be strong. On the top, my coach was saying, ‘You just have to do your job. Nothing else matters.’ So I just tried to do my job.”

The 63-gate course was challenging for all the athletes and there were a number from across the field who didn’t finish.

“It’s a tough course. It’s worth Olympics. I was disappointed that I didn’t push hard enough at the finish. In this kind of slalom you just have to fight. Since I feel quite confident in my slalom, there was only one thing I had to think about,” Ieva told me in the finish.

Though the weather was beautiful, fairly comfortable with only a slight biting breeze, the stands were hardly full. The two groups of Koreans, one from the North and one from the South provided entertainment in the form of a cheering battle between the two runs—an incredible example of the power of the Olympic movement.

The second run, set by the Swiss coach, which might have favored the current leader Wendy Holdener was every bit as challenging as the first. The start order of the second run is determined by the finish time in the first, with the top 30 skiers starting in reverse order. As we counted down the top skiers, there were a number of leader changes. Austria’s Katharina Gallhuber, ninth after the first run, laid down a blistering second run that stood until Hansdotter came down. Holdener slid into second just five one hundredths behind Hansdotter.

“It was tough, I’m not going to lie. The first five gates were disappointing. I thought, ‘I can’t do the whole run like this.’ I was thinking about my performance in the middle of the course!” she told me in the finish, all smiles. From my perspective, it was solid skiing, an opinion echoed by Ieva’s coach at Kronplatz Racing Team, Nicola Paulon.

“The girls did good,” he said of Ieva and her Kronplatz teammate Nino Tsiklauri of Georgia.

A fun side note: The English-language announcer Chris Davenport is from Aspen, CO, and I used to coach one of his sons at the Aspen Valley Ski Club. This morning, I sent him a Tweet to let him know it was Lithuania’s Independence Day and maybe he’d like to mention it as she skied down. As Ieva made her way to the finish on her second run, Davenport wished her Happy Independence Day!

Vasraio 16-ios was definitely on Ieva’s mind since the moment she woke up, and in our conversations today, she reiterated that without Lithuanian independence, she wouldn’t be there. “So, už Lietuva!” she laughed.

This evening, the Lithuanian delegation will celebrate the centennial, and Ieva’s excellent result, here in Pyeongchang.