Neal Maloney,
DELFI EN
aA
Team Lithuania likes to give the crowd their money’s worth. Just like in the match against Korea yesterday, they struggled early. But also just like in the Korean match, they utterly dominated their competition upon return from the locker room after the half. When the smoke cleared, the green machine took their opponent to the woodshed 91:56(19:18, 21:15, 25:11, 26:12). 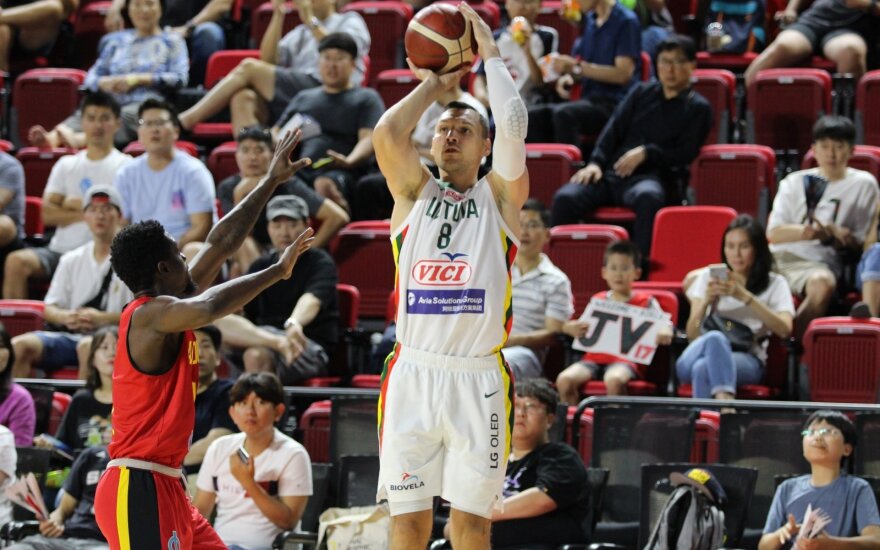 I won’t say that the Angola team is bad, there is definitely a lot of individually talented players. They just don’t play team basketball very well. Early in this match, they were playing aggressive defense and harassing Mantas Kalnietis every second which is a good strategy as he is not the best ball handler. Because of this pressure, Lithuania struggled to get the ball inside to Jonas Valančiunas or Domantas Sabonis early on and whenever they did, the shot clock would be winding down and it would be a rushed shot. They ended up missing more than they made. Angola seemed to have an answer every time Lithuania took a small lead.

Related articles
After a poor start Lithuania comes back with a vengeance against South Korea
Analysis: team Lithuania plays much better without the short shorts!

The officials were pretty much the same crew as yesterday when they played the Koreans, some of the most incompetent ones in the FIBA realm. This didn’t help the situation. Whenever JV would get the ball and was blatantly fouled, the referees did absolutely nothing. The funniest part of the game came when the ball was clearly tied-up with JV and his counterpart on the other team, which is supposed to be called an automatic jump ball according to the rules. At first, the officials did call it as such, then they comically changed their call to a travel on Jonas after loud protests from several Angolan players. It was like they were influenced by the players petitioning them to change the call. They might as well have been wearing big red clown noses. The dangerous part of officiating like this is it emboldens the team to play borderline dirty basketball, thinking they can get away with it. This style of play was evident when Lukas Lekavičius got hammered by Angola’s center during a dribble penetration and he went down hard to the ground. Luckily, he wasn’t injured by this. This was an act of pure frustration by the Angolan team and it should definitely have been a flagrant foul, but Lithuania was lucky to get a regular foul called.

The Angola squad hung around during the first half, making multiple runs that brought their team close to Lithuania. Their three-point shooting was spot on in the first half, and probably 80-90 percent of their made baskets beyond the arc came in the first half. Lithuania kept their lead however based on team scoring, as usual it was a balanced team stat sheet with JV, Mindas, Mantas and Lukas all chipping in. Domas Sabonis was not playing well, most likely due to the food poisoning he had recently suffered in the Far East. The halftime score was 40:33 in favor of team LT.

It was almost identical to the game yesterday against Korea. Again, Adomaitis changed up his starting lineup by replacing Jonas Mačiulis with Arnas Butkevičius and AGAIN Arnas changes the tempo to help Lithuania. His very first action was getting a steal for Lithuania which led to a fast break basket by him at the other end. He then forced a turnover by giving Angola a taste of Lithuania’s version of high-pressure defense. He was very much the reason why Lithuania started the half on an 11-0 run that expanded their lead to 18 points. The Angolan squad just did not expect this aggressiveness at all and it pretty much cost them the game. After three quarters, the green machine was up 65:44 having held their opponents to 11 total points in the period by the defensive culture which Arnas helped create.

In the fourth quarter, it was getting ugly, the Angola team began getting really frustrated and resorted to borderline dirty play because of their hurt pride. As the Lithuanian lead kept getting bigger and bigger with their balanced attack, the play of the Angolan team became more and more aggressive and questionable. Their team was playing like it was the end of a close game 7 in the NBA finals and hacking their opponents like they were YMCA Recreation league bums. This was the time in the game when Lekavicius got sent to the floor with a hard foul by their center which should have been an unsportsmanlike foul, but was just a normal one due to the incompetence of the officials. Their center was definitely trying to hurt Lithuania’s back-up point guard, it was totally obvious.

At some point, when you are up nearly 30 points in the fourth quarter and you are the coach of team Lithuania, you got to ask yourself what’s more important, do you leave JV and Domas in to pad their stat sheet? Or instead, would it not be much smarter to pull out your key guys at this point like literally every single NBA coach would do? There was one situation late in the game when JV was grappling hard with their mad dog center on a play and came away clutching his hand in obvious pain for several minutes afterwards. This is unacceptable. You are up thirty points and that’s exactly why you have a back-up like Martynas Gebenas, so you can pull your NBA stud and he doesn’t get hurt in a game that doesn’t matter! Eventually, he did just that and replaced Jonas with Martynas Gebenas, team LT was up 84:51 with less than four minutes left to play in the game.A good move by the coach, but this substitution happened way too late in my opinion. Luckily, it appeared that JV was fine and no hand injury but for several minutes I’m sure the Memphis Grizzlies and Indiana Pacers front office staff were screaming at their TV sets the same way I was, for Dainius to pull Jonas and Domas out of this game. The final score was 91:56 with Lithuania earning another confidence-building win.

Three takeaways from the game:

1) As I said before, Dainius Adomaitis NEEDS to pull his key guys out of a game when he is up 30 points and the result is clear as day. Not one single person cares whether JV scores 10 or 16 points, his stats do not matter in the big picture, especially when the other team is hitting him hard in the back on dirty plays out of frustration. Just pull him out of the game!

2) Arnas Butkevičius has earned himself a place on this team over Edgaras Ulanovas. There is no question in anyone’s mind that he has been a much more valuable player in these warm-up matches, today especially. If team Lithuania has some struggles during the tournament if Dainius decides to keep Arnas over Edgaras, not one single person is going to say, “Gee,we would be so much better off if we had Edgaras Ulanovas and his 2 points a game.” Not one single person. On the other hand, if Lithuania struggles in the tourney due to lack of aggressive, high-pressure defense, there are quite a few people who will say that it would have been nice to have a player like Arnas Butkevičius. Someone like him who is all about extra effort changing the team energy in a game and setting the culture to a more defensive posture. No one is saying Ulanovas isn’t a good player for Žalgiris, but his heart has just not been in it during these preparation matches. He acts almost like he is entitled to a spot on the team due to his stats from the LKL, Arnas is earning his spot with heart and effort.

3) The balanced scoring of team Lithuania is their most deadly weapon. As someone who has watched every single game, I honestly think we have only two tiers of players. The first tier is elite studs like JV, Domas and possibly Marius Grigonis and Mindaugas Kuzminskas. The second tier is made up of literally everyone else on the team. There is no third tier of players who will give you a noticeable drop off in production like a lot of other teams have. This is an amazing luxury! We can insert multiple players into the system and there is stability and consistency on the court. Lithuanian players, even those who I mentioned are in the first tier, do not get the least bit upset if they are pulled from the game by the coach. Everyone just does their job without any massive egos intruding. This could quite possibly be the secret weapon for the squad going into the tourney! Many other teams have fearsome starting 5’s, but will be vulnerable when their weak bench comes in.

There is just one game left versus the Czech Republic, which is a respectable Eastern European opponent, similar in style of play to Lithuania. Let’s dispatch them quickly and then rest our players so we can focus on getting off on the right foot in a tough group H with a win over Senegal on September 1!

This was the one we needed to win. You can’t go into a World Cup tournament not having defeated your...