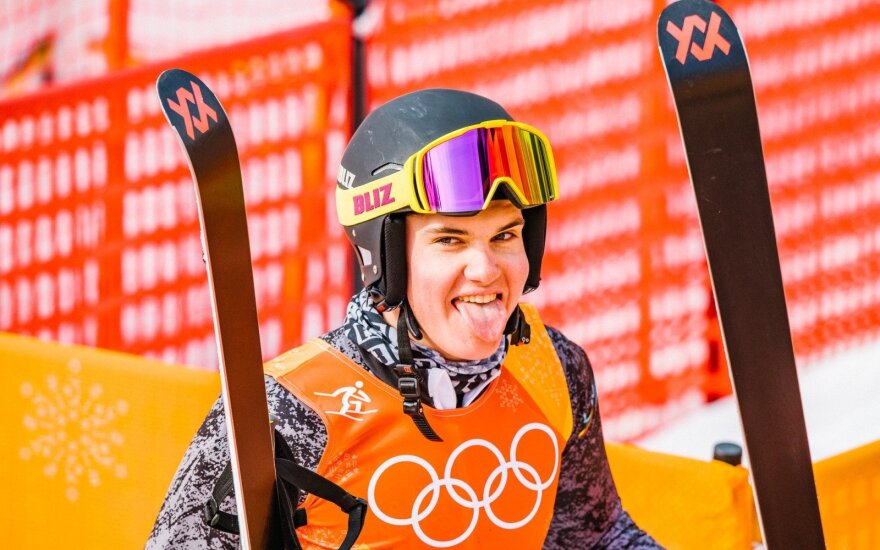 Andrej Drukarov became the fourth Lithuanian man to compete in alpine skiing in the Olympics when he launched out of the start gate at the men's giant slalom in Pyeongchang, South Korea. He follows in the footsteps of Linas Vaitkus, Vitalij Rumiancev, and Rokas Zaveckas.

The 18-year-old finished the two-run race in 59th place, higher than he would have liked, but respectable nonetheless. The first run on the challenging Rainbow 1 course claimed more than 20 skiers, including two top-ranked skiers within view of the finish line.

"I think I controlled it a bit too much on the first run. The coach told everyone in the start that there were a lot of DNFs, so we decided to go for the finish," explained Drukarov. He admitted to being nervous in the start and that was evident in his skiing, but vowed to attack his second run.

Austrian powerhouse and gold medal winner of the alpine combined earlier in the week Marcel Hirscher led with a comfortable .63 second lead over France's Alexis Pinterault.

The second run was somewhat more forgiving than the first, though no less challenging with plenty of air on the rollers and tricky transitions from the flats to the steeps. Racers start in order of their first-run time with the top 30 running in reverse order. Tenth after the first run, Norway's Henrik Kristoffersen stepped on the gas to hold on to the leader's position up until Hirscher got on course. Hirscher ultimately won by 1.27 seconds, an impressive margin in alpine ski racing while Pinterault took the bronze.

It's hard to put a result like 59th in perspective for people who aren't ski racers. Keep in mind there were 110 racers from 69 countries that started the men's GS—and only one winner. In ski racing, success is usually not measured in medals, it's measured in personal bests, each a higher rung on the ladder toward the ultimate prize.

"It's good he took only eight seconds from Hirscher on the second run. The first run, he was too emotional and he skied too safe," said coach Giuseppe Compagnone. Drukarov was more than 11 seconds off Hirscher's pace in the first run. A relative improvement of more than three seconds is significant. "I think 59th, it's about where he should be. We will see the slalom."

Drukarov says he's only just getting started in his Olympic career. "I've talked about future Olympics with Vida Vencienė. She said this is my warm-up. Beijing in 2022 is what I'm dreaming about, that's my goal. That's what I'm going to work on these few years," Drukarov shared with me.

He is the youngest member of the 2018 Lithuanian Olympic team, which includes nine athletes from biathlon, cross country skiing, and alpine skiing. Born in Vilnius, he moved to Switzerland at the age of 10 to live with his mother who had moved there to find work. Living in the tiny village of the Andermatt about two hours south of Lucerne. "The only thing that people did there was ski," he told me.

Drukarov now lives and trains in Bormio and is a member of the Snow Bees ski club in Vilnius. When he eventually is done ski racing, he says he wants to start his own club to share the sport with the next generation of Lithuanian kids.

Veteran Kristaps Zvejnieks of Latvia scored the best Baltic result with a 35th place in his third Olympic giant slalom. He was 62nd in Vancouver and 43rd in Sochi.

"It's a challenging course, I have to say. You have to fight so much," he said. "I didn't super charge the last part of the course. I thought I might just take it easier. I saw a lot of guys going out there." There are televisions in the athletes' tent at the start. It's common for the racers starting with higher numbers to watch the top guys.

Zvejnieks was expected to race all five events, but with the program shifting around because of weather, he decided to focus on the technical events. "The downhill was planned to be a training run for the combined. They changed it so super combi was first, so there was no need to do the downhill. After the combi, I needed to step on GS skis and SL skis."

He finished 26th in the combined, his best Olympic result to date.

Estonia's Tormis Laine, the youngest of the three Baltic competitors put together two clean runs to finish 40th. The 17-year-old attends a ski high school in Austria. "You can always do better, but it was my first Olympics so I would have been satisfied with anything, and now it went pretty well. It's incredible to be here. It's just motivating. I'm just 17 years old. It gives me another push to go back home and start training again," he told me jubilantly.

While the women's slalom and giant slalom were stymied by high wind, snow, and fog forcing a number of postponements, the men's GS started on time under bluebird skies and a crisp 33 degrees.

Fans from the traditional skiing powerhouses of Austria, Switzerland, and Norway were out in force, however there wasn't the usual pandemonium that surrounds World Cup ski racing in Europe. Across events and venues, the Korean organizers are constantly asking the fans to "quiet down so the athletes can concentrate." Spectators were told to leave their cowbells at home.

The Baltic skiers will be back in action in men's slalom on February 22.