(2)
BNS
aA
The two teenage sons of LaVar Ball, a flamboyant Los Angeles businessman who has made headlines due to his feud with US President Donald Trump, landed in Lithuania on Wednesday night to play for a local basketball club that they see as a stop on their "journey" to the NBA's Los Angeles Lakers.
Sekite svarbiausias naujienas socialiniuose tinkluose! 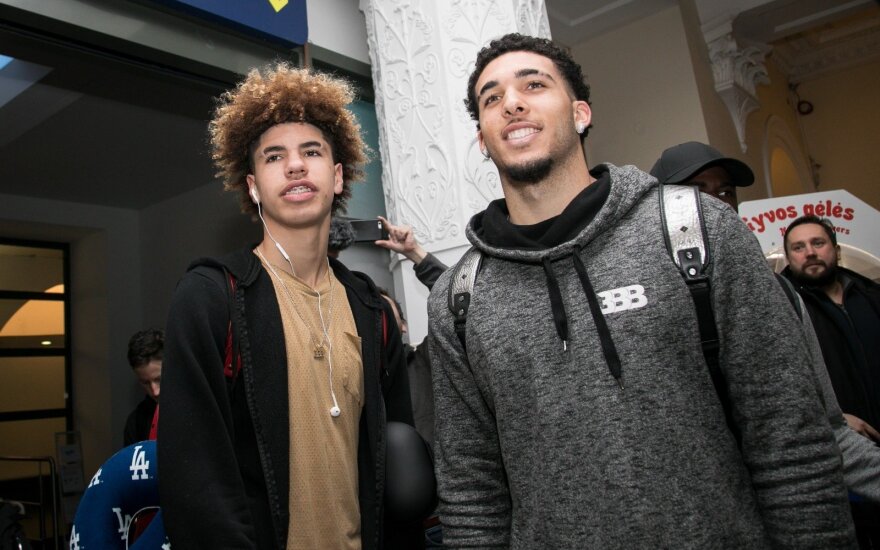 "Heck, yea, this is along the journey to the NBA. I'm gonna get all my boys on the Lakers, but we gonna come over here and have some fun first," LaVar Ball told reporters at Vilnius Airport.

"You know what, we didn't choose Lithuania, Lithuania chose us!", he added.

The Ball family were greeted at the capital's airport by several tens of Lithuanian and US journalists and onlookers.

A special Party Bus took the Balls to their new residence in the southern Lithuanian spa resort of Birštonas, close to the town of Prienai, which hosts BC Prienai-Birštonas Vytautas.

The Lithuanian club makes no secret that the contract with the 19-year-old LiAngelo and his 16-year-old brother LaMelo is more of a commercial than a sports project.

Related articles
Hour of the star for Prienai: Basketball club welcomes US celebrities  (1)
The Ball brothers may bring Lithuania more harm than good  (3)

BC Vytautas has already attracted a new sponsor after the deal was signed and is currently in talks with several other potential sponsors.

Prienai and Lithuania as a whole grabbed US media attention following the signing of the contact in early December as TV anchors tried to correctly pronounce the names of the town of 10,000 people and of the Vytautas club.

LaVar Ball last year came into media spotlight after Trump accused him of being ungrateful for his help in getting his son LiAngelo released from jail in China for shoplifting.

Hour of the star for Prienai: Basketball club welcomes US celebrities (1)

Prienai, a city in southern Lithuania, is living the hour of the star – it has become the Lithuanian...

The Ball brothers may bring Lithuania more harm than good (3)