Jennifer Virškus from Pyeongchang
aA
Ieva Januškevičiutė finished the women’s GS in 54th position; Mikaela Shiffrin of the U.S.A. won her first of what is likely to be several gold medals of the Games. 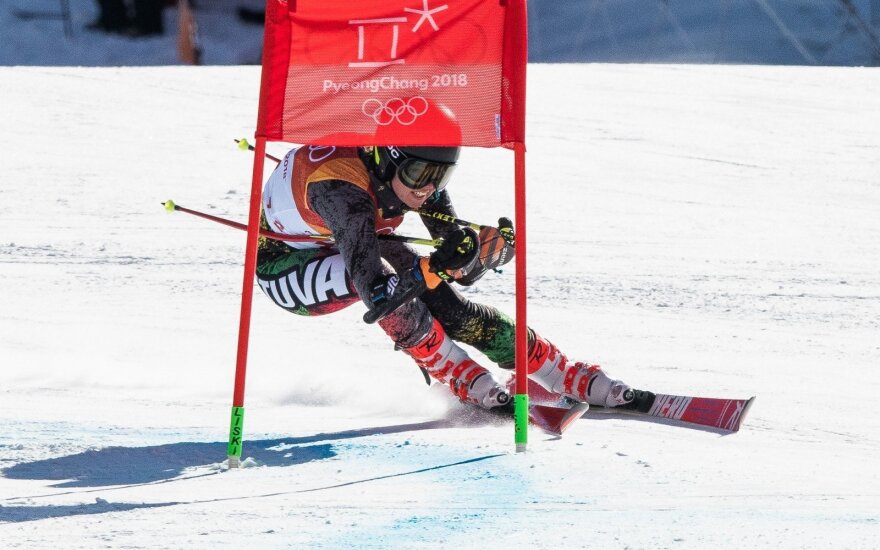 The stadium was only partially full but the fans who turned up were having a great time—including a group of North Korean women and a group of South Koreans flying Unified Korea flags, a large American contingent to cheer for Shiffrin, and Ieva's personal fan club made up of myself, my brother Joe Virskus, and his girlfriend Rachel Little from Great Britain.

Related articles
Alpine skier Ieva in Pyeongchang: I’m exited but I don’t feel the Olympic vibe yet
President – the new government has enough strength to adjust

Wearing bib #1, Italy's Manuala Moelgg, who is from Kronplatz, Italy, and sometimes trains with Ieva, laid down a blistering run that not even Shiffrin could best on the 49-gate course. Her time of 1:10.62 seconds was still the quickest when Ieva launched out of the start house.

The snow condition held up quite well through to the last racer with only minimal ruts building up. Ieva dove onto the final face with power, but skied defensively on the bottom part of the course where Moelgg really made her gains. She finished in 62nd position.

"On top I was feeling good and then later, maybe I was not fast enough, but I couldn't catch the rhythm. I was worried about the bumps. Everybody kept telling me to pay attention to the roller bumps. In training, the only mistakes I make are on the roller bumps. So I thought, 'I can't do a mistake here.' I think I was skiing too much in defense, and I'm not really happy with the down part at all," Ieva told me after her run.

This is her second Olympic Games but today's result is her first—in Sochi she failed to finish either of her two races.

"I was not fighting enough. I wasn't brave enough. On the second run I'm going to be brave. You have to be brave," she said.

Ieva wasn't the only one who felt like she'd left something on the hill in the first run. "I was loose, I put some of my good skiing from training in there but I also feel like I can go a little bit harder and there's nothing to hold back for in the second run," Shiffrin told Reuters.

Ieva checked in with me after inspection and told me the course for the second run was looking "sweet" before heading off to warm up.

The top 30 skiers go in reverse order for the second run. From 31 and up, they start in order of the first run ranking. The podium shifted a lot as we counted down the top 30 with a number of notable skiers not finishing. The rollers that Ieva was concerned about in the first run were launching several skiers into the net.

Shiffrin, starting 29th, delivered a masterclass in aggressive GS skiing and grabbing the lead from Norway's Ragnhild Mowinckel. Moelgg had a disastrous second run that dropped her to eighth, while her teammate Frederica Brigone held on to third.

It's tough standing in the grand stand, or even on the side of the course, knowing you can't do anything more to help your athlete. I was wildly nervous as we got closer and closer to Ieva's start. When I finally saw her pop over the ridge onto the steep front face, she was cruising, looking strong and balanced. Aggressive and rhythmical. It was a solid second run. Ieva had her result, a respectably 54th in the world at the Olympic Games.

After the race she stood for a few minutes with the Lithuanian media before being rushed off to doping control. "I'm tired, I wish I could go rest, and instead I have to sit and pee in a bottle," she told me via Facebook Messenger. Athletes are randomly selected for doping control. While I was waiting for Ieva, her friend and teammate at Kronplatz Racing Center Nino Tsiklauri of Georgia told me on the first day just as she had finished getting dressed and was about to head out for training she was pulled aside for doping control and had to sit there for almost two hours drinking water in order to complete the test.

When Ieva was finally released and driven back down to the base area, I caught up with her outside the wax cabins—a village of shipping containers made into waxing rooms for the various national teams.

"I'm so glad you're here," she said as I gave her a hug—not that I would miss it!

"The first run was definitely not my best skiing. The second run at least I had attitude," she laughed.

In Sochi, Ieva did what I couldn't—she became the first woman to compete in alpine skiing for Lithuania. Today in Pyeongchang, she finished what she couldn't in Sochi. And it takes a huge weight off her shoulders, that expectation to finish. "I think it's going to be easier tomorrow, not the course is going to be easier, but I don't have to keep in mind that I have to finish the stupid race. Now I can relax."

The women's slalom, which was postponed from Wednesday, is scheduled for Feb. 16 at 10AM local time.

Bronislovas Vyšniauskas , president of the Lithuanian Weightlifting Federation and the coach of...