On 1–6 July, Šiauliai hosts the international folk contest-festival “The Flower of the Sun” for the seventh time; it brings joy, colours and diversity of events to city residents and guests. 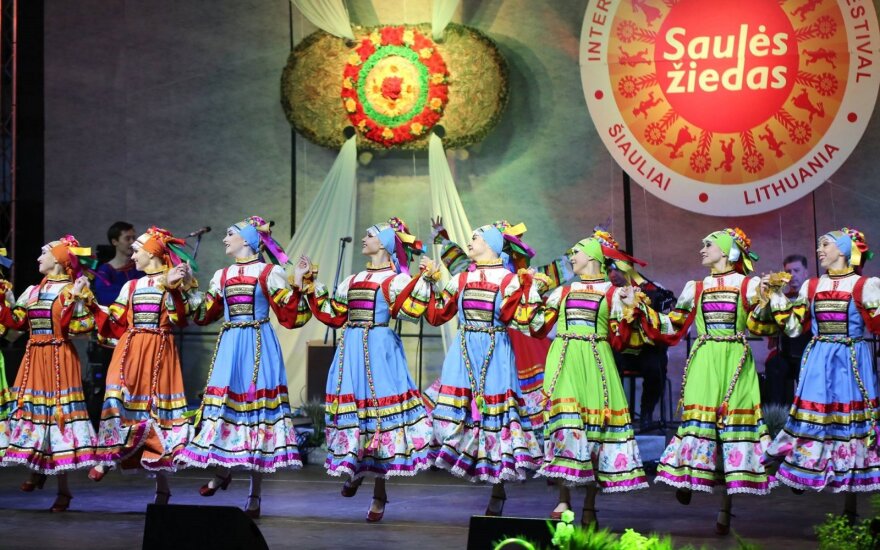 This year the event attracted over 700 folk performers, singers, dancers, musicians even from the four continents. Cultural heritage is demonstrated and shared by ensembles from Brazil, the USA, Poland, Finland, Latvia, Portugal, the Ukraine, Turkey, Russia, India, Slovakia and Lithuania. In total, 37 folk ensembles take part in the festival. This summer, representatives of the USA, Brazil and Portugal take part in the "Flower of the Sun" for the first time.

The festival maintains a tradition to introduce the ensembles representing different regions of the countries every year; therefore, all foreign performers participate here for the first time.

The marathon of the events of "The Flower of the Sun" started on 1 July with a parade of the participants in Šiauliai Culture Centre and showing up to the city residents and guests. Participants, organisers and guests of the festival were greeted by Šiauliai city Deputy Mayor Justinas Sartauskas, the Cultural Attaché of the U.S. Embassy in Lithuania Althea Cawley-Murphree addressed the audience in Lithuanian.

Best wishes to the festival were sent by the Honorary Consul of the Republic of India in Lithuania Rajinder Kumar Chaudhary. One of the most famous Lithuanian ethnomusicologists, television and radio presenter, chairperson of the contest jury Zita Kelmickaitė greeted on the occasion of the opening of the festival and invited all audience to sing a Lithuanian folk song, to rejoice that the rain brought crowds of people to the hall and kept them together – this is the opportunity to see other people around, to admire own and foreign traditional culture, to let "The Flower of the Sun" unfold and blossom.

Visitors of the festival already have been surprised by the performances of several Lithuanian and foreign ensembles so far.

For instance, guests from Brazil covered even twelve thousand kilometres to demonstrate that Brazilian people are not only excellent samba, bossa nova or lambada dancers but also true masters of gaucho dances. Gaucho dances are among oldest Brazilian popular dances characteristic of impressive theatrical performance.

The ensemble from India was, perhaps, the most exotic and most surprising. These performers represent not exactly the Indian folklore but rather ethnic culture of the mountainous region of Mizoram, located between Myanmar and Bangladesh. The guests from Mizoram demonstrated impressive folk dances which date two thousand years or more back and performed songs in a rare Mizo language.

American culture was represented by an energetic group of five musicians from the State of Maine. They play traditional music for contra style dances.

The traditional Night of Art and Culture under "The Flower of the Sun" is an exceptional event of the festival. During it city residents and guests plunge into the colourful fiesta of events lasting well beyond midnight with sounds of various international music, songs, demonstrated films, traditional dances taught by representatives of different countries.

"The Flower of the Sun" will end with a gala concert involving all participants of the festival; at the end of the gala concert, the "Grand Prix" winner of this contest-festival will be announced and awarded.

As the Director of the Organising Committee Zenonas Ripinškis says, "The Flower of the Sun" stands out among other international festivals because here the participants of this festival also take part in the contest programme, comprising six categories: traditional and stylised dances, traditional singing and traditional music ensembles and soloists. The international jury, comprising professionals from Spain, Latvia, Colombia and Lithuania is headed by a famous musicologist Zita Kelmickaitė".

This is one of the largest folk festivals in the Baltic countries; over twelve years it has earned recognition and good name not only in Lithuania but also outside its borders. Currently, "The Flower of the Sun" is considered to be among the best events representing Šiauliai city; and international folk art organisations praise this festival for excellent organisation , building bridges among different cultures of the world. No surprise, "The Flower of the Sun" is included into the official lists of events by the International Organisation of Folk Art IOV (under UNESCO) and the Federation of International Dance Festivals FIDAF.

A thousand of songs will be performed during the Lithuanian Song Festival , starting this week, and...

The Lithuanian Song Festival started in Vilnius on Sunday, dedicated to the 100th anniversary of...