Louis Garrick
The town of Zarasai, nestled in the picturesque north-east of the country amongst sparkling lakes and gently rolling hills, may be best known as a summer holiday destination, but for two days this weekend it chose to highlight a different side of its cultural history. To mark the European Days of Jewish Culture, the Zarasai Regional Museum organised three events that gave the public an opportunity to reflect on the region's largely vanished Jewish heritage. 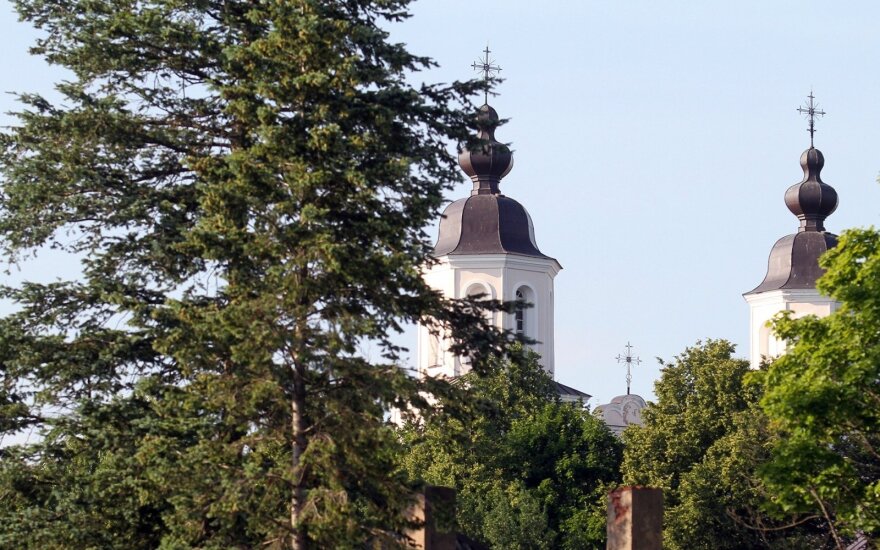 Zarasai was one of sixteen towns and cities across the country that participated in the annual pan-European festival, the theme of which this year was Jewish languages.

The first of the three events was the opening of an exhibition of pictures by renowned American cartoonist Al Jaffee, who spent part of his childhood in the 1920s and 30s in Zarasai. The comic-book style images, which he made to illustrate Mary-Lou Weisman's 2010 biography of him, depict scenes from pre-war shtetl life. A cartoon version of Jaffee as a boy can be seen fishing in the lake, inventing a flying toy, retching at the odour emanating from an outhouse, celebrating shabbat with his elderly relatives and, poignantly, bidding a tearful farewell to his mother.

Related articles
The trap of travesty: Shoah as a show-subject
For Your Freedom and Ours?

Jaffee, who would win fame as the creator of MAD Magazine's satirical “fold-in”, was taken to the United States at the age of twelve by his father, never to see his mother again. Such dramatic childhood experiences surely fed the world-weary sense of irony that is the hallmark of his work, which he continues to produce even in his ninety-sixth year. Zarasai District Municipality this year made Jaffee an honorary citizen of the town.

Accompanying the exhibition opening was a musical performance by Israeli singer-performer Esti Kenan Ofri and percussionist Arkady Gotesman of Vilnius, a duo touring the country at the moment. The pair connected through the revered Lithuanian-Israeli pianist Slava Ganelin, a pioneer of free jazz in the Soviet era with whom both had collaborated separately. Ofri described Ganelin as having given her a “kind of oxygen” unlike any other musician.

In keeping with the broader theme of the European Days of Jewish Culture, Ofri selected songs in a variety of dialects of two Jewish languages: Judaeo-Spanish, which is a centuries-old Sephardic language also known as Ladino, and Hebrew. Much of Ofri's practice is dedicated to women's music, and she made the point that in Sephardic Jewish history, Hebrew was often exclusively a male tongue, and it is by women that the traditions of Ladino song—often songs of love, of birth and lullabies—have been preserved. A class from Zarasai's gymanisum was in attendance, and having sensed their restlessness, Ofri used her haunting contralto voice to calm and entrance them, the gentle Ladino songs taking precedence over the more spiritually intense pieces in Turkish and Yemeni dialects of Hebrew, the language of the ancient Israelites.

These two public offerings, along with a scantily attended excursion to sites of Jewish significance the following day, were part of Zarasai's broader effort to preserve and commemorate its Jewish heritage, something Zarasai's Deputy Mayor, Arnoldas Abramavičius, has been encouraging for almost a decade. According to Abramavičius, for more than half a century the region's Jewish history was hidden, firstly during the Soviet era, when even monuments at mass graves did not specifically mention Jews or the Holocaust, and secondly in the period after independence from the Soviet Union when many Lithuanian patriots downplayed the extent to which Lithuanians collaborated with Nazi occupiers to eliminate Lithuania's Jewish population, or denied their involvement altogether.

Cultural activities like those at the Museum serve not only to remind the public of the atrocities that took place in World War II, Abramavičius said. They also bring to light the richness of prewar Jewish culture in the region. “Our community was more complex in prewar times than many realise, with the influences of different religions and different cultures,” he said, “and we have to break down stereotypes [to the contrary].” He emphasised that it is “especially important for the younger generation” to understand “that the Jews were Lithuanian citizens too.”

Zarasai District Municipality's efforts to this end go beyond the European Days of Jewish Culture. A week earlier, the Israeli Ambassador to Lithuania, Amir Maimon, unveiled a new monument to the perished Jewish people of the town of Dusetos, in the location where the local synagogue once stood. The occasion was the seventy-fifth anniversary of a Holocaust massacre in nearby Krakynės forest, in which more than 2,500 Jews were killed.

Looking to the future, Abramavičius hopes the Zarasai Regional Museum will someday be able to exhibit the work of the Zarasai-born artist Yehuda Pen, who taught the modernist painter Marc Chagall, and he intends build on growing relationships with former inhabitants of Zarasai and their descendants in the United States and Israel.

The trap of travesty: Shoah as a show-subject

I thought initially that if one would have a nerve to watch the sick entertaining video from the...