What does King Mindaugas and his name mean for Lithuanians?

The Lithuania Tribune, Kauno Diena
aA
Lithuania celebrates the coronation of King Mindaugas today, July 6. This national holiday, also known as Statehood Day and as the Mindaugas name day, celebrates Grand Duke Mindaugas, who was to become the only crowned King of Lithuania. 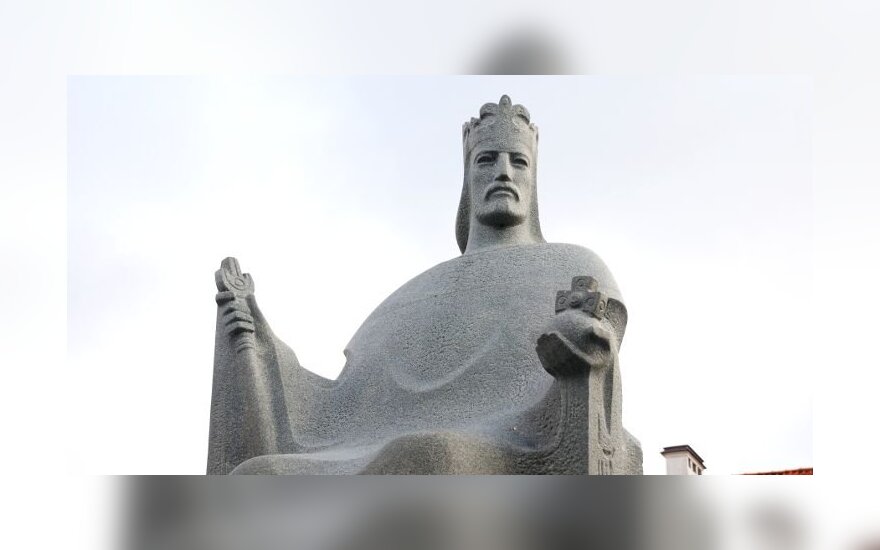 Statue of King Mindaugas in Vilnius

Little is known about Mindaugas and his rise to power. It is believed he achieved his position through strategic marriages and assassinations. He was crowned in 1253 as the King of Lithuania, which historians believe was part of an attempt to form an alliance with the Livonian Order.

Despite a dearth of information about this historic ruler, Mindaugas is a very popular name in Lithuania.

Someone named Mindaugas is considered to be hard-working, ambitious and independent. A person with the name might be prone to chasing perfection, honest, trustworthy highly energetic and dominant.

With the rise of nationalist movements in the second half of the 19th century, Lithuanians began to remember the names of their grand dukes and the founders of their state. Until then, ancient Lithuanian traditions often dictated that children should be named after honourable or successful family members to preserve their memory.

For a while, Vytautas the Great was considered the most honourable and favourite ruler from the Lithuanian Grand Duchy. Families with three brothers would often give them the names Vytautas, Kęstutis and Algirdas. At the time, naming children after Mindaugas, Gediminas or Jogaila was unheard-of.

During the inter-war period, Lithuanians “rediscovered” the name Gediminas, as it was associated with the battle to reclaim Vilnius – this grand duke's city.

The name Mindaugas was long avoided – perhaps because, in addition to being one of Lithuania's first Christians and a unifier of the state, he was also known for his fratricide.

What's in a name?

“The name is the very first gift that parents give to their children. This gift determines their lives,” believes businessman and member of the Lithuanian Language Defence Society Mindaugas Karalius.

“It's sad that, in the top 10 most popular Lithuanian names, there are only one or two truly Lithuanian names. Parents aren't thinking, they just give in to any influence.”

In Karalius' family (whose surname means “king”), most of the men have Lithuanian names. His son is Tautvilas, his father is Vytautas and his grandfather is Jonas. He is also certain that his parents consciously chose the pairing of his name and surname.

“We have a lot of fear and self-criticism regarding Lithuanian names, terms and the language itself. Now, everyone emphasizes the English language. I don't know where the idea came from for that, by naming something in English, you'll seem more advanced. That's not how advancement is measured, however. If that's what we thought, then the mark of advancement should be the Hebrew language.

"I am convinced that, as a society, we should have as many Lithuanian symbols in our lives as possible. Lithuania is the state where the Lithuanian nation lives, develops and grows. It doesn't live in London, it lives here. As they say, nobile obligare – your lineage obligates you. If you were born a Lithuanian, do at least one good deed for your loved ones and your state every year,” said Karalius.

It's hard to say what sort of characteristic traits Mindaugas had and what sort of traits parents wish upon their children when they give them this name. Descriptions of Mindaugas are primarily based on his enemies' texts, which simply mention facts without describing the personality of the leader of our state.

Therefore, many Lithuanians who give their children the name Mindaugas base their concept of the name on the image created for Justinas Marcinkevičius' play Mindaugas.

“The picture of Mindaugas we have in our minds is less an image painted by his contemporary historical chroniclers and more our own imagination. This is more of a symbolic person than a real one with specific characteristics. I think that this is also a good thing. Legends are more important than reality because they create our self-consciousness. The Estonians have a myth about the origin of their nation – the Kalevala – and the Latvians have the Lāčplēsis. Lithuanians either has no such myth or has forgotten it.

"We rely on history as re-imagined by poets. Our enemies create a myth about the nation's unifier and the creator of our state, Mindaugas,” said Karalius.

Remembered by a priest

Until the 18th century, when interest in Lithuania's history grew, both Mindaugas and Gediminas were forgotten.

Both of these grand dukes sought to conquer more lands for Lithuania. Therefore, neither was remembered as well as Jogila, who left the country to sit on Poland's throne while still maintaining his rights in Lithuania.

Historian and Middle Ages history specialist Stephen Christopher Rowell explained that Mindaugas was rescued from forgotten history by a priest named Juozas Stakauskas, who wrote a dissertation in German called “Lithuania and Western Europe in the 13th Century.”

This priest believed that claims that Mindaugas had renounced Catholicism was slander from the Teutonic Order.

Though he conceded that Mindaugas may not have been loyal to the Order, he believes he did not renounce his religion.

What we know about Mindaugas?

He was the first known monarch of Lithuania.

He was the first grand duke and the only king of Lithuania.

He was the first ruler to adopt Christianity.

No one is sure whether or not he renounced Catholicism, so he has no place in the Lithuanian church's history and is considered an unsuccessful example as far as conversion is concerned.

He did not have a strong enough rule to force all of his followers to convert to the new religion.

He was a skillful and determined ruler who knew how to engage in regional politics beyond Lithuania's borders and who was able to use the Teutonic Order to his own benefit.

He was a merciless and ambitious individual.

He sent his family members who were also his competitors at the time, to Russia allegedly to conquer Russian lands and resist Tatar attacks.

He raided the lands of the family members he sent into Russia.

When his wife died, he decided to marry her sister, though she was already married.

He planned to kill Daumantas, the husband of his future wife, but Daumantas and Treniotas united to kill Mindaugas instead.

At the time, behaviour like this by a ruler was common.

He did not leave any heirs behind who could continue his dynasty. His son Vaišvilkas took the throne briefly before also being murdered, after which his competitors fought for the throne.