Was Pushkin's great-grandfather baptised in Vilnius?

ldkistorija.lt
aA
In the historic part of Vilnius, on Didžioji Street, there stands the Orthodox Church of Saint Paraskeva, one of the finest examples of nineteenth-century Byzantine style architecture in the Lithuanian capital. 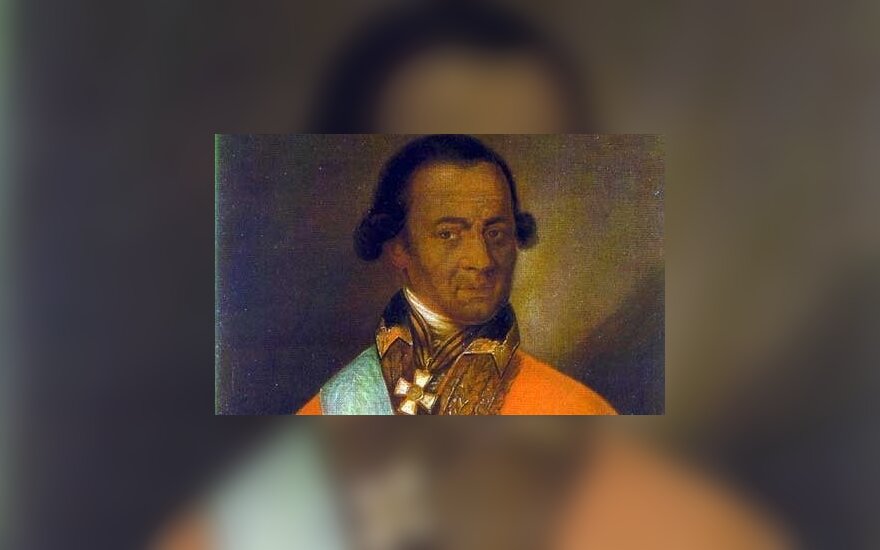 On its wall, there is a plaque saying that, in 1705, during the Northern War, Abram (Ibrahim) Hannibal was baptised here, the great grandfather of the Russian poet Alexander Pushkin.

In spring 2011, in the presence of Vilnius government officials, members of the intelligentsia, envoys of Russia and Belarus, a sculpture by the local artist Vytautas Nalivaika was unveiled outside the church, a monument to Alexander Pushkin and his great grandfather Abram Hannibal.

During the ceremony, Yury Kobrin, an aficionado of the history of the city, pronounced that those who have any doubts that Hannibal was in fact baptised in Vilnius should go and read some history books. No one among those present questioned the claim that they were standing at the site where, 300 years earlier, the famous African courtier of Peter the Great began his career in the court of Russia. Nor did any historians protest later. In Lithuania, it seems, this is taken as a historic fact. Historic evidence, however, is much thinner than one would imagine. 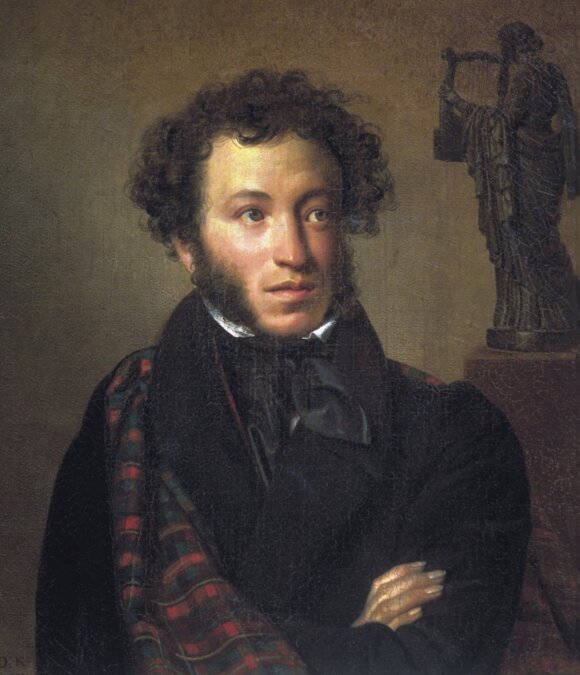 Who was Abram Hannibal? His origins are not quite clear. According to some sources, he was born in the late seventeenth century in Abyssinia (Ethiopia) in what is today part of Eritrea. He is said to have been a son of a local duke. Another version has Hannibal coming from the Logon Sultanate which used to cover present-day Cameroon and Chad.

Ibrahim and his brother were presumably kidnapped and taken as slaves to Constantinople where they were bought by Savva Raguzinski, a Russian diplomat. He sent Hannibal to the Russian emperor who was fond of exotic rarities. Peter the Great brought up Hannibal with his own children who would play and sleep in the same room.

Authors who later wrote about Hannibal did not consider his religion. Most people in Ethiopia and Eritrea were Orthodox Christians, although in Constantinople Hannibal could have adopted (or been forced to adopt) Islam.

After his baptism, Hannibal was given a Christian name, Abram. Until 1717, he was a valet to the emperor and was later sent to study artillery in Paris.

Abram Hannibal fought in the ranks of the army of Louis XV of France against the Spanish King Philip V and rose to the ranks of captain. In 1722, after graduating, he returned to Russia, taught mathematics and even wrote a geometry textbook. After the death of Peter the Great, he fell into disfavour of the emperor's de facto successor Alexander Menshikov and was exiled to Siberia close to the Chinese border.

While in Siberia, Hannibal would design fortresses and was military engineer. Thanks to his skill, he was allowed to return and in 1742-1752 he was appointed the superintendent of Reval (Tallinn). In 1731, he married his first wife, a Greek woman named Evdokia Dioper, but it was not a happy marriage. His second marriage, in 1736, was to an Estonian German woman, Christina Regina Siöberg, who bore him 10 or 11 children. 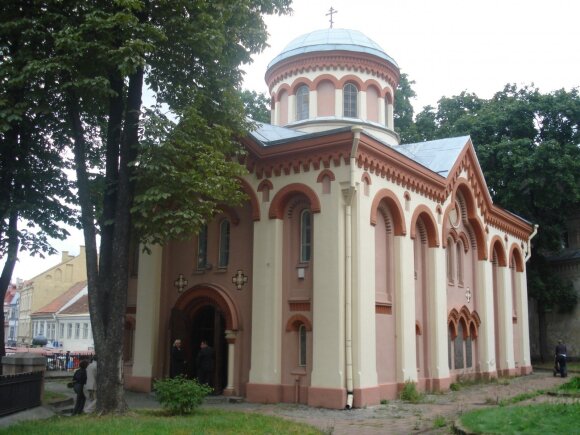 Their third son Osip had a daughter, Nadezhda Osipovna Hannibal, who was the mother of the celebrated Russian poet Alexander Pushkin.

Abram Hannibal retired in 1762 and, almost two decades later, in 1781, he passed away near Saint Petersburg. He was a man of many talents, but at the same time a fierce landlord whose cruelty forced many peasants to flee his lands.

How did the story about Hannibal's baptism in Vilnius begin? In his 1742 autobiography, Hannibal does not mention neither the exact date, nor the place of his baptism. In the dedication to the Empress of his textbook "Geometry and Fortification", he wrote that he had been baptised in Vilnius in 1705. However, there is another letter written by Hannibal where he claims that he was baptised in Moscow in 1706, soon after arriving from Constantinople.

The date is also ambiguous. Peter the Great was not in Vilnius in 1707, as Pushkin wrote in his family's history. The Russian emperor was in the Lithuanian capital between July 15 and August 1, 1705, and between January 26 and February 4, 1708. So Hannibal's baptism could have only happened in those years.

Pushkin wrote that the godparents of his great grandfather were Emperor Peter the Great and the Polish Queen Christiane Eberhardine, the wife of King Augustus II. But she could not have been in Vilnius at that time, because she was with her husband Augustus II in her palace in Saxony. Augustus II and the Tsar of Russia did not meet in Vilnius. Meanwhile in 1708, Peter the Great was busy with the defence of Grodno and could hardly have been distracted by the baptism ceremony. 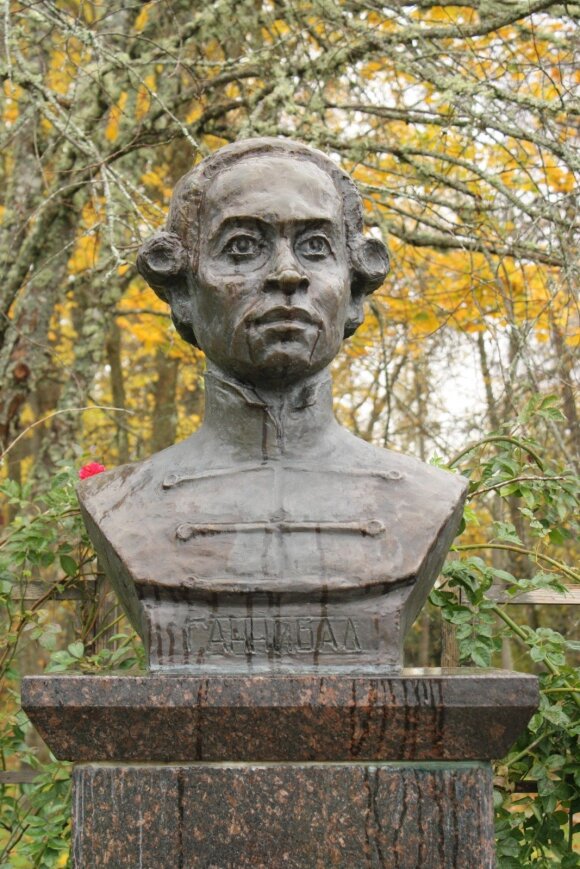 Most of what we have about Hannibal's baptism comes from the writings of his great grandson. Pushkin was a child of the romantic era, so he treated information about his ancestry as a source for poetry, not history. Alexander Pushkin was proud of his African ancestry. The biography he wrote about his great grandfather contains a number of unconfirmed facts. In Pushkin's other writings about his family, he says that his ancestors on his father's side were German warriors. There are no historic sources to confirm that.

Some historians believe that the old plaque on St. Paraskeva Church in Vilnius is a solid enough proof of Hannibal's baptism. However, it was put on the church centuries after the event. The church became what it looks today after a reconstruction in 1864, under General Governor Mikhail Muravyev. This is when the plaque was put on its wall.

Even without incontestable proof, the story about Hannibal's baptism in Vilnius became popularised in the second half of the nineteenth century. It is mentioned in the Vilnius Guide published in 1864 in Russian. Other city guides later repeated the supposition as fact, including the 1937 travel guide by Adomas Juškevičius and Juozas Maceika. Soviet-era guides also described Vilnius as the place where Hannibal was baptised.

However, there are no incontestable sources to confirm the story. Further research in the archives of the Great Northern War in Russia and Saxony could help clarify whether Hannibal's baptism in Vilnius is a fact or a legend. But that remains to be seen.

A crypt has been found at St. Varvara's Chapel in Vilnius, which is part of the Markuciai Manor...