Vilnius plans to commemorate Great Synagogue by 2023 after important discovery

(1)
BNS
aA
Archeologists have found one of the most important parts of the Great Synagogue of Vilnius, the bimah – a raised central platform for Torah readings, the Jewish Community of Lithuania said on Thursday. 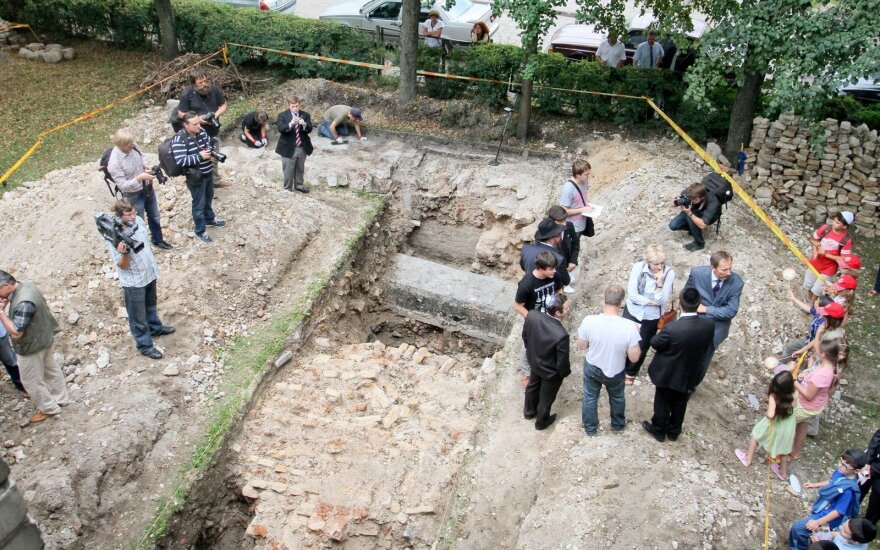 Remnants of the Great Synagogue of Vilnius
© DELFI / Šarūnas Mažeika

Installed in the XVIII century, the green-grown Baroque-style Bimah was found under a former school which was built by the Soviets on top of the demolished synagogue in the 50s.

Following this discovery, Vilnius authorities pledged to demolish the school building in a couple of years and properly commemorate the synagogue by 2023.

The bimah was found by an international team of experts from Lithuania, Israel and the United States.

"We have found the bimah, the central prayer platform which was in Tuscan Baroque style. It was one of the central features of the synagogue," Israeli archeologist Jon Seligman, leading the research work, told BNS Lithuania. "It is really a very exciting development. When we talk about the presentation of the site to the public in the future, this will be one of the central features of the display that will be shown to the public."

The two-step Baroque-style Bimah had four Tuscany-style and eight Corinthian-style columns, and parts of these columns were also found during the excavation work.

Earlier, the archeologists also uncovered parts of the mikveh, or ritual bath, complex on the northern side of the site. Digging revealed multi-colored floor tiles and green oven tiles. It is believed to be a male mikveh based on historical documents.

The Great Synagogue of Vilnius was one of the most important Jewish centers from the late XVI century until WWII, often called "Northern Jerusalem" due to its significance to the Jewish culture.

The Great Synagogue of Vilnius was built in 1633 on the foundations of an older 16th-century synagogue. The Nazis burnt the synagogue, and its remains were flattened and a two-story kindergarten was built on top of it in the 1950s, which later housed a school.

"It's not only an archeological discovery. It will help to better understand the history of Lithuanian Jews, the ideology of both the Nazi and Soviet regimes, and how fast you can destroy everything," Faina Kukliansky, chairwoman of the Jewish Community of Lithuania, told BNS Lithuania.

Research work at the synagogue has been taking place since 2011 is partly-funded by a good-will foundation where Lithuania transfers compensation for nationalized assets of Jewish religious communities.

Lithuania has been holding discussions for several years now on how to commemorate the synagogue, with proposals ranging from exhibiting uncovered fragments under a glass to rebuilding the synagogue and opening a museum.

The school building was vacated last year, and now Vilnius authorities plan to demolish it in a few years but until then they plan to lease the building for creative workshops.

Vilnius Mayor Remigijus Šimašius says the synagogue will be commemorated over the next five years by 2023 when Vilnius will mark its 700th jubilee.

"We'll look for practical forms of expression during architectural workshops. The archeological research helps to understand how much of it has remained. It creates serious conditions for showing to the public the bimah, the columns, the flooring, the walls," the Vilnius mayor said. "We can have a great picture of our history. The goal is to this happen by the 700th jubilee of Vilnius."

There were over 150 synagogues in Vilnius before WWII. Almost the whole Jewish community in Vilnius was annihilated during the Holocaust when the Nazis occupied Lithuania. Now there's only one synagogue in the Lithuanian capital.

Simonas Gurevičius, chairman of the Jewish Community of Vilnius, said he could not hold his tears when he prayed near the discovered bimah.

"I probably was the first person to pray there after 77 years when the last payers of martyrs from the small ghetto of Vilnius were heard," he told BNS Lithuania. "It was an opportunity for me and my children already to, for at least a moment, feel the glory of "Northern Jerusalem", and continue the century-old tradition that is still alive despite the Nazis and Soviets' attempts to destroy it."

Archeologist have found one of the most important parts of the Great Synagogue of Vilnius , the bimah...

An archeologist from Israel will on Wednesday present the latest findings in the territory of the...

A team of archeologists returning to research the complex of the Great Synagogue of Vilnius for a...