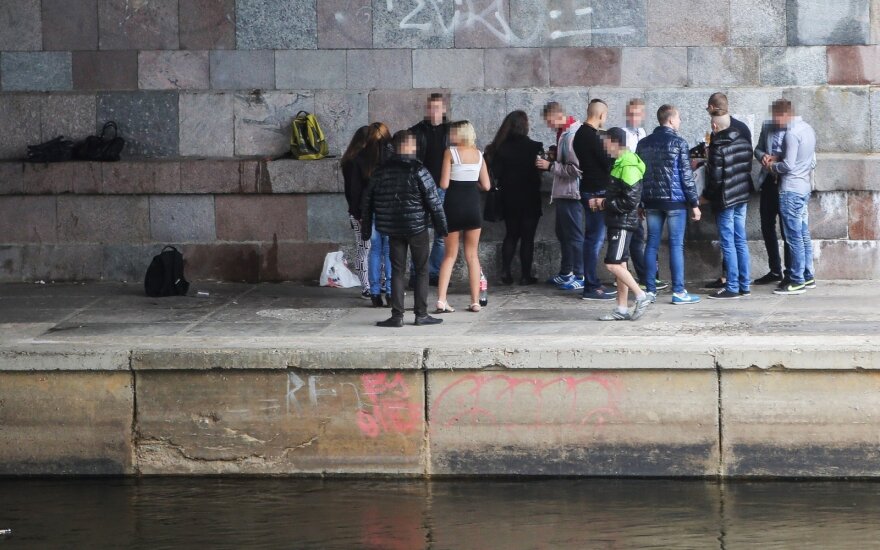 The city authorities signed a memorandum in late April 2016, setting out a long-term plan to combat alcoholism and drug use among Vilnius youngsters.

Paluckas explained to the Lithuania Tribune that the anti-substance abuse measures will be implemented over the course of the coming decade, and will be funded by the city.

“The main goal of the memorandum is to develop a comprehensive and effective anti-substance abuse programme for Vilnius city,” he told The Lithuania Tribune. “The network of extra-curricular activities [to combat the issue] is still under development and will continue for the coming decade.

“The programme will be implemented through schools, youth days, sports centres, and information will be made available to families.”

Paluckas said that the initiative will be targeted at “youngsters from lower-income families who have a lack of education opportunities and in many cases, an addiction to alcohol, narcotics and tobacco.”

A 2014 report published by the World Health Organisation suggested that Lithuania was a leading European nation in terms of alcohol use among 12-15 year olds.

Paluckas added that “the cherry on the cake” is the WHO’s statistics from the same report that outline Lithuania leads the rankings of alcohol consumption in Europe.

“Alcohol consumption is widespread in Lithuania’s society,” he said. “In my opinion, it comes from the family’s and society’s tolerance towards alcohol consumption. Everyone seems to understand drinkers, [explaining their problems by] difficult social circumstances - partly and sadly, this is true.

“Some psychologists suggest that there are three types of suicide: the physical one, emigration, then alcoholism. Some young people simply fail to cope with the challenges that life brings to them, so they start looking for shelter in the bottle.”

When asked whether boredom amongst Vilnius’ youth population is a key factor in substance abuse, Paluckas responded: “I don’t think young people are bored here.

“On the contrary, Vilnius can offer a very rich cultural life, but in my view, the abundance of opportunities - as well as the lack of them - are a contributing factor in the problem, but not the cause of the problem itself.”

Paluckas believes that straightforward restrictions on alcohol sales, as proposed by some politicians, is not the right way to combat alcohol abuse.

“My plan tries to cope with the whole picture - prevention, abuse, rehabilitation and re-integration,” he said. “Restricting accessibility to alcohol is one of the most effective ways to fight the alcohol abuse problem.

“I am not talking about prohibition, because it is simply not possible and could boost the illegal trade of alcohol.

“We plan to analyse the availability of sites were alcohol can be purchased near schools and youth centres and we will pay special attention to these areas.

“We will also build mobile groups of social workers, child rights specialists and public order officers to patrol school premises and public spaces to prevent young people from using alcohol there, and explain the potential harm that they face in doing this.”

Paluckas feels that “fighting substance is one of the hardest tasks one can imagine” and the majority of the project’s measures have been met with hostility from parts of society who view alcoholism as a lifestyle choice, rather than an illness.

“This will require a lot of effort and political will,” he continued. “In fact, most of this policy’s measures are not very popular with the rest of the society because it requires funding that could be spent on other projects rather than helping alcoholics - some people truly believe that drinking is a personal choice rather than an illness.

“This is why I see this project as a serious challenge.”

The project will also be implemented in two other Lithuanian cities - Kaunas and Klaipėda - with the assistance of a number of non-governmental organisations.

“Teaming up with Kaunas and Klaipėda could be considered as building a 'grand coalition' to fight our society’s drinking problem,” Paluckas concluded. “It is important to have this kind of political influence, because sometimes the opinions of different cities and ministries are divided on how to tackle this issue.”

A group of activists on Monday submitted more than 61,000 signatures in support of a legislative...

Vilnius to join forces with Latvia, Estonian cities in tackling alcohol use

Vilnius plans to sign a memorandum with Latvian and Estonian cities to cooperate on joint...

Number of alcohol selling points may be slashed in half, says health minister

Minister of Health Juras Požėla discussed some of the changes to alcohol laws that the Ministry...

The Lithuanian government has endorsed an action plan for 2016 to reduce alcohol consumption in the...