BNS EN
aA
The thunderstorm that ripped through Lithuania on Tuesday night and early hours of Wednesday caused substantial damage across the country, flooding cellars, rupturing a gas pipeline and interrupting traffic for a few hours on some streets due to massive rainfall. Bottom levels of some largest malls in Vilnius were also flooded. 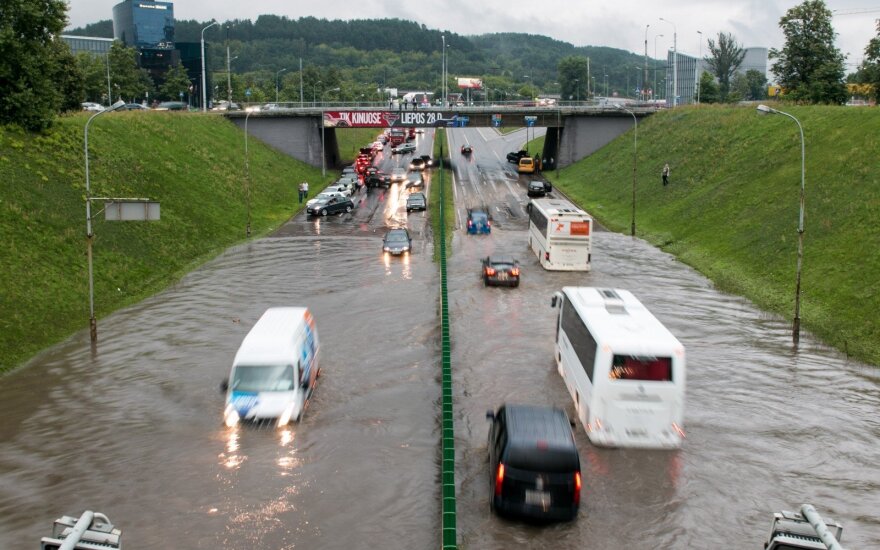 The downpour left a few thousand households powerless, with the electricity outage still being repaired on Wednesday morning.

According to information provided by fire-and-rescue services, the rupture of a gas pipeline by lightning was reported in Utena (eastern Lithuania) at 8:28 p.m. (local time), causing minor gas leak and fire.

The fire-and-rescue services fenced off the territory until the arrival of the gas repairs service.

Flooding of hospital cellars in Širvintos, central Lithuania, was reported at 8 p.m., electricity supplies were subsequently cut off for water removal. Širvintos Mayor Živilė Pinskuvienė said the situation in the city was catastrophic.

In her words, the worst situation is in the district hospital, which is considering evacuation of patients. The municipality's archives have also been flooded and out of electricity.

Pumping facilities in the Lithuanian power plant were flooded, according to a report received at 9:35 p.m. Fire-and-rescue services removed the water.

Weather services told BNS that 45 mm of precipitation was reported in Vilnius on Tuesday evening and early hours of Wednesday, which is less than during the last heavy rainfall in late June when the rainfall was 55 mm.

The heaviest rainfall on Tuesday and Wednesday was in Elektrėnai, with the rainfall reaching catastrophic level of 80 mm. The precipitation level in Trakai and Molėtai was torrential at 78 mm and 54 mm, respectively.

Many Lithuanians woke up this morning to a sever rain, bright and loud thunderstorms. According to the...

Lithuania in for a few hot days with T-storms, squalls

Lithuania is in for a spell of hot and rainy weather with thunderstorms and a chance of squalls, the...

Renovation of wastewater system to save Vilnius from flooding – Vilnius mayor

Vilnius will be safe from flooding after renovation of the wastewater system – the work has...