BNS
aA
Thousands of people took part in a festive parade as Lithuania marked the 25th anniversary of its independence restoration on Wednesday. 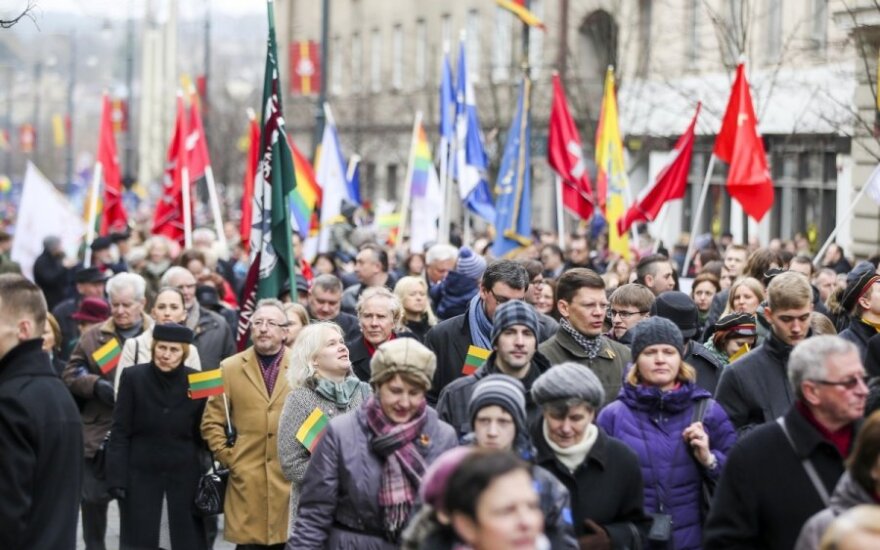 Following the hoisting of the flags of the three Baltic states outside the Seimas of Lithuania, over 4,000 people, accompanied by a military orchestra, marched through Gediminas Avenue from the Seimas building to the Cathedral Square, with many people wearing national symbols and carrying the flags of Lithuania, Latvia, Estonia, Ukraine and Poland.

"It's a special day for me as it’s my Lithuania here, it’s my homeland. I'm so glad to see so many people," pensioner Stanislava Galadildienė, who joined the crowd, told BNS.

"We are sending the biggest message not only to the world but to ourselves as well as we live in the times of such rapid changes. Last year, I came here to support the Maidan. The attitude of all people in Lithuania has changed," Almantas Abromaitis, 26, another participant of the march, said, having in mind the events in Ukraine.

The participants celebrated unity and there were no nationalist chants "Lithuania for Lithuanians" which would probably be heard during another controversial march planned later in the day.

During a solemn parliament sitting before the march earlier on Wednesday, Lithuania' leaders stressed the importance of unity in the wake of new threats, having in mind concern over Russia which the West accuse of inciting unrest in Ukraine.

"The great power of unity of those years has become a legend. We need the same unity today, a quarter of a century later. When the rattling of arms is heard again from the same direction. When firearms are used to stifle the voice of freedom. When not only the outside forces, but those inside too try to divide, to belittle and to fade the light of freedom. We will be as strong as we are united," Lithuanian President Dalia Grybauskaitė said during the sitting.

Lithuania 's first post-independence leader Vytautas Landsbergis also spoke about the threat posed by "the empire", without directly mentioning Russia. He called on people to get prepared for defense instead of relying on "scared European friends."

"If the madmen's aggression is unstoppable and the empire is going back to its former colonies, our success story might became a story of temporary success that will be turned into ashes, and scared European friends will even advice not to put up resistance to the attacker as probably, they will say, there are more important things in the world then freedom and justice. But in the beginning and always, we are those who have something to say. We must get prepared for defending our grey-haired father, beloved grandmother and little sister," Landsbergis said.

"We paid a heavy price for our freedom but we must always be prepared to pay that price. Today, the international situation, especially in our region, is raising major concern. We must remain vigil and believe in our country," Speaker of the Saeima of Latvia Inara Murniece said during the flag-hoisting ceremony.

March 11 events are also being held in Lithuania's other cities. In the evening, festive concerts will take place in Vilnius, Kaunas and Klaipeda.

On March 11, 1990, Lithuania's Supreme Council (later renamed the Reconstitutent Seimas), lead by Landsbergis, adopted the Act on the Re-establishment of the State of Lithuania, making Lithuania the first Soviet republic that split from Moscow. The move made a significant contribution to the collapse of the Soviet Union and the whole communist system.