Daiva Repečkaitė, LT Daily
aA
“Sometimes I think, how come we weren't a least bit afraid – even for my husband, who was a Soviet army conscript at the time?” Odeta Barkauskienė, a factory worker at the time of the turbulent events of January 1991, remembers her spontaneous decision to join civil guards of a broadcasting station near Kaunas. 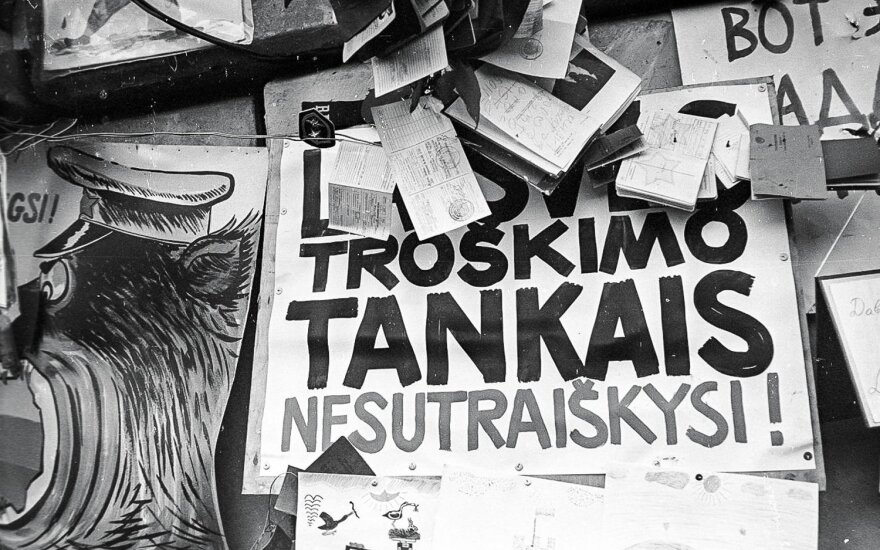 That day her in-laws took her two-year-old daughter to their village, allowing her to hop on one of the free buses and join crowds of other Kaunas residents in their vigil against potential military aggression at key communication hubs. Although most of the commemorations are concentrated in Vilnius, residents of Kaunas still remember how crucial their city was for spreading the news about the attempted coup, as well as informing and organizing citizens. Some say that on January 13 Kaunas became the temporary capital again.

The days before the attempted coup were tense. The Soviet government in Moscow declared an economic embargo on newly independent Lithuania. Fuel and food were in short supply. In the early days of the new year, following a command from Soviet defence minister Dmitry Yazov, the Pskov division of professional soldiers was sent to Lithuania to crack down on the resistance of Baltic men to conscription to the Soviet army. Already on January 11, Soviet soldiers entered Kaunas and occupied several strategic buildings.

People quickly volunteered to collect and spread the news to the newborn independent government, but soon their determination would be put to a more severe test.

Around the patriotic narrative, taught at schools and on the media, there are various personal stories, waiting to be remembered. “Those people who organized everything, made sandwiches, transported people or went to Vilnius – who needs them now?”

Algirdas Žeižys, who worked for the first post-Soviet elected municipal government in Kaunas, recalls how he and other budding administrators from Sąjūdis (the independence movement) learned to act in an emergency on the job.

The strategy of the coup was to take over means of communication, government buildings and key transportation hubs. Observing the military build-up, the independent government designed counter-measures. According to an eyewitness, interviewed by Kauno diena in 2008, there was a plan to set up resistance headquarters in the premises of Kaunas University of Medicine (now Kaunas University of Health Sciences) and broadcast vital news using an antenna on the university clinic's chimney. Due to the presence of Kaunas University of Technology (KTU) and various technological enterprises, Kaunas had a pool of creative engineers. Local engineers and volunteers built several emergency radio transmitters in Kaunas, including one inside Kaunas municipality.

KTU had one of the most powerful shortwave radio transmitters in Lithuania at the time, and it was immediately summoned to spread the message to the world in several languages. Amateur radio enthusiasts sent messages abroad to the Red Cross, foreign media and fellow enthusiasts abroad. These volunteers also planned emergency communication, translated the news for foreign reporters, received signals from Kaunas and spread them elsewhere using their own or their employers' radio transmitters.

The local TV and radio station was based in the city centre, on Daukanto street. A television centre on Vaižganto street was used for cable TV transmissions – this proved immensely useful for Lithuanian and foreign correspondents alike. The cables were enough to reach Tallinn and other countries.

According to detailed minutes written by Stasys Paškevičius at the Supreme Council in Vilnius, elected representatives in Vilnius were informed at around 5am that the radio in Kaunas was broadcasting in three languages and calling on foreign countries to support Lithuania. Birutė Nedzinskienė, a Supreme Council member and secretary of the sitting, had been informed that Kaunas municipality received threats to be called to military court if it did not stop broadcasting. But Kaunas was not ready to give up.

Kaunas had two pivotal broadcasting facilities: for radio, based in Juragiai, south-west of Kaunas, and for TV and radio re-broadcasting, located in Sitkūnai, north-west of Kaunas. Residents organized themselves to guard each of these key communication hubs, using free buses, departing from the former Kaunas cinema. The municipality ensured there was a bus service to take them there.

“I was on duty that Saturday. Saulius Gricius [deputy mayor at the time, one of the leaders of Lithuanian greens] called me, saying, “Where did taxi drivers disappear? Find them!”

The taxi company had three drivers with portable communication devices. It turned out that one was taken from the corner of Gedimino and Miško streets – his car was left there, but without the driver. We had no idea where he was. We found the second car close to the station – also without the driver. The third one was taken in Panemunė neighbourhood, and until 7pm we didn't know where they were. They were summoned by the military so that they could not report to the centre with their portable devices,” said Žeižys, the former municipality administrator.

Finding taxi drivers was not his only task. He also got a call from a resident who volunteered to make hundreds of sandwiches for people stuck in transportation hubs, the railway station and Karmėlava airport.

“'How do you get products?' I asked her. 'Shop managers give me butter and other things,' she explained.”

“Someone took the responsibility of organizing security [in Sitkūnai]. They asked who knows how to use guns. I had learned my military training well and even represented my school at competitions. So I received a Kalashnikov. Others got gas masks. Fires around the building, grannies bringing sandwiches – even cepelinai appeared. Of course, there were songs and tea,” these are the memories of Nomeda Mašiotaitė, an art academy student at the time.

“Later I signed up to be a national defence volunteer and guarded the Seimas. But it involved simply sitting around for several hours with a different man each time, and they tried to hit on me. Perhaps I seemed crazy and looked like Sinead O'Connor or Patricia Kaas. One short guy would call me Patricia and throw a ball at me – the nation did not need more from me,” she remembers.

Witness testimony from Ona Bagdonienė, who worked for the police in Babtai (a town near Sitkūnai), indicates that many police officers were called to Sitkūnai, and the remaining ones helped organize transportation of agricultural vehicles to the broadcasting station in case it needed defending against tanks. Volunteers from surrounding farms and catering companies brought tea and sandwiches. Engineers, students and employees of the Lithuanian Academy of Agricultural Sciences at the time also discussed how to divide themselves among strategic points; some volunteers donated cameras and TV sets to Juragiai broadcasting station.

Trucks, tractors, cars and live chains surrounded these facilities to protect them from military attacks. “We had long discussed the news at work. Even functionaries 'converted' to support independence. My husband's stepfather is Russian, he wasn't born here, but he supported Lithuanian independence and hurried to learn Lithuanian as the independence movement started,” Barkauskienė said.

According to Vytautas Kamblevičius, who worked for the municipality of Kaunas region at the time and was in charge of guarding Sitkūnai broadcasting station, local officials made sure that strategic buildings and points were supplied with concrete blocks for barricades, and agricultural machines, supported by live chains of people, who took shifts to guard broadcasting facilities round the clock.

Petras Makutėnas, who was in charge of defence at Juragiai, remembers that one task was to avoid spontaneous, potentially destructive actions of passionate local volunteers. He worked to make sure that people did not provoke the military or block residents' vehicles on the way to Juragiai. His team also installed metal bars at Juragiai broadcasting station and made a secret entrance, where only those who knew the password could enter.

Taxi and ambulance drivers were mobilized for passing messages and ensuring communication, as they could communicate with each other using portable radio transmitters. Citizens informed local authorities of any movements of the military they had detected.

The municipality prioritized Juragiai over Sitkūnai, according to Žeižys. “Also, the most important thing was to keep the electricity bridge in our hands, because signals from the TV station here in Kaunas would reach Juragiai under Aleksotas Bridge.”

As soon as soldiers broke into broadcasting facilities in Vilnius in the middle of that fearful night, journalists and technical staff in Kaunas got ready, and TV broadcasting resumed – from Kaunas – 20 minutes after it was cut off in Vilnius.

Journalists Jolanta Šarpnickienė and Dzintra Varžgalienė in Sitkūnai, Modestas Patašius, Vidas Mačiulis and others in Juragiai were ready to take over the responsibilities seized from their colleagues in Vilnius. Before broadcasting to all radios and TVs in Lithuania could be ensured, engineer Algirdas Vidmontas addressed the audience, encouraging everybody to stay tuned. The signal from Juragiai could reach as far as Poland, providing a vital link to the outside world.

“We stayed on duty all night, and the last call we made was at 12:30 at night on the government line, to the Lithuanian TV. ‘Lithuanian Soviet TV is listening,' a voice answered. We told him to go to hell and the line was cut off,” said Žeižys, whose staff also had to make sure that journalists from Vilnius were safely accommodated in Kaunas hotels following transfer from Vilnius. Lithuanian TV stopped broadcasting from the capital city at 2:10 AM.

A radio relay station on Vaižganto street was another important link to the outside world, as it could access satellites and had previously been used for blocking anti-Soviet broadcasting from the West. According to Lietuvos rytas, lists of volunteers, called on to guard this facility, were kept top-secret. Over a dozen men, who risked their lives there, have not received any official recognition to this day.

Many ask why the Soviet military did not attack communication hubs in Kaunas. Local officials remember that they and Soviet soldiers agreed in advance to avoid unnecessary provocations and casualties.

Barkauskienė has fond memories of solidarity and outstanding level of coordination at Sitkūnai. “There was tea, even cigarettes (those long ones, without a filter, which we called 'spaghetti' as they could be cut into pieces), sandwiches with egg and smoked lard. Clearly, people brought these products from local markets, since these were in short supply in shops. There was an embargo at the time.”

This was a chance to ask her how she and her friends felt about the constant shortage of goods and the Lithuanian government's decision to raise food prices – Lithuanian Communist Party activists and the Soviet military had used this as an excuse to stir unrest and activate the 'national salvation committee'.

“People supported the independent government despite the price increases. We wanted to get out of this fenced 'family' at all costs. I work at a library now – I prefer to get lower pay but be free,” Barkauskienė said.

To celebrate the 25th anniversary of the events of January 13th, 1991, a commemorative international...