Telia will launch exclusive HBO® content in Lithuania on August 21

EN.DELFI
aA
From August 21 all subscribers of Telia Smart TV will be able to watch over a hundred prominent, award-winning and critically acclaimed films and series from the American premium pay TV network HBO. New content will automatically be added to the service when it premieres, a press release from Telia states. 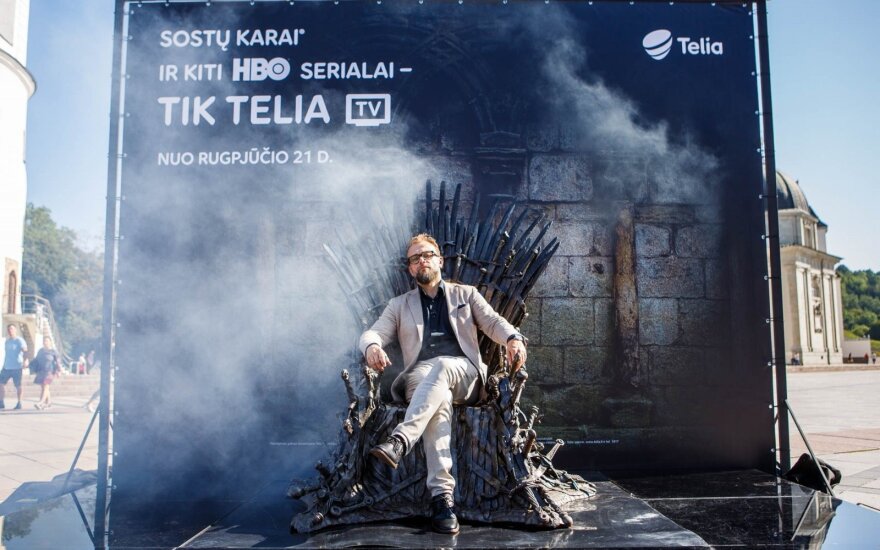 If you found yourself in the Cathedral Square in Vilnius this morning, you probably noticed the beautiful iron throne from the popular HBO series Game of Thrones®. During this day, residents and visitors of Vilnius can try to sit in the throne and get a sense of how it feels to rule the world. Lithuanians will soon be able to "rule" over some high-quality content as well, when Telia Smart TV from August 21 will offer HBO programming, featuring series such as Game of Thrones, Westworld® and the legendary The Sopranos®, to its subscribers.

Hervé Payan, CEO HBO Europe is pleased that Lithuanians now finally can get access to the many iconic HBO series: "As a result of a very successful collaboration with Telia, we are happy to offer our huge portfolio of library and brand-new HBO titles to the many Lithuanians fans of top end TV programming", he said.

Related articles
The intrigue of The Walking Dead season 9: who will be the new leader?
HBO project in Lithuania of outstanding volume - head of Film Center

"The world is witnessing a new TV content era with record-breaking quality and budgets of the series, which these days also includes the biggest stars from Hollywood on both sides of the camera. At the same time TV viewing trends are changing: people have a choice of whether to wait for a new episode or to view the entire season at once (binge-watching). In response to these developments, we are bringing the most popular and up-to-date content to our customers' homes. We are the first to offer video-on-demand within the smart TV platform and the addition of HBO content will truly make us leaders of top level content in Lithuania", Haval van Drumpt, head of the private client services at Telia, said.

Telia Smart TV viewers will be the first to watch new episodes of the latest HBO series including all previous released seasons and episodes. Obviously, this also includes the latest HBO hits, such as the fantasy phenomenon Game of Thrones, drama series like Westworld, Sharp Objects® and Big Little Lies® as well as acclaimed comedy series like Veep®, Girls®, Ballers® and Silicon Valley®.

In the huge collection of HBO content Lithuanians will also get access to iconic classic titles such as The Sopranos, Six Feet Under®, The Wire®, True Blood®, and Entourage®. In total more than a hundred carefully selected films and series and all their previous seasons will be available from the launch date, while new content automatically is added.

All HBO films and series will be offered with Lithuanian subtitles to Telia customers with the choice of the original language (English) or the Russian voice-over.

"Films and series must be of the highest quality and available to viewers when they find it convenient. This is now all part of what Telia Smart TV offers to its viewers. The rapidly growing popularity of video-on-demand shows that Lithuanians wish to watch quality content and to do it legally. That's why we continuously seek to offer more interesting content to viewers with different taste and preferences', Haval van Drumpt said.

Customers of Telia Smart TV will be able to order the new HBO service from August 21 at 6.9 EUR/month. Viewing in the first month will be free of charge.

Telia Smart TV also broadcasts on 4G mobile, so it is available throughout Lithuania; currently the first month at the beginning of subscription is free of charge.

HBO® is one of the most respected and innovative entertainment brands in the world, serving iconic, award-winning programming to 142 million subscribers globally. A subsidiary of WarnerMedia, HBO is the world's most successful pay TV service with an extensive array of programming that includes some of the most notable titles to be on television including Game of Thrones®, Big Little Lies®, Westworld®, The Sopranos®, Band of Brothers®, and The Wire®. In the United States, HBO® and sister network Cinemax® are available across multiple platforms including HBO On Demand®, Cinemax On Demand®, HBO GO® and MAX GO®, as well as HBO NOW®. Internationally, HBO branded services, including television networks and the standalone streaming product HBO GO®, are available in more than 70 countries across Asia, Europe, Latin America and the Caribbean. HBO and Cinemax programming is also sold into more than 150 countries worldwide.