Ruslanas Iržikevičius | the Lithuania Tribune
aA
Tristram Perry, Public Affairs Officer at the United States Embassy in Kazakhstan, insists that social media can be an effective tool in the hands of state institutions, yet one that requires understanding and discipline to use. "I think social media is sometimes seen as a magic bullet, but it is not one," he tells the Lithuania Tribune. "It is one tool of many, which has to be chosen wisely since you cannot nail a nail with a shoe." 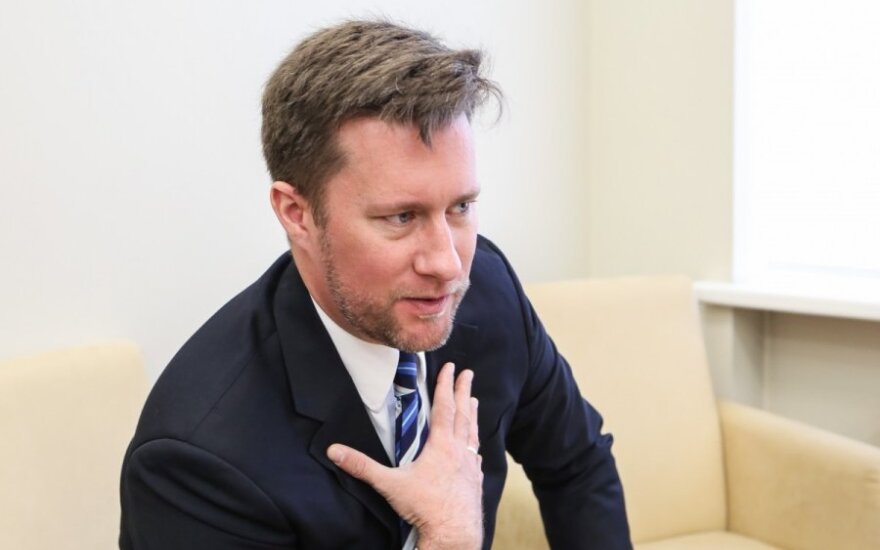 Tristram Perry was invited to give an address at the annual summit of Lithuanian ambassadors in Vilnius last week. There are some social media superstars among them, he says, though others still need time to domesticate the platforms that have not even been there five years ago.

In your opinion, which government, besides your own, uses social media channels most efficiently?

How do Lithuanian institutions look in that context?

Well, I think Lithuania is in the middle of the pack. You have some superstars, who are out there, like (Lithuanias Ambassador in the US) Žygimantas Pavilionis, who is doing some great stuff. There are other people who will probably become more comfortable with social media as time goes on. That is not a bad thing, because five years ago nobody was doing that. Institutions more than individuals are having some hard time grasping how to use social media, and are just starting to find their own ways online.

One of the purposes of your visit to Lithuania was to deliver a speech at the annual meeting of the Lithuanian ambassadors. What was your message?

It was not “one of”, it was my main purpose for coming, and my message was “use it!” I was encouraging them to use social media, showed some mistakes I had made, and showed all the things that are good about it, how to be effective, and how to avoid the mistakes that I had made.

It was a closed session and I do not want to go into the exact details, but the questions were insightful, which meant that people were using social media. I wish I had more time to spend with your ambassadors – they were intelligent and had a lot of interesting insights. One best question was what my biggest mistakes were. As I said earlier, I made many mistakes, but reliance on one platform over the other is something that I could have done differently. It is good not to stick to one platform like Facebook or Twitter and to get your messages out on all of them.

Carl Bildt, the Swedish Minister of Foreign Affairs, how does he do that?

He is a genius. He does it all himself. I could not believe this myself, so I asked my Swedish colleague, who confirmed that. He does three or four tweets a day and one blog post every day. He has discipline, but do you know why he is good at it? He has been practising it – he has done that over and over again. Practice makes everything perfect, especially social media.

Could you name any most effective social media campaigns, apart your government’s?

Sure, allow me to make one highlight – that is “United For Ukraine”. This campaign was widely successful both in its results and its process. It brought together different countries working towards the same goal and it got about 100 million impressions and reached 40 million different people. That is a success by any measure. I think this campaign is one of the most successful and might be well-known by your audience.

How can one make a social media campaign successful?

Before you measure success, you need to set goals. If you do not set goals, you are just flapping around, and doing just to do it, which is a mistake. You have to answer to yourself what is it that you are trying to get done; do you even need social media? I think social media is sometimes seen as a magic bullet, but it is not one. It is one tool of many, which has to be chosen wisely since you cannot nail a nail with a shoe. Therefore, when you have your goals and choose your tools, we can measure your success or your failure.

Which social media platform is the most effective for a state institution?

It depends. I work in Kazakhstan, where Facebook and Twitter are nowhere near No 1. There are other less known social media platforms. Therefore, it is the way in which you use social media which is important. You have to make it more attractive, more interactive, more user- and content-driven. The chosen tools depend on the market – for instance, Facebook and Twitter do not exist in China, and you have to use something else. As effective as they can be here in Lithuania, a Facebook nation as they’ve told me, they would not be effective in China. You have to know your media market as well as the goal you are trying to accomplish.

Some say that you do not exist if you are not on the Internet. Can you say the same about social media?

Well, I existed before there was Internet; I do not think that is true. Every new form of media, whether it is the telegraph, the radio or the television, has diminished old media. But most of them are still here and I do not think social media is going to end this civilization. But look at how people are consuming media. It is easier, more effective and more efficient. I could read ten newspapers, or I could get an app on my iPad and swipe through them. Things simply become easier. Therefore, I think that more and more things will become digital in the future.