BNS
aA
Hatred coming from Russia's current authorities toward Adolfas Ramanauskas-Vanagas only proves his significance and merits for the nation's freedom, Lithuania's leaders said on Friday as they paid tribute to the partisan commander. 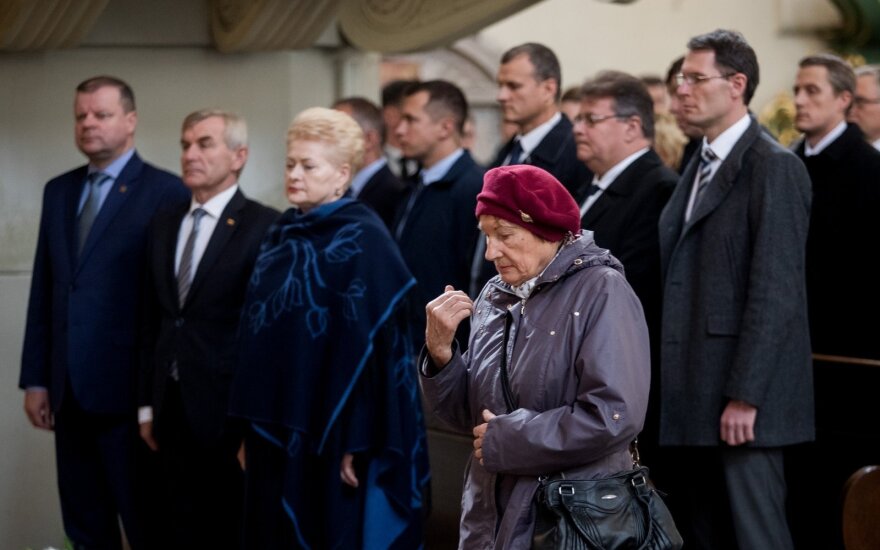 President Dalia Grybauskaitė said Ramanauskas-Vanagas had been "the most hateful person" for the Soviet occupation authorities and that deep hatred had lasted "up to the present time".

"We can see outbursts of this hatred even in present-day Russia, aimed at us, a free, democratic and independent nation. This proves once again that even a single person can be so important in the history of the state and do so much," Grybauskaitė told reporters.

"This only proves once again that we are burying our hero, a symbol of our freedom," she added.

Skvernelis said Moscow's statements showed that he had played a special role in the armed anti-Soviet resistance.

Maria Zakharova, spokeswoman for the Russian Foreign Ministry, on Thursday described as "cynical" Lithuanian authorities' decision to hold a state funeral for the partisan commander.

"Particularly cynical is the fact that the grave of Ramanauskas, who is to blame for the deaths of many civilians, will be located close to the gravesite of over 5,000 Soviet soldiers who died while liberating Vilnius from the Nazis," she said in a briefing.

"This shows that that state never changes or does not change for the better. It's regrettable," Skvernelis said, commenting on the spokeswoman's statement.

Lithuania is a democratic and prosperous state, which is "apparently very unpleasant for those who never wanted to see such a Lithuania", he added.

Viktoras Pranckietis, the speaker of the Seimas, said he was not surprised by Moscow's statements.

"We couldn't expect something good from them throughout the occupation period and now with an information war going on, could we?" he asked rhetorically.

Ramanauskas-Vanagas, the commander of the Dzūkija partisan region in southern Lithuania, was among the partisan leaders who signed the Union of Lithuanian Freedom Fighters' Declaration in 1949.

Ramanauskas-Vanagas was arrested and brutally tortured by the Soviets in 1956 and executed a year later.

The partisan commander's remains were found in the capital's Našaičių (Orphans) Cemetery earlier this year.

His flag-draped coffin was laid in state in Vilnius University Saint Johns' Church on Friday ahead of his state funeral in the capital's Antakalnis Cemetery on Saturday afternoon.

Vilnius is hosting a solemn state funeral for Adolfas Ramanauskas-Vanagas , a Lithuanian armed...

Archeologists have found the remains of Lithuanian partisan Albinas Ivanauskas at the Orphans'...