The Lithuania Tribune, BNS
aA
A rally organized in Vilnius this Saturday called for solidarity with refugees from war-stricken zones in the Middle East, while a similarly-sized counter-rally voiced concerns about a "clash of cultures" and security. 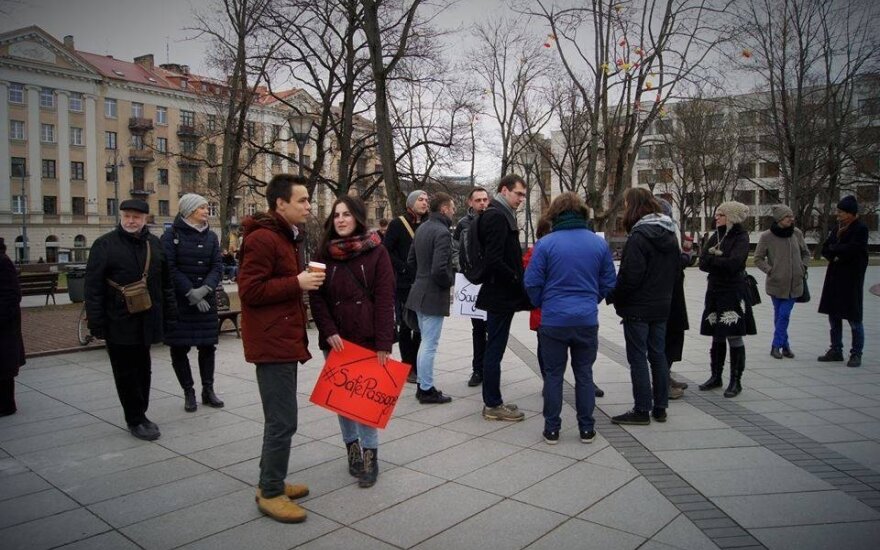 Lithuanians must show solidarity with people fleeing war zones in Syria and the Middle East, said equal opportunities activist Margarita Jankauskaitė who was among about 15 people who came to the refugee support rally on Saturday.

She dismissed anti-refugee sentiments in the country, saying they are based on racism and not genuine security concerns.

"These [anti-refugee] protest rallies are not reactions to the government's failure to do something, to dangers we are facing; they happen because there is much racism and intolerance in our society," Jankauskaitė said.

Related articles
Lithuanian truckers hit by losses from illegal migrants
Refugees being used as a weapon of war by Russia, says Minister Linkevičius

She said that security concerns get only raised in relation to migrants from the Middle East, but not from Russia and Ukraine.

"There is a lot of scare-mongering. Why are we not concerned about them [terrorists] coming from the other side [Russia], there can be terrorists and people hostile to Lithuania coming from there. However, we don't make a big deal out of it, because we realize that there are institutions responsible for screening everyone coming to our country," Jankauskaitė said.

Another participant of the rally, Justas Karsakovas, a student from Kaunas, said he had just returned from Slovenia, one of the transit countries for migrants coming to Europe.

He said that Lithuanian fears of refugees are unfounded and fueled by racism and prejudice. "As if Islam were a monolith religion and all Muslim were the same," he said.

"I don't see any reason why we should turn our back to refugees and make their miserable predicament even worse," Karsakovas said.

Meanwhile organizers of a counter-rally argued that "accepting refugees will bring security problems".

"Do you want to have here what happened on the New Year's eve in Cologne, in the French port of Calais? We do not," said Julius Panka, vice-president of the Lithuanian Nationalist Youth Union.

He said he had not encountered what he called "the refugee problem" first-hand, but based his position on other European countries' experience, saying he would be worried about his "wife and daughter, particularly about women".

"People who are coming here cannot be integrated or assimilated. Huge problems arise wherever there is a clash of cultures," Panka said.

The anti-refugee rally of about 15 people held posters saying "Invasion of Muslim colonialists in Europe is the real hybrid war" and "Lithuania is not multi-culturalist jungle".

Both supporters and opponents of refugee resettlement have previously organized small-scale rallies in Lithuania.

The country has agreed to take in 1,105 refugees from the Middle East as part of the EU's resettlement programme, but so far only four people from Iraq have arrived in Lithuania.

Over 110,000 migrants have crossed the Mediterranean into Europe since the beginning of this year. Last year, over a million people came to the continent, according to the International Organization for Migration.

Lithuanian carriers are being hit by significant losses caused by migrants trying to get to the UK on...

Refugees being used as a weapon of war by Russia, says Minister Linkevičius

Refugees are being cynically used as a leverage by Russia -backed Syrian regime in peace...

The European Union 's response to Greece 's requests for refugee relocation has been disappointing...

Refugee resettlement in Lithuania and EU 'is failing' (1)

Lithuania and the European Union is likely to fail to implement the refugee resettlement plan,...