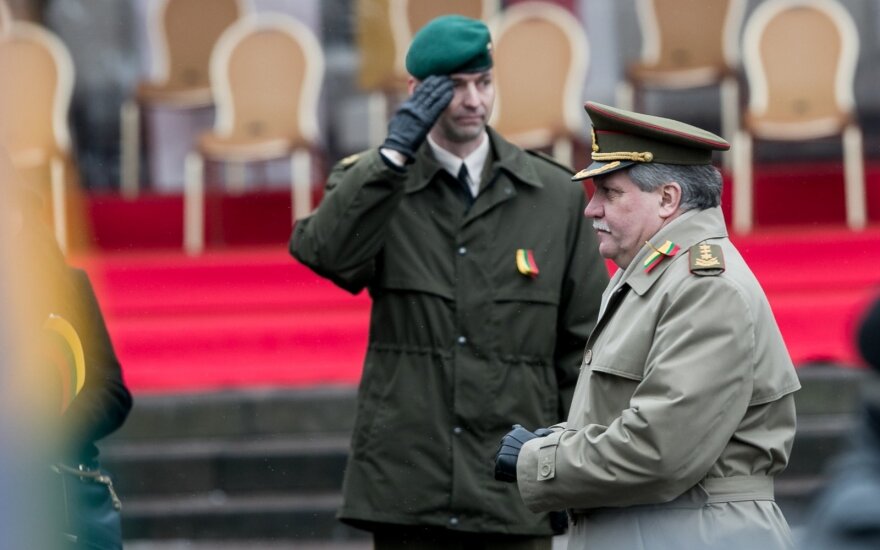 He hopes the funeral of this outstanding figure important for the army and the society will have a positive impact on the conscription of young men and will invite them to think "about history and future".

"It’s a great example for us, the Lithuanian army, the society, especially young people in Lithuania, young soldiers who join the Lithuanian army. It's a great understanding of one's duty, one's oath, its execution till the death, and sacrifice for your country," Žukas told journalists after arriving in St Johns' Church to the partisan commander's state funeral.

"He's our commander," the chief of defense said, asked about Ramanauskas-Vanagas' importance for the army.

The general also backs the idea of including the partisan leader's book of memories into the secondary school curriculum.

Vilnius is hosting a solemn state funeral for Ramanauskas-Vanagas on Friday.

His remains were discovered at the Orphans' Cemetery in Vilnius later this year.

The coffin covered with a Lithuanian tricolor was on Friday morning brought to Vilnius University Saint Johns' Church and was met by members of the family, Lithuania's Chief of Defense Lieutenant General Jonas Vytautas Žukas and sanctified by Vilnius Archbishop Gintaras Grušas.

At noon, President Dalia Grybauskaitė, Prime Minister Saulius Skvernelis and Speaker of the Seimas will honor the memory of the partisan leader, and members of the public will be able to pay final respects until the evening.

The funeral will take place at Antakalnis Cemetery on Saturday afternoon.

Ramanauskas-Vanagas, the commander of the Dzūkija region in southern Lithuania, was among the partisan leaders who signed the Union of Lithuanian Freedom Fighters' Declaration in 1949.

Partisan groups began to form in Lithuania in 1944 in response to Soviet repressions and deportations and forced conscription to the Red Army. The organized armed resistance against the Soviet occupation ended in 1953.

Ramanauskas-Vanagas was arrested by the Soviets in 1956 and was executed a year later.

His remains were discovered and identified earlier this year.

Vilnius is hosting a solemn state funeral for Adolfas Ramanauskas-Vanagas , a Lithuanian armed...

Archeologists have found the remains of Lithuanian partisan Albinas Ivanauskas at the Orphans'...