DELFI EN
aA
Dmitry Kiselyov, controversian Russian journalist and close ally of President Vladimir Putin, has set his eyes on Lithuania. He has revealed plans to develop a Russian news channel in Vilnius. 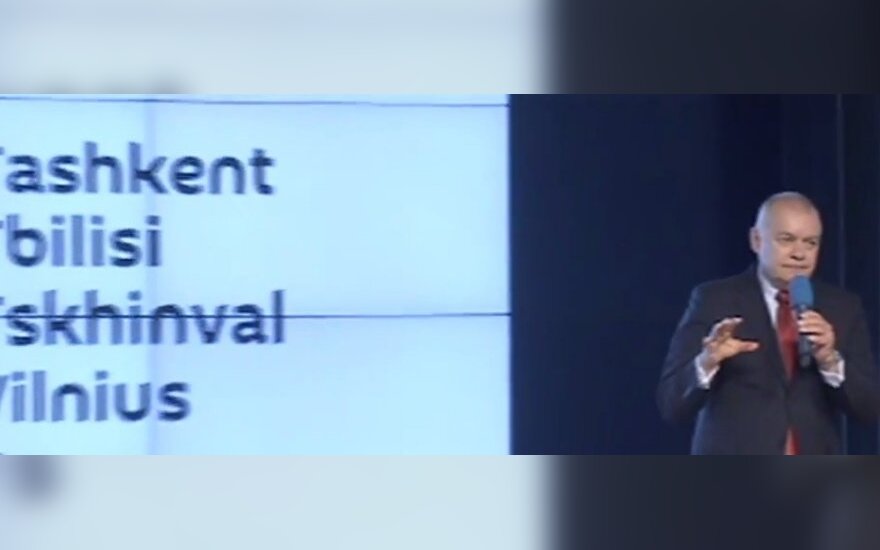 It has been recently announced that the Russian government is setting up a new foreign news agency, Sputnik, which is to be run by Kiselyov. Sputnik's expressed goal is to tackle "aggressive propaganda" from allegedly Russophobic Western media.

One of Sputnik's news desks is to be based in Vilnius, as has been announced by Kiselyov recently. During the project's presentation event, he said that "multimedia news desk" will operate from Vilnius, Riga, Tallinn, Kiev and other cities.

The exact size of the Vilnius news desk has not been revealed yet, but Kiselyov has said that various Sputnik branches will employ 30-70 or even 80 people.

In all, Sputnik is to operate from 30 cities ranging from Washington, D.C., to Beijing.

Need to get ready

Lithuanian commentators have met the news with alert, saying that the main objective of the new Russian information channel - which will broadcast in English and other languages rather than Russian - is to spread propaganda messages, especially among the youth.

"The concept of information war is clearly defined and we in the Baltic states are among its targets," says Lithuanian MP, chairman of the National Security and Defence Committee Artūras Paulauskas. "Our youth no longer speaks Russian, their second language is English. It is clear who the targets of all these channels are. Russian-language channels are intended for the older generation and Russian-speakers."

Political Scientist Nerijus Maliukevičius of Vilnius University agrees that Sputnik will be a channel of anti-Lithuanian propaganda targeting the youth.

He adds, however, that Sputnik is less well prepared for operations in Vilnius than in Riga or Tallinn, since there have so far been no plans for Lithuanian-language programming, as opposed to Estonian or Latvian.

"Among the languages [of Sputnik's programming] they give Latvian, Estonian, but not Lithuanian," according to Maliukevičius.

He insists that Lithuania must prepare for the challenge of Sputnik, whose goals leave little doubt, not least because of Kiselyov. The Russian journalist has gained particular notoriety in the West for his statement made during the Crimean crisis that Russia is "the only country in the world capable of turning the USA into radioactive dust".

Back to the USSR

Maliukevičius calls the entire Sputnik project a revival of Cold War-era ideological battles. Not coincidentally, he says, the new channel will be called after one of the most iconic symbols of the USSR's might.

"We see a repetition of the Soviet narrative. Sputnik symbolizes the Soviet Union's space glory. It is a reference to the propaganda tools of the times, to contemporary ideological battles," Maliukevičius notes.

He adds that the new Sputnik might not limit its operations to journalism and propaganda: "In the Soviet tradition, special services were often involved in the media."

The New York Times columnist: US will trade Eastern Europe for Iran (2)

The United States may turn a blind eye to the big Russian military build-up on the Ukrainian border...

How to counter intensifying Russian propaganda campaigns that have been targeting Lithuania lately?...

CNN's withdrawal from Russia - Kremlin's next step in isolating population

Journalist Romas Sakadolskis says that recent news of the US news broadcaster CNN withdrawing from...