BNS
aA
Bilingual street signs will not be legalized in Lithuania during the adoption of the Law on National Minorities, Lithuania's Social Democratic Prime Minister Algirdas Butkevičius says. 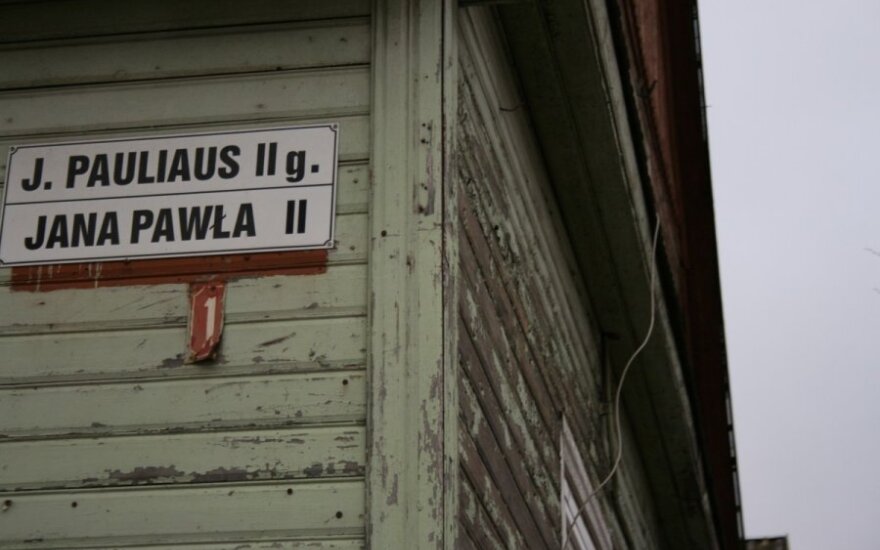 "In terms of the draft Law on National Minorities, I can say very responsibly that it has been agreed in the (Social Democratic – BNS) political group that there will be no two languages in regions, there will be no bilingual signs. But certain provisions, I think, will be adopted," the prime minister said after Tuesday's meeting with the opposition Homeland Union–Lithuanian Christian Democrats political group in the Seimas.

The prime minister also spoke against associating the spelling of foreign names using Latin-based characters in ID documents with the Polish ethnic minority.

"Judging from the letters we have received on this law, 97 percent of them came from Lithuanian women who are married to foreigners or over the fact that their children were born abroad. And I would like to say that this law should not at all be associated with the Polish national minority in our country," the prime minister said.

On Tuesday, the Seimas is set to get back to discussions on the proposed Law on National Minorities and the Spelling of Names and Surnames. They would allow the spelling of foreign names in their original form using Latin-based characters and would also allow wider use of the Polish language in public. The bills were on the parliamentary agenda last week but were later postponed.

The ruling parties have previously pledged on numerous times to adopt the Law on National Minorities, initiated by the Electoral Action of Poles in Lithuania, a Polish party which is part of the ruling coalition.

The bill initiated by EAPL MP Jaroslav Narkevič suggests reinstating the version of the law that was in effect in the early years of Lithuania's independence. Under the bill, state institutions and organizations in areas with large populations of ethnic minorities would allow the use of the minority language along with the state Lithuanian language, with signs in the language of the national minority allowed the Lithuanian ones.

Two alternative draft Laws on the Spelling of Names and Surnames are also on the Seimas' Tuesday agenda.

The bill drafted by Social Democrats Šiaulienė and Gediminas Kirkilas will allow the original spelling of names using non-Lithuanian Latin-based characters on the main passport page.

Meanwhile under an alternative bill drafted by a group of lawmakers, the original name spelling would be allowed on a separate passport page. Conservative MP Valentinas Stundys, one of the authors of the latter bill, has said it is a compromise solution as it would be more easily compatible with the status of the Lithuanian language as the state language and subsequent requirements.

Vietnamese-Lithuanian among top school graduates in the country

Mai Nguyen Ngoc, whose family is of Vietnamese origin, has passed the Lithuanian state language exam...

On Tuesday, the Seimas of Lithuania started discussions on the proposed Law on Ethnic Minorities, a...