BNS
aA
Pope Francis on Sunday called on the faithful in Lithuania to care for socially vulnerable groups and ethnic minorities and resist the thirst for glory. 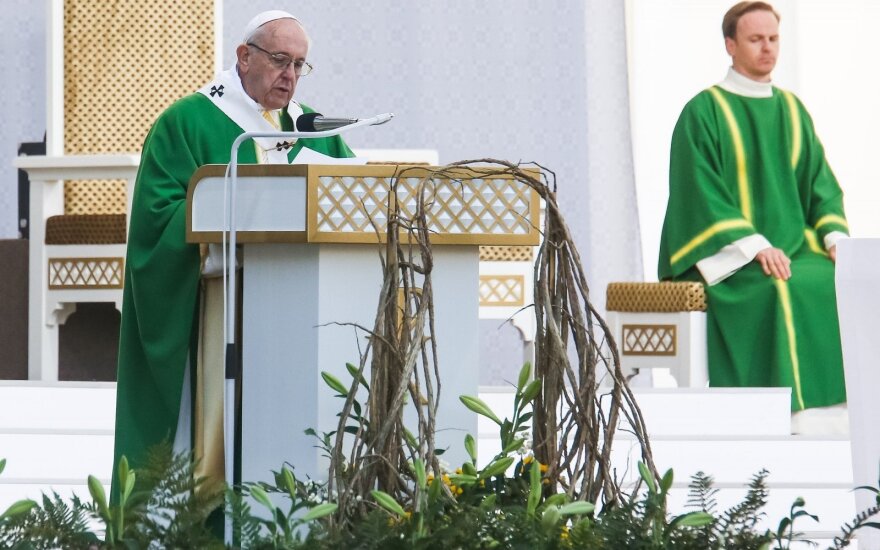 Pope Francis addressing to more than 100,000 people in the Santara Park in Kaunas
© DELFI / Lukas Bartkus

Addressing more than 100,000 people in the Santara Park in Kaunas, Lithuania's second-largest city, the head of the Catholic Church called on people to not distance themselves from the society, believing that its "somebody else’s responsibility".

"Who will be the smallest, the poorest in our midst, whom we should welcome a hundred years after our independence?" the pope said.

"Perhaps it is the ethnic minorities of our city. Or the jobless who have to emigrate. May be it is the elderly and the lonely, or those young people who find no meaning in life because they have lost their roots," the Holy father asked.

He also called on the faithful to resist the thirst of glory.

"Brothers and sisters: the thirst for power and glory is the sign of those who fail to heal the memories of the past and, perhaps for that very reason, to take an active part in the tasks of the present. They would rather discuss who was better, who acted with greater integrity in the past, who has more right to privileges than others," Pope Francis said.

"In this way, we deny our own history, “which is glorious precisely because it is a history of sacrifice, of hopes and daily struggles, of lives spent in service and fidelity to work, tiring as it may be," the Holy Father said.

"Lithuania as a whole can testify to it, still shuddering at the mention of Siberia, or the ghettos of Vilnius and Kaunas, among others," he said.

On Sunday afternoon, the pope will honor the memory of Nazi and Soviet victims, visiting the former Vilnius Ghetto and the former KGB prison in Vilnius which now houses a museum.