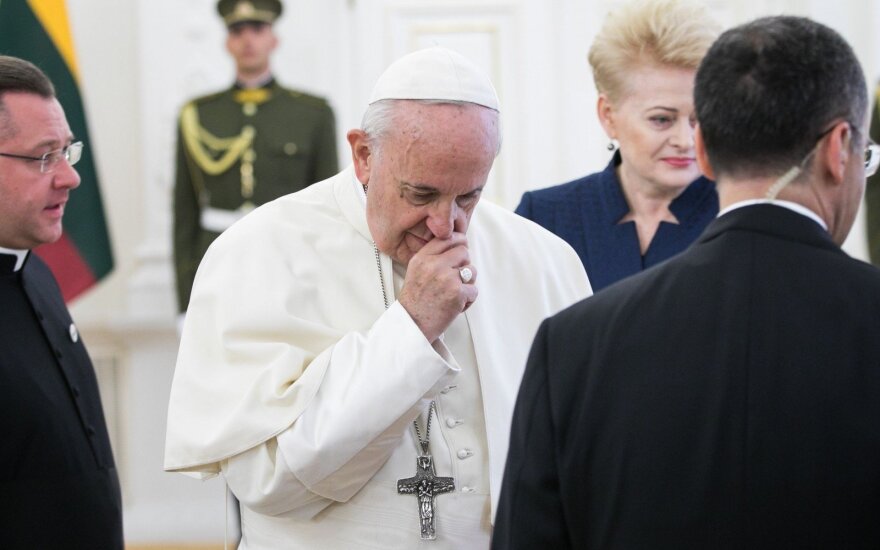 Reminiscing of history and meeting with people, the pope might use his visit to encourage Lithuania, Latvia and Estonia to learn the occupation lessons, La Satmpa journalist and author Andrea Tornielli said.

One of those lessons is to open up for immigrants, just like the West opened up and accepted people from the Baltic states when they escaped the Nazi and Soviet terror.

"It is interesting how the pope would try to evaluate the development of these countries but also the risk of a kind of identity that is not open to all people, for example, immigrants," Tornielli told BNS Lithuania. "Having in mind that some countries in Europe have some sense against immigrants, I think that something like urging to remember the past and think that peace and country building needs to happen while being open and remembering the Christian values would be interesting."

Several years ago, Lithuania, Latvia and Estonia agreed to accept the burden og refugees from the Middle East with southern European countries but resisted the introduction of a quota system for relocating refugees. Meanwhile, other countries, like Hungary or Poland, refused to accept refugees at all.

The American National Catholic Reporter's journalist Joshua McElwee hopes the pope will define "the vision of a Christian Europe" during his Baltic visit.

Early this year, Pope Francis called hostility towards refugees and immigrants a sin.

Although inflow of migrants has slowed in recent years, the internal tension in Europe is being caused by totally different attitudes to what to do with the people who are still coming.

The Holy Father will visit the Baltic states after a break of 25 years but this visit will take place during radically different circumstances as the Church tries to bring a string of sexual abuse scandals involving priests under control.

McElwee says Americans are "angry and upset" over the recent developments within the Catholic Church and want answers.

In his words, it’s also important for people to know what the pope expects from the global bishop convention planned next year.

"Many people want to know what the action will be, what the pope will do to ensure that children are protected and bishops who mishandled clergy will be judged and held into account," McElwee.

The papal visit will focus on the Baltic states' history as he plans to visit the Museum of Occupations and Freedom Fights in Vilnius as well as the former Vilnius Ghetto, and later on Pope Francis visit the Freedom Monument in Riga

Pope John Paul II celebrated the independence Lithuania, Latvia and Estonia secured from the Soviet 25 years ago, and Pope Francis is likely to mention how it is important to protect freedom,

The pope's visit to the places related to Soviet and Nazi repressions should be especially sensitive, and silence would speak volumes.

A visit to the former Vilnius Ghetto had not been included into the papal visit's initial programs but he personally asked to plan some time for that as he's aware of the fact that September 23 will mark 75 years since the liquidation of the Vilnius Ghetto, the Vatican's representative in Lithuania Pedro Lopez-Quintana said.

Figures from the Holy See show that Catholics make almost 80 percent of the Lithuanian population, with slightly over a fifth in Latvia and under one percent in Estonia.

Holding ecumenical meetings with people in Latvia and Estonia, the pope will once again underline his commitment to promote unity among different Christian denominations.

The National Catholic Reporter journalist says it will be most interesting to observe the Orthodox's reactions to the papal visit to Latvia.

After almost a thousand years from the split of Christianity, Pope Francis and Patriarch Kirill met two years ago for the first time in history.

"It could be interesting to see if there is a different dynamic in the relations or if maybe they are more friendly now," McElwee said.

Pope Francis will return to Rome on Sep. 25.